Sharing the Pie with the King’s Men 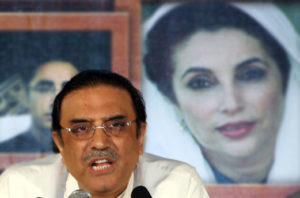 Survival is the end game: Asif Ali Zardari has wheeled and dealed to keep the PPP government alive. He should get some credit for keeping the country on the democratic path, says D. Asghar.

Four years ago, the idea that a man who had languished in Landhi jail for too long, lived under the shadows of his illustrious wife and was perceived as a political liability to the largest party of the country would emerge as its saviour and become the President of Pakistan was totally ludicrous. Yes, life is all about surprises, and this, in particular, turned out to be a rather rude surprise for many of the man’s diehard haters and detractors.

Benazir Bhutto’s untimely and ill-fated demise in Rawalpindi left the baton in the hands of a highly loathed and criticised Asif Ali Zardari. But he took the shattered party and using the slogan of “Pakistan Khappay” he ousted a rather cornered and paralysed former General. Timing perhaps was on his side. Or was it a gift of fate for years worth of incarceration for unsubstantiated charges. After almost a decade of a dictatorial regime, it was a strange coincidence that a man once remembered and scorned with the number 10 took the oath of the highest office of the land.

Yes, democracy turned out to be the sweetest revenge for him. Endlessly plagued, chastised and demoralised by his detractors, he remained determined to rewrite a new chapter. Pragmatism replaced the usual victimisation of the rivals and dialogue not dislodge took the centre stage. The long and stained history of political enmity was buried and (it seemed) that bitter rival, Nawaz Sharif was invited to join hands.

The Murree Declaration was signed by both. This was a follow up to the Charter of Democracy, envisaged by the late Benazir Bhutto and Nawaz Sharif. All was going well. However for a nation full of tragic and beleaguered political history, these festivities were fairly short lived. Thorny issues, such as the restoration of the Chief Justice and other partisan bickering, led to their divorce.

The unseen-yet-most-powerful forces of the nation were delighted with this break up. If this union would have survived, it could have potentially dismantled the myth of their necessary dominance for good. In the end, it was the good old game and the forces in the shadows stood beaming with pleasure.

Asif Ali Zardari and his list of political blemishes (real or perceived) may be long, but he deserves some credit for keeping Pakistan on the path of democracy after the 2008 elections. Even a fragile democracy is a million times better than dictatorial rule. In a fragile democracy, parties of common interests form a coalition to govern. Often the parties may be poles apart in terms of ideology, but circumstances bring them closer to form a rather weird alliance. Differences are hashed out, common grounds are negotiated and progress is achieved through dialogue.

Left in the lurch without coalition partners, Zardari made some tough choices. Actually, it was more do or die. For him, joining hands with bitter adversaries created and crafted by the former President-General was a big gamble in the political casino. Once termed leaders of “The King’s Party” and “The King’s Men,” the Chaudhrys of Gujrat, who were once considered bitter rivals of the PPP, were brought on board to save the withering coalition, even though these same brothers were once accused by him for being somewhat behind the murder of his wife. Survival is the end game and thus swallowing that bitter pill was necessary to remain alive.

The deal was sealed with the usual give and take. Q Leaguers wanted ministries and the new role of Deputy Prime Minister. As the saying goes, everything was accepted and thrown in including the kitchen sink in order to bring the Q Leaguers on board.

But what was termed as the “deal to strengthen democracy” was overshadowed by much bigger news — news that quickly drew people’s attention around the globe and in Pakistan: it was about a man and his “mansion” in Abbottabad.

Nonetheless that didn’t change the minds of political pundits who have written off this alliance as a non-starter. The PML-Q camp that signed the dotted line has a history of opportunistic politics. They have deserted their former parties to go along with the pied pipers of the moment. This reality was perhaps factored into the equation when the PPP decided to yield to this arguably new political low.

For those who have been watching all of these developments from the sidelines, it appears to be a very well thought-out plan. The PPP, despite its waning popularity, has the real players in its bag. On one hand it has the MQM in Karachi and urban Sindh, and on the other it now has the crutch of the Q League in the Punjab. Add to that the ANP in KP and in its own presence in rather volatile Balochistan. It seems like every inch of the political landscape around the nation has been covered.

All this corners the PML-N and the reality of the matter is that it leads Sharif with no other option but to rally his former ideological partners on the religious right. Despite their never-ending rhetoric, the religious parties do not have a winning vote bank. With all the upheavals caused by the “honourable”, historically they have been dismissed as a real political entity come election day.

This leaves Mr Sharif with the emerging blue-eyed boy of the establishment, Mr Imran Khan. If truth be told, Mr Sharif will probably have to partner with the cricket hero to gain some mileage. Needless to say, the remaining Q Leaguers who did not go along with this deal will have to make a choice to jump in bed with Mr Sharif as well. Giving heed to his recent statements, Mr Sharif is playing safe on all frontiers. On one day he criticises the establishment for the Abbottabad security lapse, and on the other he chimes in with the message of Mr Khan, giving some anti-US statements pertaining to its affairs in Pakistan.

The million-dollar question, which remains unanswered at this point, is where will all this lead? Will another leader return from his exile? Yes Mr Musharraf has made some announcements to make his comeback prior to March 23. But only someone with a really accurate crystal ball can predict which side will he end up with. It will be an interesting 2012. Clearly the manoeuvring has begun.

Participate in the poll below: