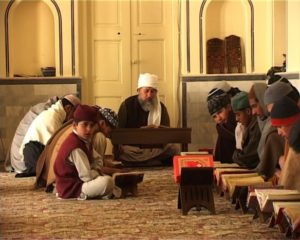 The trouble with madrassas: A still from “The Battle for Pakistan.”

The Battle for Pakistan, a Newsline Films/SAMAA TV co-production, was screened at Film South Asia 2009, in Kathmandu. It was picked as one of the top 12 festival films to be included as part of Travelling Film South Asia (TFSA) 2011.

The documentary investigates the nexus between madrassas and extremism in Pakistan. Since its 2009 debut, the film has been screened at a number of venues in Asia, Europe and the USA.

TFSA kicks off in Karachi at T2F on Friday May 20 at 6pm with a screening of this important film directed by Maheen Zia and produced by Tehmina Ahmed.

Here is more about TFSA 2011 and the other films to screened, courtesy of T2F:

Join us at T2F for 3 days of documentary film screenings from India, Bangladesh, Nepal, Sri Lanka, and Pakistan

The 12 touring documentaries of Travelling Film South Asia are outstanding examples of non-fiction productions of the last three years from India, Bangladesh, Nepal, Sri Lanka, and Pakistan. They have been selected from the 35 documentaries screened in the competitive section of Film South Asia ’09, the ‘mother festival’, held in Kathmandu in September 2009. The selection has been carried out in consultation with FSA ’09’s three-member jury, chaired by Chennai-based cultural critic, Sadanand Menon.