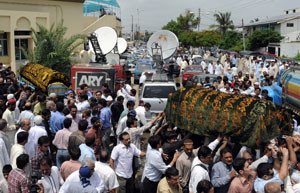 Pakistan’s military and bureaucracy are the state institutions whose lack of transparency is best known. But Pakistan’s Civil Aviation Authority (CAA) is now arising as a challenger amidst the already swollen ranks of those who suppress the truth in this country. The authority has yet to release the details behind the tragic Airblue crash of July 28, 2010, a fatal morning for the 152 people who boarded flight ED202.

The 146 passengers and six crew members left behind families who have yet to discover the cause of the crash that forced the untimely deaths of their loved ones. They seek closure in an attempt to find solace. Knowing the cause of what killed their family members and being sure such accidents are made less likely — via an honest investigation where the causes are reported and safeguards and solutions are then implemented — are critical elements of this.

But the families of the victims have been kept in the dark. Shahid Khaqan Abbasi, the founder and chairman of Airblue, has claimed that it is the government’s responsibility to make the results of the inquiry public. Meanwhile, a press release issued by the CAA states that the tragedy has been thoroughly analysed and the investigation report will only be released after the companies involved in the manufacture and design of the aircraft, including Airbus and International Aero Engines (IAE), as well as foreign aviation investigation agencies, such as BEA (France) and BFU (Germany), have the opportunity to review the report and provide their comments. In the same document, however, the CAA states that the government possesses the authority to release the report without the prior approval of the international aviation companies involved. And even if the findings are deemed to be incomplete while awaiting the feedback of international stakeholders, the Express Tribune has pointed out that the International Civil Aviation Organization does recommend sharing “an interim report on each anniversary of the occurrence, detailing the progress of the investigation and any safety issues raised” in situations when the “final report” takes more than 12 months to release.

So where is the report then?

Sadly, accountability and trust of those in the corridors of power is severely lacking in Pakistan. And so, many people believe a key reason for the delay of the release of the investigation report might be because of high-profile stakeholders who could potentially be damaged by it. The chairman of Airblue, Mr Abbasi, is a well-connected PML-N member of the National Assembly. Meanwhile, the CAA, which is responsible for air traffic control and navigation aid systems, is arguably keen to divert attention from itself — the government gets enough bad press — and given that on the morning of the crash the weather around Islamabad was far from perfect with rain and fog, everyone with a connection to ED202 is curious about all the interactions that morning between the pilot and air traffic control.

But the plot thickens. The inquiry reports of the past 16 air crashes involving Pakistani commercial carriers, using aircraft made by producers as diverse as Boeing, Douglas DC and Airbus, have never been released.

In this 2010 Newsline report, Zara Farooqui writes about some of these unpublicised reports:

“The government has a history of concealing plane crash findings of the Civil Aviation Authority (CAA) from the public eye. They are yet to make public the findings of three previous major plane crashes: the 1988 crash that took the life of General Zia-ul-Haq; the 2003 crash near Kohat that took the life of Air Chief Marshal Mushaf Ali Mir and 16 other officials; and the 2006 crash at Multan airport that took the life of all civilian passengers on board. In the case of prominent public figures being involved, it is understandable why such findings may be concealed, but what, asked an unnamed CAA official in Dawn, stops the government from revealing details of crashes such as the Multan Fokker crash?”

With little precedent for transparency, we now seem to have another unexplained air crash, pushing our grand total up to 17. And it is the grieving families and friends left behind that feel this injustice the most.

Release of the Final Report

6.5
In the interest of accident prevention, the State conducting the investigation of an accident or incident shall release the Final Report as soon as possible.

6.7
When the State that has conducted an investigation into an accident or an incident involving an aircraft of a maximum mass of over 5 700 kg has released a Final Report, that State shall send to the International Civil Aviation Organization a copy of the Final Report.