Reactions to Killing of Unarmed Man by Sindh Rangers 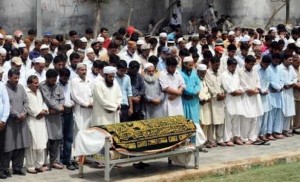 It has been a week since a group of Sindh Rangers shot an unarmed man in Karachi and watched him slowly bleed to death.

Sarfaraz Shah, 19, was accused of theft. Initial reports alleged that he had been targeting people in Shaheed Benazir Bhutto Park near the Boat Basin area of Pakistan’s largest city and holding them up with a toy gun. Some reports say he managed to snatch a cell phone, others say a purse. Whatever the case, he was handed over to the Rangers present on the scene. They killed him.

News of the tragic story travelled fast – thanks to the power of the camera. Cameraman Abdul Salaam Soomro from the Sindhi television channel Awaz recorded the incident. The video footage was released to the media. Immediately it was shown across television stations, posted on YouTube and shared on Facebook.

The public uproar was huge. The government was forced to take notice of the extrajudical killing. As of June 14, police had arrested six paramilitary soldiers related to the incident who will be tried under anti-terrorism laws. The Supreme Court stepped in too. The apex court ordered the government to remove Major General Aijaz Chaudhry, head of the paramilitary in Sindh province, as well as Fayyaz Leghari, police chief of Sindh.

Below Newsline publishes some reactions to Sarfaraz Shah’s death and the video that rightly turned the killing into a national incident (and a moment of shame):