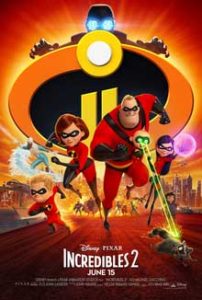 This sequel took fourteen long years in the making, but Brad Bird’s Incredibles 2 is every bit as enthralling as his 2004 masterpiece. It may not boast the most original superhero storyline, but it is a spectacular show of how far animators have come in the last decade.

The shift from Metroville to New Urbem, three months after the defeat of the Incredibles’ primary rival and the movie’s antagonist Syndrome, has not been easy for our superheros. The Incredibles/Parr family, consisting of Bob (Craig T Nelson), Helen (Holly Hunter), Dash (Huck Milner), Violet (Sarah Vowell) and Jack-Jack (Eli Fucile), have been shunned from their city due to the destructive fall-out of their heroism and are now faced with a new super-villain, Screenslaver. Elastagirl takes front stage in this film and is pitted against a diabolical female villain in a refreshing departure from the traditional male-dominated world of animated superhero films. Intentional or not, this may even represent a disassociation from the dark side of the company, which is embroiled in accusations of sexual harassment from the likes of Harvey Weinstein and John Lasseter.

However, while the female-centric storyline may signify a more updated approach, the narrative itself (not the characters) may appear to lack freshness.  Even though the film is riddled with plot twists, there are very few that we haven’t seen before — civilian turns into super villain, seeking vengeance after her heroes fail to do their job — a classic.

Incredibles 2 is a film that holds family as central to its narrative; this feature gives the movie its warm, Disney feel. We see a heart-warming depiction of the close bond this family shares when the Incredible children whip through the streets of their new city in the Incredibile (Mr Incredible’s version of a Batmobile)  to save their parents who are both under the influence of Screenslaver. The director describes it as a “popcorn film,” yet some fans see it as so much more. Fourteen years is an incredible (pun- intended) wait, long enough for devoted fans, who are now young adults, to finally re-live their childhoods, and just the perfect amount of time for the franchise to gather a new generation of Incredibles fanatics.

A frequent struggle for directors in this genre is being able to perfectly balance expert animation with a relatively believable story line that makes movies relatable. In essence, it is to make the audience forget that they are watching an animated film, while at the same time allowing them to fully appreciate the skillful work undertaken to bring the narrative to life. Using their prestigious animation tool ‘Presto’, Brad Bird’s team have succeeded in many respects, ensuring smooth character movement, seamless scene transition and a stunning visual presentation of the characters’ emotions. Be it in the presentation of humorous Jack-Jack’s ever-increasing superpowers, or the thrilling final battle against Screenslaver, the team does a remarkable job of endearing its characters to the audience and building up the tension.

Incredibles 2 has, in many respects, successfully escaped the curse of disappointing sequels, impressing even those long-term fans of the franchise who went into the film not knowing what to expect after fourteen years. Even though Bird’s work may not have set it apart from the classic superhero film, its slick animation and thoughtful presentation of family dynamics ensures that this is not just any superhero film. It is an Incredibles film that continues to strengthen  its emotional connection with cinema-goers.