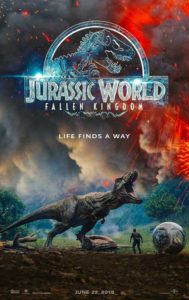 J. A. Bayona, director of the acclaimed horror film The Orphanage (2007), had big boots to fill when he stepped up to direct the second installment of the Jurassic World trilogy: Fallen Kingdom. Bayona inherits the mantle from his predecessor Colin Trevorrow, who amassed $1.67 billion with his 2015 blockbuster Jurassic World. It was no easy task for the director to do justice to the most recent offering in a line of films that critics had labeled “an unnecessary re-boot of the original films.”

The island of Isla Nublar is as it was when the first movie concluded — a mix of ravaged forests, scattered rubble and dinosaur bones — but now faced with the looming threat of a volcanic eruption. The story, penned by writers Colin Trevorrow and Derek Conolly, is driven by the central objective of saving the dinosaurs of the island from extinction.

Fans took their seats expecting (or after the first film, hoping for) epic dinosaur-human and dinosaur to dinosaur encounters on the Island they have been familiar with for over two decades. Instead, the writers abandoned the jungle terrain of Isla Nublar for the posh mansion of Benjamin Lockwood (James Cromwell), as the scene for most of the dramatic brawls. Despite this, the location does allow Bayona to experiment with some tense  hallway chases (inspired by his 2007 horror film The Orphanage) involving one of the movie’s more tender characters, Lockwood’s granddaughter Maise (Isabella Sermon).

The film is an effective presentation of what a well-endowed VFX department can deliver, with the dinosaurs looking more ruthless and blood-thirsty than ever before (especially Indoraptor, the antagonist of the film). While an overwhelming story-line moves much too fast for some fans,  Bayona’s efforts to present this far-fetched tale on screen are not without merit. A clever, often humorous screenplay and breathtaking cinematography do a good job of breathing life into the relationship between man and beast, particularly Owen and his raptor Blue.

Chris Pratt, Hollywood veteran, is able to maintain the same level of performance that earned him great praise in the first film. Playing Owen, a witty, broad-shouldered explorer, he adventures through the jungles of Isla Nublar, driven to save the creatures he cares so dearly about. With the dauntless Claire Dearing (Bryce Dallas Howard) by his side, the movie gives us no indication that they will fail. Yet, in truly cinematic fashion, with all the odds stacked against them, they do. Bayona takes this moment of failure and from it creates a scene of cinematic greatness, with a heart-rending, dramatic depiction of magma consuming the remaining dinosaurs of Isla Nublar, as the crusaders helplessly watch from a distance. Perhaps the film’s greatest success is that it does not give the audience what itexpects. It builds anticipation and establishes a clear pathway for another installment in the franchise. But this is also its weakness.

Fallen Kingdom is not the reboot that does justice to Steven Spielberg’s masterpieces, falling short in many respects, something we were all aware of going in. It is a difficult task for any director to match Spielberg’s cinematic prowess. For what it is worth, however, Bayona made the most of what he could with an overly ambitious script, frequently leaving the audience on the edge of their seats. The film had a strong opening and according to Forbes, it has bagged over $710 million (as of June 25, 2018) at the box-office.

The final film of the trilogy is set to be released sometime in the summer of 2021 and it remains to be seen whether Trevorrow, who will return as director of the next film, can rebuild Bayona’s ‘Fallen Kingdom’.