On the first day of the year, Pakistan’s consumer economy grinds to a halt. The…

Life Below the Line

Bushra kisses her son, Zubair, and daughter, Saima, for the last time. They are five…

The judges’ issue still looms large on the horizon, blurring all else from the vision…

For the past three to four years, the Quetta Press Club, in largely conservative Balochistan,…

The government of the Pakistan Peoples Party is facing two clear choices. It can take…

“After my demise, my ashes should be immersed in the rivers of South Asia so…

Vienna reeks of death. It may be a subtle reek, but it’s an old, lingering…

Up-and-coming fashion designer Fahad Husayn’s collection is graceful and feminine. Be it the hues of…

Societal flux imperils human values compelling the conscientious to voice their concern, and in the…

A foreign traveller arrives at the court of Mughal Emperor Akbar at Fatehpur Sikri with a secret. “Only one man may hear my secret and live,” says the tall, yellow-haired Florentine. That “one man” is Akbar. The traveller uses many names, lies and tricks (some illegal) in order to cross the globe to reach the red sandstone palaces of Sikri. Carrying just a carpet bag and wearing a “coat of coloured leather lozenges,” he stows away on a ship, charms the Scottish captain who demands to know his secret, then watches as that same captain collapses as the secret is told. This is just what the mysterious traveller wants. For when the ship hits the Indian shore, not only does he slip away with the captain’s treasures but also with a letter from the Queen of England stamped with her personal seal. The multi-talented, multi-lingual Florentine has what he needs to win an audience with Akbar: the official letter making him England’s ambassdor. 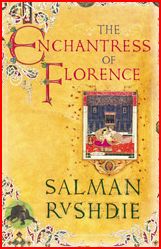 It is a magnetic beginning that makes Salman Rushdie’s latest novel, The Enchantress of Florence, immediately enchanting itself. The story reads like an epic fable that comes to life so vividly it casts a spell on the reader. Fittingly, this effect mirrors what happens in the novel. The story and heroine at the core of the traveller’s secret have the same magical qualities. The bold storyteller, NiccolÃ² Vespucci, tells Akbar of a lost Mughal princess, Qara KÃ¶z, Lady Black Eyes, with a legendary beauty so spellbinding that men and women alike would be immediately entranced upon laying their eyes on her.

Lady Black Eyes was Akbar’s great-aunt, claims Vespucci, his grandfather Babar’s sister. She was lost to an Uzbek king after a military defeat, never to return to her family — a story corroborated by the elder ladies of the court. But Vespucci’s next claim, that he is her son and thus Akbar’s uncle, is hard to believe. Should Akbar trust this foreigner who calls himself Mogor dell’Amore (Mughal of Love) as his kin, or is the visitor a fraud? Vespucci wins the chance to tell his tale in full, and like Scheherazade in the Arabian Nights, he stretches his story so that it lasts for months.

It is within this structure that Rushdie has two worlds, East and West, meet. At Fatehpur Sikri, Rushdie creates the grandest of rulers and courts. The lake at the doorstep to the palace-city is “like a sea of molten gold.” Akbar is not just a king and unmatched warrior, but a philosopher who wants peace. He surrounds himself with a multitude of factotums (including a designated flatterer) and the court is populated with caricaturised courtesans, clerics, spies and treacherous sons. Sikri is rich, extreme, fantastical — and on the verge of modernity. For Akbar wants to conjure a new world: “a world beyond religion, region, rank and tribe.”

And when Vespucci describes Florence through the story of Qara KÃ¶z (she travels west as the willing spoil of war to a succession of military victors), the emperor realises that the world of 16th Century Florence is not so different from his own India. It is filled with war, power politics and magic too. But there’s more. Rushdie shows a mirror Renaissance being sowed under Akbar, marked by enlightenment, humanism and religious reform. Still, while similar ideas seem to be developing in distinct cultures unconnected to one another, Akbar sees an advancement and superiority in his empire that reveals that all is not equal. The east looks west and is unimpressed.

Within Rushdie’s story of intertwining worlds are themes of power and kinship, love and lust, survival and legacy, God and freewill, destiny and possibility, change and growth. It is an intricate tale, dense with both fact and fiction. And this is where much of its magic lies. This is historical fiction at its wildest. Rushdie has constructed a fairytale with the bricks of the past. His six-page bibliography, naming almost 100 sources, is a testament to that. There are stories within stories, fiction that borrows from history (NiccolÃ² Machiavelli joins a long list of ‘real’ characters) and fantasies that become real. Even Akbar’s favourite queen, Jodha, is just a figment of his imagination, his ideal wife. Says Rushdie, “It is absolutely clear to me from historical reading that the character of Jodhabai didn’t exist.”

In The Enchantress of Florence, the line between fantasy and reality are blurred in more ways than one. So what is true? Akbar finds out that it is not easy to tell. Nonetheless, all of us have to decide what to believe. And we can’t rely on others to tell us. It is those choices, choices of belief that spur us to action, and sometimes lead us to err. And for Akbar, the idealist and the dreamer, he realises that we are often left looking back at what was lost, what could have been.

But by bridging east and west, Mogor dell’Amore provides Akbar with a more important truth: “The curse of the human race is not that we are so different from one another, but that we are so alike.” This is what the author, who spent a decade under the shadow of a death sentence, is hoping that the rest of us, in our increasingly polarised world, understand: our similarities outnumber our differences.