We begin the new year on the brink, not unusual for a country that is…

In a country where anything can happen any time, forecasting is a hazardous and potentially…

In the Karachi versus Lahore debate, Karachiites gloat about the fact they have a beach…

“It was a germ that was born at the back of a classroom,” says recent…

Boy on a Mission

Currently studying at the London School of Economics, Mohsin Rasheed was an individual who I…

Of Triumphs and Tears

Maintaining peace during Moharram has been a huge challenge for successive governments in Pakistan, but…

Halfway through my chat with Ali Gul Pir in a cafe, we are interrupted by…

Ask-i-Memnu (locally titled Ishq-e-Memnu), the steamy Turkish soap — dubbed in Urdu — that has…

The Year in Review

Cinema, that most sumptuous feast for the eyes and soul, has been a particularly filling…

Why is a man, who is not even eligible to contest the general elections on…

The Many Faces of Hina

“I am not a comedienne, I am a versatile actor who has done a wide…

If there is one thing indisputably true about Pakistanis, it is that we can…

While the whole of Karachi is confined to their houses, mourning the lack of CNG…

“For they kindled joy,” states the title page of the book as it mentions the…

“Rubbish is my armour,” states Beo Zafar, just moments into my interview of the comedienne…

Halfway through my chat with Ali Gul Pir in a cafe, we are interrupted by a gaggle of young women, with a couple of small children in tow. “Oh my god, you’re Ali Gul Pir,” one of them says excitedly. “We are such big fans. Can we get a picture with you?” Ali’s reaction is that of someone who is accustomed with the fame — he is equal parts sheepish, joyful and suave, and is comfortable enough with the attention that it is clear that encounters with adoring fans is a regular part of his life now.

His effortless reaction may very well be surprising, since Ali hasn’t had much time to get used to his newfound celebrity. He had been doing comedy for awhile, being part of Azfar Ali’s improvisational comedy troupe — which performed live as well as on the TV show Light on Hai, for several years — and having had worked with stand-up comedy master Saad Haroon. But it wasn’t until he uploaded his comedy sketch-cum-music video ‘Waderai Ka Beta’ on YouTube in June 2012 that he was suddenly catapulted into the limelight. The humorous video, which poked fun at Pakistan’s feudal system and the way it had spawned a generation of entitled and spoilt young people, went viral immediately and has been viewed more than 5 million times. A line in the video, “Saeen tou saeen, saeen ka kutta bhi saeen” has given birth to a plethora of popular jokes and Internet memes. His second video Taroo Maroo, uploaded a month ago, has also become very popular.

I ask him how he came up with such a novel concept for the first video. “The idea just came to me one morning, at a time when I was sharing an apartment with another guy and I was really low on cash,” he explains. “I had moved out of my family’s house after graduating from university because I wanted to experience being independent. But despite having made such an idealistic move, of course I had no money. So the whole concept of being a feudal lord’s son, and living off of your father’s money, was really fascinating to me then.” Initially, Ali planned on making a simple comedy sketch but as he was writing it, he felt that it could be turned into a song. When he showed it to people, he did not get a very enthusiastic response. Despite their reservations, Ali decided to go ahead with it. Teaming up with his musician buddies — the team is now wittily called Vital Saeens — he recorded the song and produced the accompanying music video himself, having studied filmmaking from Szabist.

But Ali admits there was a deeper thought process behind the concept. Having a feudal background himself — he belongs to an agricultural family from Daddu — he had the opportunity to study the feudal system in depth. “I have seen people in villages who are suffering because of this system,” he says. “It concerns me, the way some powerful people feel entitled to exploit others for their own benefit.” Ali received a certain amount of flak because of his video. “I received threatening phone calls and emails after the video’s release. People criticised me for targeting the Sindhis, which is really unfair because there is no mention of any ethnicity is my song. The Sindhi references in the music video are there because being a Sindhi is part of my identity. I belong to that culture.” Indeed, he maintains, his intention was not to point fingers or blame specific people. “I’m just holding a mirror up to our society and showing people what we are like,” he explains. “I’m making fun of a way of thinking. The concept of ‘waderai ka beta’ is a state of mind which is prominent in our society.” 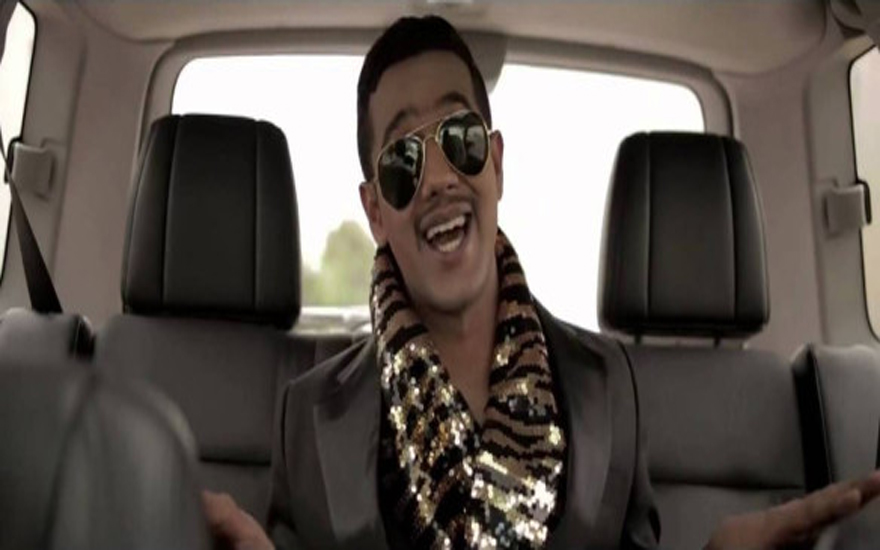 I wonder aloud whether, while making Taroo Maroo, he felt any pressure to live up to the success of his first video. “There definitely was pressure,” he laughs. “Even if you aren’t that worried, people will make sure you feel the pressure. People used to come up to me on the street and say, ‘Your next song better be as good as the first.’” The trick, he says, is not to stick to a tried-and-tested formula for your work. “I wanted my next video to be different. I didn’t want to revisit the ‘Saeen’ concept just because it worked so well the first time.” When I ask him how he prevents the fame from going to his head, he laughs. “My father always says, ‘Never forget where you came from.’ No matter where I go or how successful I become, I will always be a gaon wala at heart.”

Seeing as how his work is mainly on the Internet, it is no surprise that Ali thinks that social media is more significant than television or radio. “It was only after my video got millions of hits that television and radio channels decided to air my song and invite me to talk shows,” he says. “So I owe my success not to these channels, but to the millions of people who watched my video on the Internet.” In this day and age, Ali argues, it is important for every artist to also be a smart businessman. “You can’t create something in your drawing room and wait for someone to discover it and hand you a big fat cheque for it,” he says. “You have to put your product out there for people to see. The whole ‘starving artist’ clichÃ© is outdated now. You can be smart and earn money with the art that you create.” His effective use of the Internet earned him an Innovative Hero award, given to him by an initiative started by Google and the Punjab government. 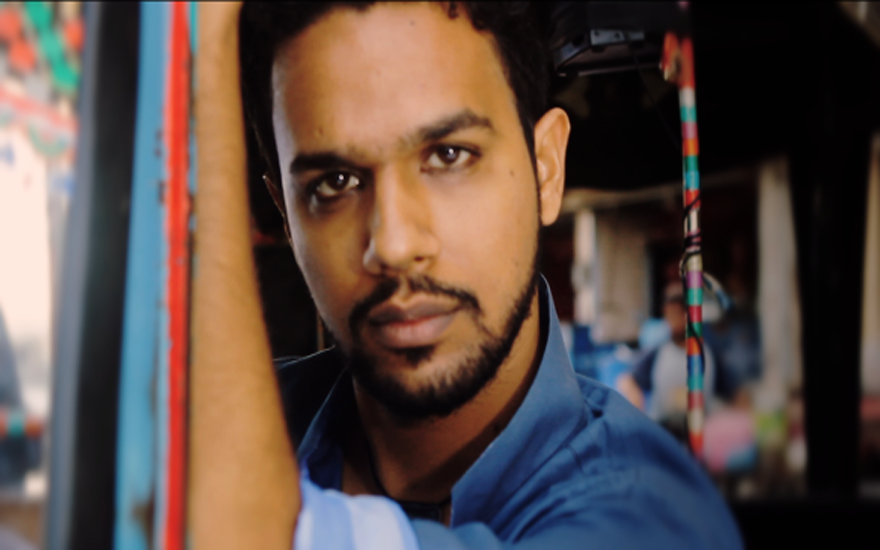 Aside from his Internet videos and live comedy performances, Ali has other big plans as well. Recently, he has started giving free improv and acting classes in the Fatima Jinnah School to young students. For Ali, it is important to promote the arts among children. “There’s so much ethnic hatred and negativity instilled in children, particularly those belonging to a less unfortunate background,” he says. “I was surprised by the extent of it. These young kids, they’re saying things like, ‘Don’t sit with him, he’s a Baloch,’ or ‘Don’t talk to him, he’s amuhajir.’ They need to be distracted away from this negativity. They should be made to do constructive, positive things, and I think art can really help with that.” Ali wants to open a department in the school, where he would like big actors, designers or musicians to teach children for free. He tells me about the enthusiasm and talent of the children he teaches. “They came to me with a script and told me they wanted to make a short film,” he explains.  “We’ve already shot it and edited it. We’re going to release it on the Internet soon. I would like some TV channel to air it as well. Young talent should be encouraged.”

When I ask about his views on the state of comedy in our society, Ali argues that Pakistan needs more smart comedy. “It’s easy enough to produce mindless comedy to earn cheap laughs. But comedy with a message, being funny with some thinking behind it, is more important.” He mentions Moin Akhter, his personal comedic hero. “He always did intellectual comedy, which is much more sophisticated and harder to accomplish.” Among the young comedians emerging today, he specifically likes the work of the team behind the Banana News Network, a TV show aired on Geo.

Despite being a comedian who has performed in both English and Urdu, Ali prefers to produce his work in Urdu, because it allows his work to reach a wider audience. “If you do produce something extraordinary in English, it will reach only a small fraction of our society, but doing something in Urdu will get it to reach millions of people,” he explains. “It’s the masses that we need to entertain. They need entertainment more than the small English-speaking group in Pakistan.” He recalls one of his proudest moments. “I saw a rickshaw the other day, with a sticker on the back which said ‘Saeen tou saeen, saeen ka rickshaw bhi saeen.’ It was then that I knew that my song had reached the people it was supposed to reach.”

This profile was originally published in Newsline’s Annual 2013  issue under the headline, “The Self-Made Saeen.”