Of Fathers and Sons

Generally, beginnings are different from endings. Not so with the military rule of General (retd.)…

In a rare show of unity, Benazir Bhutto and Nawaz Sharif, the two former prime…

The Politics of US Aid

A couple of months ago, American Senator Barack Obama’s statement about the necessity of directly…

The Coalition of Expediency

The Muttahida Majlis-i-Amal (MMA) is in a fix. Its supreme council first decided to resign…

The abiding US interest in the Federally Administered Tribal Areas (FATA), which are geographically part…

Return of the Regals

All great things make a comeback. The very traditional peshwaz and churidar pyjama are making…

Can Paradise be Regained?

It is 2004. A FM radio station starts in a hamlet called Mamderhai, located just…

The more things change in Pakistan, the more they remain the same. When the army…

The Road to Recovery

Fourteen-year-old Mansoor hails from Lahore. In 2004, he injured his neighbour in a quarrel. Afraid…

After a 10-year sabbatical, Shamaeel hit the catwalk with an inspired collection that wowed Karachi’s…

Of Fathers and Sons

Sarfraz Manzoor is a Pakistani British journalist, broadcaster and documentary filmmaker. He grew up in…

Sarfraz Manzoor is a Pakistani British journalist, broadcaster and documentary filmmaker. He grew up in the industrial town of Luton and rebelled against his family to follow his dreams and to forge his own career. His inability to find a ‘secure’ job was a source of great concern to his family. Sadly his father did not live to see the publication of Sarfraz’s first article, or the success of his BBC film about his hometown, Luton Actually, or the momentous day when Safraz was invited as the guest of honour to his old school. Sarfraz’s memoir, Greetings from Bury Park: Race, Religion and Rock’n’roll, is a moving portrayal of family life as well as the friendships and influences which shaped his perceptions of himself as a Briton. 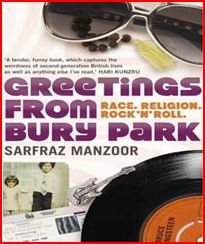 Sarfraz’s father, Mohammed Manzoor, belonged to the Punjab and was a clerk in the KDA before he migrated to Britain in 1963. He moved into a house with 31 others. They worked at a factory and slept in shifts: those on night duty would occupy the beds of those who left to work during the day. He saw his wife and family in Pakistan three times in 11 years. He called them across to Britain in 1974, when Sarfraz was three. Sarfraz’s mother Rasool Bibi Manzoor contributed to the family income by sewing, but it was long, hard, arduous work. To help make ends meet, her children would help out after school hours. Sarfraz fell asleep at night to the throb of sewing machines.

Sarfraz’s father worked in the Vauxhall car factory and borrowed money to buy a house in an all-white area, so that his children would go to a better school. Also, family pressure to succeed was intense: Sarfraz grew up with perceptions of his father as a stern, authoritarian figure, who clung tenaciously to the past — to the customs and culture of distant Pakistan. With hindsight, Sarfraz reflects upon the many sacrifices his father made for the family, which Sarfraz did not quite appreciate as an adolescent. He also provides a sensitive portrait of his older sister, Navela. She had great fashion flair and a gift for designing clothes, but a good marriage was considered more important for her than the university education she desired. Her anger and rage at this and other injustices of gender, led her to break away from her family at the instigation of her Pakistani husband.

Sarfraz goes on to describe how the words of Bruce Springsteen’s song ‘Independence Day’ about fathers and sons helped him understand his troubled relationship with his father. He says, “The realisation that the tension between my father and me was not unique, that it was something as old as time, something that Springsteen had also experienced, was a huge comfort.” Sarfraz was introduced to the lyrics of Springsteen by his Sikh college friend, Amolak. The entire book is permeated with Springsteen’s words echoing through the lives of Sarfraz and Amolak and speaking to them directly in times of difficulty, confusion and stress. There are also lively descriptions of the live Springsteen concerts the two friends attend. Sarfraz’s great day came when, as a television reporter, he was sent off to cover Springsteen’s court case — and actually met his idol, in person.

Sarfraz describes his father’s sudden heart attack and death in 1995, and the responsibility that Sarfraz’s elder brother Sohail had to shoulder to support the family thereafter. Safraz comments upon the ‘luxury’ of being the younger son, which enabled him to lead his own life away from home. A huge gulf developed between Sohail and Sarfraz because Sohail perceived success only in terms of money. He did not appreciate Sarfraz’s achievements as a writer and film-maker. He considered Sarfraz “a layabout” until Sarfraz’s documentary film Luton Actually was aired and brought the family instant respect and recognition in the neighbourhood. Also, while Sarfraz lives in Manchester and seldom returns to Luton, Sohail’s life follows a more traditional pattern. He prospers in Luton, remains a Pakistani at heart and has an arranged marriage with Nazia in Pakistan. Contrary to British stereotypes, Nazia and Sohail have a good marriage and Nazia also befriends both the two family rebels, Sarfraz and his younger sister, Uzma. Through Uzma, Sarfraz depicts a young woman who learns to assert her personality with the dramatic unconventional high street clothes she wears, despite Sohail’s disapproval.

The book also travels back in time to Sarfraz’s early years in Britain. He welds together the descriptions of poverty and hardship with snippets of events involving the National Front and the IRA and anecdotes of racist bullying, childhood games and teenage fashions.

Sarfraz’s quest for identity takes him to a Bollywood-type party in London which makes him realise that he has nothing in common with other South Asian guests there. In marked contrast, he finds a great rapport with crowds of Springsteen fans of all nationalities. After one such concert in 2006, he reflects that both he and Amolak are ‘outsiders’ from the British world and the Asian world, but they have each others friendship and Bruce. For him it was a particularly moving moment to hear the Pakistani qawwal Rahat Ali Khan perfom with Springsteen in ‘Worlds Apart’.

As the book unfolds, Sarfraz reveals his fascination for America which is informed by his love for pop-music, the novels of Mark Twain and films such as Dead Poets Society, Field of Dreams, Rambo and Crocodile Dundee, among others. He describes how his reluctant father generously bought him a guitar as a child and later provided the transatlantic fare to enable Sarfraz to accept a student job offer selling encyclopaedias in California. Later, despite a degree in economics, Sarfraz learns that good jobs are hard to find. He has to support himself with mind-numbing menial work. His major breakthrough is his acceptance in a highly competitive master’s degree programme in documentary film production.

The book also explores the social and religious mores imposed on him as a Muslim in Britain and leads up to 9/11, which so drastically affected attitudes towards Muslims. For Sarfraz, the London bombings of 7/7 were particularly shocking because the suicide bombers belonged to his hometown, Luton, and they blew up the trains and stations that he frequented. He could not accept “the hate-filled people” who defended the bombers or indulged in wild conspiracy theories. He also realised that whereas his father had always considered Pakistan his home and Britain as the place where he lived, Sarfraz has been given every opportunity and has fulfilled every dream in Britain — and that is the country to which he belongs.