How did you enter this field? From an early age, I realised that I had…

Movie Review: Margarita with a Straw

Shonali Bose gets right what could have gone horribly wrong. In Margarita with a Straw, the…

I am a sucker for a good love story. There is something thoroughly satisfying in…

Medicine for the Soul

The new arrival at Fountain House (the half-way house in Lahore) was nine-year-old Sami. He…

Instruments had miraculously appeared in the laboratories and dissection hall, every fan and air conditioner…

If you talk to the superintendent of the women’s prison at Karachi Central Jail (KCJ),…

Having struggled with constitutions, governments and the structure of the state, Pakistan throughout its history…

Tumultuous, seething, driven... artist Asim Butt’s oeuvre seems to have mirrored the workings of his…

There is plenty of work available on civil-military relations in Pakistan. The bulk of literature…

The Genesis of ‘Peoples’ Power’

In the last decade or so, an interesting transformation has taken place in the public’s…

With an unusually convincing line-up of actors, a catchy soundtrack (except for the perplexing lyrics…

Till Need Do Us Part

So, are the days of revolutions and revolutionaries finally over? Has the tsunami receded or…

With an unusually convincing line-up of actors, a catchy soundtrack (except for the perplexing lyrics to Mehwish Hayat’s dance number, Billi), interesting camera angles, a quick pace that doesn’t let the two-hour runtime drag, good direction, and tickets sold out even for the 10 am show on Eid day, Nabeel Qureshi’s directorial debut, Na Maloom Afraad, is a total winner.

A straightforward story, the film is about an unlikely trio — two hot-blooded young men (Fahad Mustafa and Mohsin Abbas Haider) and a stuttering, middle-aged simpleton (Javed Sheikh) — united by dire financial straits that has all three at their wits end. They decide to solve the problem by engineering a strike, setting on fire the bank where they have lockers and claiming insurance on the damages to become rich beyond their wildest dreams, knowing that they will never be caught and that three na maloom afraad (unidentifiable individuals) will be held responsible for the chaos. In their way is fate, but also the cigar-smoking, gold-jewellery adorned, slightly psychotic, mafia kingpin — Gogi bhai — played by Salman Shahid (a role he seems to have perfected to a tee, and similar in many ways to the one he took on in the recently released Pakistani film, Tamanna).

There is something satisfying about watching a film that is shot in your own backyard: The green and white minaret atop Abdullah Shah Ghazi’s mazaar, the towering Ocean Mall and the busy city centre of Saddar, are all easily identifiable in the film.

This quality extends to the humour, too. Although at times slapstick and crude, the jokes are instantly relatable (based on local happenings in Pakistan), giving viewers the sense that they’ve been let it on a private joke. A great example is Mansoor (Haider)’s advice to the bank teller, Hina (Kubra Khan), that she should host her own morning show (after she gives one of her too-preachy monologues about how we should not judge criminals because poverty often forces people to compromise their morals). It is an amusing jibe at the countless morning shows that have blossomed on local television channels in recent years, with no end in sight. 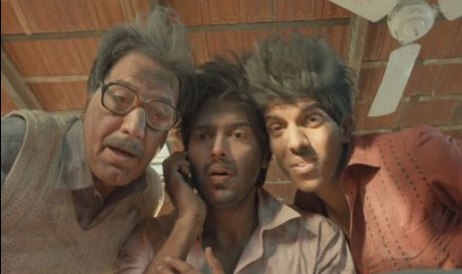 Currently a host of one such extremely popular television programme, and a host of his own morning show in the past, Fahad Mustafa and his far less experienced co-star, Mohsin Abbas Haider, match the much more experienced Javed Sheikh, line for line. Watching Mustafa and Haider, as Farhan and Mansoor, berate Sheikh’s character, Shakeel bhai, over and over again, one could never guess that they are the fledgling newcomers and he, the skilled veteran.

The special effects too are a credit to the makers, and the realistic fire scenes help the film come to life. The strikes in the film wonderfully depict the sense of chaos, danger and uncertainty rife in Pakistan today, with lawless protestors going about shattering windscreens and setting tyres ablaze.

What the film lacks, however, is something that elevates it from the ranks of a surprisingly, well-made film to one that is truly unforgettable, something that gives it an edge over others. In the words of John Mayer, “something’s missing, and I don’t know what it is.” Though I could hazard a guess: a more intelligent script and a more intriguing plot might have given this film that oomph factor. A thought-provoking plot that didn’t hand the entire story to viewers on a platter, but made them work just a little bit to understand what was going on, would have increased its appeal, but perhaps not for everyone. Some viewers might also be left with a slightly bitter after-taste because of the film’s highly questionable resolution: While there may be ample truth to the idea that good and evil are subjective, the film essentially suggests that there is nothing wrong with using the excuse of circumstance to justify one’s crimes, because it is not the individual but difficult circumstances that force people to commit theft.

But in spite of these drawbacks, Nabeel Qureshi has given us a film that is, quite easily, leaps and bounds ahead of other films of the same genre that have been produced in Pakistan in recent years.

This review was originally published in Newsline’s November 2014 issue under the headline, “Almost Spot On.”