The Price of Peace

The PPP-led coalition government’s peace initiative, or should we call it continuation of the old…

Are We Losing the War Against Militancy?

For almost two days, Jandola — a dusty small town on the main road into…

This War is Our War

Sex and the Race

“Iron my shirt!” Early on in the US primary season, hecklers at a Hillary Clinton…

Yasin Malik provokes such a divvied response among people, his name may as well be…

Jack of All Trades

The Return of Indy

Considering the fact that Indiana Jones and the Kingdom of the Crystal Skull is, after…

Who will Tame Cricket’s Shrews?

“All people seem to be divided into ‘ordinary’ and ‘extraordinary.’ The ordinary people must lead…

Amartya Sen is famous because he won the Nobel Prize in economics in 1998. Even…

Back With a Bang

With a line-up boasting local artists and performers, two bands from across the border and…

The Case Against Cluster Bombs

Imagine, for a moment, that you’re in Afghanistan. You’ve just stepped out, your three kids…

They came, they saw, they celebrated. A 14-member delegation of leading Pakistani businessmen did all…

Amartya Sen is famous because he won the Nobel Prize in economics in 1998. Even if he had not been a Nobel Laureate his distinguished academic career as the Master of Trinity College, Cambridge and the Lamont Professor at Harvard University would have commanded respect. That is the major reason why one reads this book on identity and its connection with violence-both not being Sen’s academic specialities-with interest. 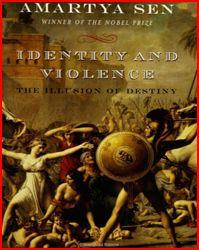 Sen ends the book on a deeply moving personal note. At the age of 11, he encountered his first murder. This happened during the Hindu-Muslim riots when Hindus and Muslims were killing each other without so much as knowing each other’s names in many cities of north India. In one such riot in Dhaka, a Muslim labourer, Kader Mia, was knifed by Hindus. He stumbled into Sen’s house where help was provided by the Hindu family but he died. This memory haunts Sen even after 60 years and he tries to answer a critical question: Why should identity labels evoke so much hatred? Why should they result in murder and rape?

The answer is given in nine chapters but, basically, it boils down to one notion. Sen argues that we all have many identities. We have kinship identities (mother, father, son, wife etc); work-related identities (clerk, executive, accountant etc); socio-economic class identity (working class, feudal upper class, professional upper-middle class etc); religious identity (Hindu, Muslim, Roman Catholic etc); sectarian (religious) identity (Shia, Sunni, Mahayana Buddhist, Jehovah’s Witness etc; ethnic (Sindhi, Baloch, Tamil etc) and nationalistic identity (Pakistani, Indian, British, Russian etc). These identities exist together in one person but the politicisation of identity occurs when one identity is privileged and made to eclipse and exclude all other identities. In the modern world, as Sen puts it:

“[a] major source of potential conflict in the contemporary world is the presumption that people can be uniquely categorised based on religion or culture” (Preface).

This theme was developed in the six lectures Sen delivered at Boston University between November 2001 and April 2002. In these lectures, and later in the book, the author touches upon the violence which these ‘singular’ identifications’ — as he calls them — brings about in our post-9/11 world.

Much of the book is preoccupied with the Muslim identity, and rightly so, because much of the attention — most of it negative — is directed towards the perception and understanding of this identity in the world. He begins by arguing that Muslims, like other people, also have multiple identities. Moreover, much that is valuable in the Western civilisation is a legacy of Muslim as well of other, such as the ancient Hindu, civilisations. In other words, watertight compartments between civilisations are historically unsustainable. And, of course, people themselves are blends of several civilisations so that it is not correct to assume that there is such a thing as a uniform, homogenous, monolithic Muslim civilisation.

He then goes on to argue that when such reified categories are imagined and projected, they tend to hide the plurality of identities and, hence, create rigid notions of identity which reinforce the kind of thinking which persuades the world (a la Huntington) that civilisations are necessarily on a collision course. This is unfortunate because if the religious identity eclipses all other classifications, as it threatens to do now, the next global wars will be waged in terms of religious identities.

By imagining a religious identity in narrow terms we crowd out many varying notions of religion. This relates to the point made by Sen concerning the hope of Judea Pearl — the father of Daniel Pearl who was murdered by Islamic militants in Pakistan — that the militants would be branded at a conference of inter-cultural understanding attended, among others, by 170 Islamic clerics. However, the communiquÃ© of July 6, 2005 did not declare the militants apostates or non-Muslims, though the clerics did condemn violence. Contrary to what one would accept from a liberal humanist, Sen says that since Muslims have taken different positions about ‘confrontation and tolerance, on which Islam does not dictate’ (p. 81), it is not possible to categorise Muslims in this fashion. This insight from a highly erudite scholar might be of some use for the decision-makers in Pakistan who refer to the suicide bombers of Pakistan as ‘non-Muslims’ thus covering up from our own people the policy failings which have produced such militancy.

Amartya Sen also connects identity with globalisation. He argues that the inequalities produced by the economic repercussions of the process lead to singular identities being blown up till all other ones are lost. Peoples’ sense of being cheated and their anger create much of the energy which feeds conflicts in the world.

Identity and Violence is a significant book and one which should be part of every educated person’s reading. It is written in a very easy, readable style and is remarkably lucid, clear and yet human. References are kept to a bare minimum. Unfortunately, this means that other people who have expressed similar ideas about identity, and there are several of them, are not referred to or quoted. In fact, one could argue that the ideas in the book, especially those concerning the fact that human beings have multiple identities, are not original.

Some people could interpret this lack of originality as a defect in the book. In my view, people of the intellectual eminence of Amartya Sen can transcend the normal scholarly conventions which create the conventional scholarly work. The works of such eminent scholars are valuable for the insights, clarity of vision and the moral sense they bring to their understanding of certain themes of contemporary relevance. Sen’s book is valuable for this kind of intellectual acumen and moral anguish. But this does not mean that he has given the perfect cure for the world’s ills. There is, of course, no cure or solution to the singularity of identity which creates such mayhem. And, when Amartya Sen proposes that we should at least aspire for ‘a democratic global state,’ one tends to agree. However, having seen that the powerful agents hijack all ideas and turn them into instruments of their own domination, one’s heart sinks. One can only hope that a voice as powerful as that of Amartya Sen’s will impress upon more people that if humanity is to have a future at all, it is necessary to encourage some genuine tolerance of a person’s multiple identities.