He was cool and relaxed in a baby blue shirt, deep blue tie and navy…

You can shout from the rooftops. You can demonstrate on the streets. You can express…

The morning of October 8, 2005, will forever be remembered as the morning that brought…

It’s Not Easy Being Molly

When Putsch Comes to Shove

“As in the Philippines and Burma,” Simon Tisdall commented in The Guardian late last month,…

For Mohsin Hamid, a management consultant-turned-novelist, the average workday has definitely changed pace. These days…

When Judy Chicago’s ‘Dinner Party’ was exhibited in 1979, the idea of collaboration in art…

Potter of the Spirit

There is no brief way to describe Mazhar ul Islam’s stories. They are poetic, yearnful,…

When Judy Chicago’s ‘Dinner Party’ was exhibited in 1979, the idea of collaboration in art was associated solely with the feminist project. The inclusion of seamstresses and craftspeople in her production team was intended to elevate the every-day work of women to the status of high art, then considered the domain of the male artist-genius. As the means for destabilising hegemonies, artistic collaboration continues to offer great potential, as recently demonstrated by ‘W11 — Karachi to Melbourne.’

Coordinated by Durriya Kazi and Mick Douglas for the Commonwealth Games 2006, the project was aimed at dismantling stereotypes of “Islamic terrorism” sustained by the international media. To this end, Wajid Ali, a recent graduate of Karachi University’s Department of Visual Studies, led Nusrat Iqbal and his group of “chamak-patti wallahs” to decorate an Australian tram in W11 fashion. Photographs and films documenting the project were put on display at the V.M. Gallery, September 7 — 22, 2006.

The tubular corridor of the V.M. Gallery was chosen to simulate the experience of the heavily adorned interior of the tram, which offered free rides during the cultural festival coinciding with the Commonwealth Games. Images of mini-bus decoration and of people interacting with the interior of the tram space were mounted on tin sheets and framed by strips of “chamak-patti,” to create a semblance of the ride. Down the end of the gallery corridor, a set of films capturing the Australian experience of the ride were played on a loop, while Wajid Ali’s own documentary was screened next door. 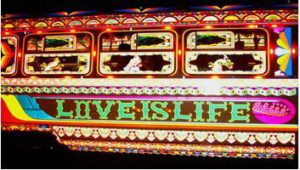 Conceptually, the idea of public transport providing cross-cultural interaction is fairly foreign to a Pakistani audience, where neither is a bus ride conceived as a pleasurable experience and nor is it the favoured mode of commute for people who can afford otherwise. Yet in the Australian context, especially given the backdrop of a cultural festival and the Commonwealth Games, it appears to have engaged the audience most effectively. The colours and music, considered kitschy and garish in Pakistan, were able to strike a chord with the Australian passengers on a personal, aesthetic and a political plane. Also interesting in the videos was the way the tram allowed for the South Asian diaspora to identify with their own cultural reality without apology or explanation. The atmosphere of fun and revelry in a narrow but cheerful space, blaring Urdu and Punjabi music, allowed for different ethnicities in Melbourne to intermingle, as Mick Douglas said had been hoped.

Although every step of the project was collectively orchestrated, the limelight of the show at the V.M. Gallery was on Wajid Ali, whose exhaustive documentation brought the Australian experience back to Pakistan. From a documentary perspective, the photographs assume an emotionally distanced vantage, methodically magnifying the individual motifs, which would have ordinarily been overlooked once enmeshed among a myriad others on the side of a bus or tram. In contrast, Wajid Ali’s film takes a more personalised look into the process of decorating the tram, W11. The audience is led from the inception of the project in the Allahwali neighbourhood of New Karachi, through the meticulous making of patterns with ballpoint pens and Exactoknives, to its culmination in Melbourne. It invites an appreciation of the degree of discipline involved in a truly labour-intensive enterprise. 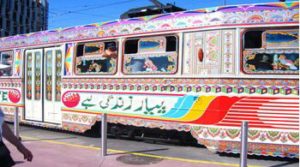 What is particularly appealing is the way the thought process behind the decoration of a vehicle has been captured. The vehicle is perceived as an extension of its owner and thus its decoration is a necessary part of his self-image. In conversation, the vehicle is personified, sometimes as a bride and other times as a “chamak-challo” who, as she sets off on her daily route, becomes the envy of all other vehicles. Feminisation of property and ownership being manifested through adornment, are reflective of the gender paradigm ostensible in this segment of Pakistani society. It makes one wonder if the attention attracted by the vehicle would be accepted with such pride, if it were in fact, not the vehicle but the woman of the house. The incorporation of such subtleties and nuances of cultural production, and that too, without judgement, is perhaps the strongest feature of Wajid Ali’s documentary.

The V.M. Gallery was the second venue for the film’s screening, the first being Allahwalli, New Karachi. In comparison, the exhibition at the gallery may have decontextualised the work to an extent, but provided the necessary medium to take the work to a different demographic of Karachi’s urban population. On many levels, the Pakistani social structure is a Marxist’s nightmare, but projects like W11 — Karachi to Melbourne may well be the torch bearers for fostering greater respect between socio-economic classes on a national level, while we struggle to improve our international image.