Justice at last? How the Law was Upheld and Scorned 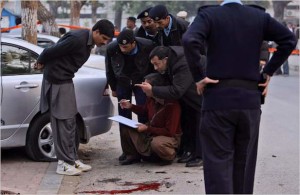 The much publicised and disturbing case of Salmaan Taseer’s assassination continued to evolve on October 2, 2011, when cold-blooded murderer Mumtaz Qadri was sentenced to death by Judge Pervez Ali Shah of the Anti Terrorism Court in Adiyala Jail, Rawalpindi. Qadri had confessed in court to having murdered Governor Taseer because of what the killer deemed to be blasphemous statements by the outspoken politician and businessman. Taseer was assassinated on January 4, 2011, at Kohsar Market in Islamabad, and his murder case was registered at the Kohsar Market Police Station by his son Shehreyar Taseer. The legal process in this case has been anything but swift, as it took 10 months for the death sentence to be handed down on Qadri, an armed guard in Taseer’s security detail who shot Taseer in front of many witnesses and who has never once denied killing the man he was supposed to protect.

But a verdict that should be hailed as a victory against this country’s widespread fundamentalist anathema is being branded as something of a national tragedy by many across Pakistan with intolerant and unforgiving religious beliefs. This has given rise to growing disillusionment and disorientation within the progressive few and intensive rioting and protests amongst the indoctrinated many.

Perhaps most jarring is the reaction of the upholders of our law to this volatile situation. Pictured harassing Judge Pervez Ali Shah’s courtroom in an expression for their disdain over his objective decision-making, thousands of Pakistani lawyers reacted with fury, fuelled by sentiments void of logic and completely detached from the law. In a confusing frenzy in which Qadri was labelled ‘Ashiq-e-Rasool‘ (one who loves the messenger of God) and Taseer’s murder was justified on the grounds of his ‘un-Islamic’ character and lifestyle, it is impossible not to be shocked by the attitude custodians of our justice system have adopted. Be it the oath they swore when they joined the Bar, or the thousand of tenets they memorised in law school that value justice, due process and the right to life, lawyers’ hypocritical stance stands in stark contrast to the grounded and principled barristers in Pakistan’s history, including the founder of our nation, Mohammad Ali Jinnah.

Furthermore, how can we expect our masses, and more specifically our youth, to respect the law, embody the constitution and uphold the sanctity of life when our very own lawyers, who are the so-called ‘arbitrators of justice‘, so easily dismiss it. It is indeed distressing to know that the plague of extremism has spread to those facets in our state that vowed to defend us from it.

If this was not disconcerting enough, Judge Pervez Ali Shah has been transferred to the Child Protection Court Bureau in Lahore from the Anti Terrorism Court in Rawalpindi after ongoing harassment from not only the religious extremists but also his own colleagues in the legal fraternity. With brave men such as Salmaan Taseer forever silenced and judges such as Pervez Ali Shah being removed from the legal forefront, one shudders to think what the future holds.