Curbing the Dengue Epidemic: What the Government Should Do 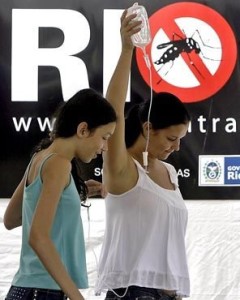 Two things are vital during an epidemic. First, people should be aware of the disease and be able to utilise healthcare resources when needed. Second, unnecessary panic must be avoided so as not to overwhelm these same resources. The media, where it can help to educate the masses, can sometimes be counterproductive by creating excessive hysteria. Rather than exaggerate the dangers of an outbreak of disease, the media should emphasise essential public health measures to help curb the menace.

The Pakistani media and the Punjab government both appear to be in a state of panic, which is contagious. The government has called in experts from Sri Lanka to help deal with the multiplying cases of dengue fever. The whole nation is grateful for this gesture of generosity by our friendly neighbour. As a medical scientist, however, I wonder what special expertise they possess that Pakistani doctors lack. There is no vaccine for dengue, no medical cure for the virus, the disease is self-limiting in the vast majority and requires timely administration of intravenous hydration, as well as blood and platelet transfusions for those who have contracted the haemorrhagic form. In case of shock, ICU care is critical. I am confident we have the ability and competence to provide such care.

Instead of looking abroad for answers and being hostage to the media frenzy, the health ministry should be looking to establish effective models to help in the early detection, treatment and serial follow-up of patients with dengue fever. Medical literature describes several such models. When a dengue epidemic broke out in Rio de Janeiro in 2008, for instance, the Albert Einstein Hospital in SÃ£o Paulo, Brazil, sent a multidisciplinary team of volunteers with supplies to set up “hydration tents” across the city.

A hydration tent covered an area no more than an average family house, included a waiting room with 20 seats, a medical office with two tables and one stretcher, a small room for blood count tests and a room for intravenous fluid replacement with 30 armchairs. The tent was open and operational around the clock. It was equipped with supplies for blood draws, intravenous solutions and an automated blood cell analyser that released results within a minute. It also had basic symptomatic medication for fever and vomiting. Each team, working in 12-hour shifts, consisted of four doctors (two internists and two paediatricians), three nurses, six nursing assistants, two administrative clerks and one lab technician.

Primary care units, as well as city and state hospitals would refer patients to the tent. The routine procedure consisted of an initial screening, including vital signs (temperature, blood pressure, etc.) tourniquet test and blood sampling for a complete blood count (CBC). Once screened, the patients were seen by a doctor and evaluated clinically through a detailed history and examination. If clinical and laboratory data suggested dengue fever, the patient was assigned to one of three groups:  ORT (oral rehydration therapy), IVT (intravenous rehydration therapy) and DWR (discharge with recommendations).

ORT consisted of supervised fluid intake; either at water fountains installed in the tent or by volunteers who constantly offered the patients filtered water. In addition, the patients received instructions about fluid ingestion at home.

Patients were reassessed after rehydration (ORT or IVT) with a new CBC. Patients showing improvement were discharged and instructed to return if they experienced symptoms of disease progression. They also received an ID card (to present on revisits) with data on their blood work and vital signs. In case there was no improvement, patients received another course of IVT. If they continued to be refractory or worsened, they were transferred to a tertiary care hospital immediately.

Studies show that the early detection of dengue, followed by intravenous fluid administration in patients with complicated dengue fever or dengue haemorrhagic fever (DHF), has a major impact on its overall prognosis. Also, the balance between the demand for a healthcare utility and its availability during an epidemic is invariably tilted in favour of the former. In a country like Pakistan where this equation is tilted at baseline, a further dip can induce widespread chaos.

Effective models, such as hydration tents, can prove vital in dengue epidemics. They can help shorten the waiting lines at hospital ERs, broaden access to health care, improve the shortage of hospital beds and allow early detection and treatment of severe cases. Implementing hydration tents as an emergency measure should therefore be a priority in the Punjab. This will help decrease deaths and improve health care access in the most simple and cost-effective way.  If materialised, I am confident this measure will prove to be a key factor in taming the current epidemic.