Zubeida Mustafa is a pioneering and award winning Pakistani journalist who became the first woman to work as assistant editor when she joined the Dawn staff in 1975. She developed specialized pages on the social sector in Dawn, such as Health, Education, Women and Books–the latter was expanded into Pakistan’s first and only literary supplement, Books and Authors. She edited Dawn’s One World Supplement and has travelled to, and written about countries ranging from Canada, Sweden and West Germany to Egypt, Ethiopia and South Africa. Twice, her articles won awards from The Population Council of New York.

In 2012 Mustafa received the Lifetime Award Achievement from the International Women’s Media Foundation and The Dawn group set up an award for women journalists in her name, the Zubeida Mustafa Award for Journalistic Excellence.

Mustafa’s acclaimed autobiography My DAWN Years: Exploring Social Issues provides rare insights into changes she witnessed in the press in Pakistan over three decades. She welds in personal issues too with great courage. In 2009 she retired from Dawn, due to her diminishing eyesight, though with remarkable courage she continues to write and contributes thought provoking columns for Dawn and is also the author of several books including The Tyranny of Language in Education. 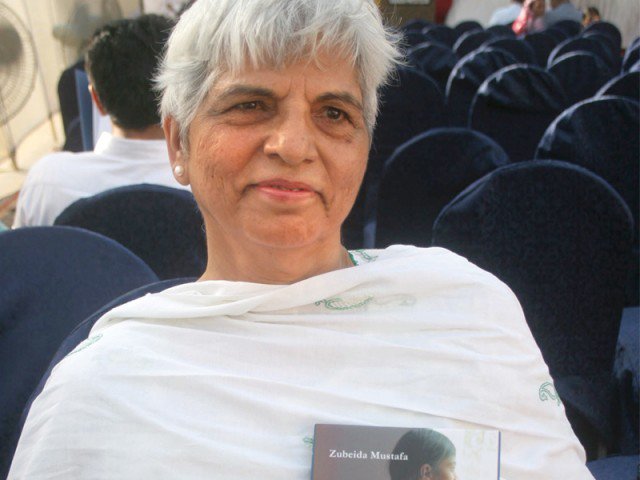 Before you joined Dawn, you worked at the Pakistan Institute of International Affairs. Did you grow up in Karachi

I was born before Partition but in 1947 my father, a railway officer opted for Pakistan  and we came to Lahore via Delhi. I was told by my mother that that was the last train which was not attacked. After that you get all those trains full of bodies, which Bapsi Sidhwa has described so well [in her novels]. So we were in Lahore and then my father was posted to East Pakistan. Before he retired, his last posting was Karachi. Most of my education was here at St Joseph’s Convent, Saint Joseph’s College then Karachi University.

At that time very few young women took up a career and continued working after marriage. Did you face any opposition?

I think I was very fortunate in that way. My parents were very enlightened. My father could be posted anywhere but my mother would stay back with us sisters while we were at school and we wouldn’t join him until our school year and exams had ended. So we never lost a year because of these constant transfers.

In early days of Pakistan women could either became doctors or teachers. I think those were the only two avenues open to them. I was inclined towards writing and it was basically because of a teacher of mine who was really appreciative of my essays and homework. She gave me the idea that I would like to do a job which involved writing.

After my Masters, I got a research job at the Pakistan Institute of International Affairs (PIIA). There was no opposition to my working there, because the people were known and it was a small place, very respectable. My job was mainly research on international affairs and I had to write papers for their journal. I learnt so many things over there — how to edit, how to proof read and how to research something— in journalism they call it investigative journalism– but I was trained that way and it became a habit. Anything that I was told, I wanted to verify.

After seven years at the PIIA, I went to the London School of Economics, but I didn’t complete my studies because I was married by then and I had left my daughter behind with my in-laws in East Pakistan. The situation in the country was very bad in 1970-71 and I was worried about her.

What led you to journalism?

Actually it was just an accident. After LSE I didn’t take up a job, because I wanted to be with my daughter and I had a second one too. I had planned to take up a job when the girls started going to school, it was then that Ahmad Ali Khan Sahib sent for me. I didn’t know he was going to offer me a job, I just thought he wanted me to write something.   He asked me to join. He made it so attractive with flexible timings that I accepted. I would go in every day but I didn’t stay for long hours, because I wanted to be with my children. If I was writing an editorial I would do it from home and he was happy that the work was being done.

Very frankly when I joined it was after a gap of six years and I wanted to see if I could adjust. I thought I would work for 3 months then decide but 3 months went on and became 33 years.

What impediments did you face as the only woman journalist on the staff?

I didn’t really have any impediments as such. When I joined Dawn, I was aware there were no other women around and I somehow had to find my way through. I did have two things at the back of my mind: one that I should not really alienate my colleagues because it would be so easy for them to kick me out and secondly I tried to do my work well. But mainly it was the support of my editor Ahmad Ali Khan Sahib. He was a very progressive man and a champion of women’s rights.

How did journalism change you?

When I became a journalist I was quite reserved and I was not comfortable with strangers. In Dawn I learnt to interact with people because I had to. In journalism you are exposed to people of all kinds and different opinions. We look for information. And where do you get it? -From people; and then through books, papers and so on. But the quickest source is people, if they answer very honestly what you are asking for and it is more authentic as they have a wide area of knowledge — for that information you need a whole book.

Then, as a journalist, I started thinking more about things, to find out what was happening. That is why I didn’t mind talking to strangers. There was this flexibility because if you are in such different situations all the time, you learn to adapt. In terms of feminism, I learnt there are many men who support women’s rights and they are always willing to help.

Another difference was that I learnt team work. Frankly in Pakistan it is not always there. So many people just want to be individuals: they want to be leaders.  I never thought of myself as a leader but as a team member – of course I had to make decisions but I encouraged the team I was with to share ideas with each other. I learnt it all from Khan Sahib because he was the leader of that big team in Dawn.

Did you write political and social editorials?

When I joined, the press was very controlled and you could hardly write about Pakistan. I was writing on international affairs– about Zambia, Japan, and the de-colonization of Africa. I wrote many editorials on South Africa and apartheid. But then the editor asked me “Why don’t you write about the social issues?” I think the men were not interested.

Writing on things like education — they would write “There are not enough schools” but I would actually investigate more. The men probably didn’t think it was important enough. In fact they called such editorials as “vegetarianism”. The “meat” was politics or the economy. I was writing on politics also – I wrote a lot on Afghanistan when the war started there in 1977, but I was also developing my pages on education, population, women, health though everything takes place against the backdrop of politics. I was very aware of that.

You brought out these pages on social issues and then the Books and Authors Supplement and the One World Supplement. Which did you enjoy most?

‘Books and Authors’ was my favourite. 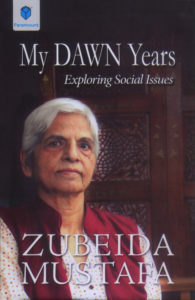 In your book My DAWN Years, you have detailed the great changes you have seen in journalism since you joined.Can you give us some pointers?

Journalism was changing even then when I joined. In a way you can give direction to the change depending on the role you are playing and where.

The difference between the changes taking place then and the changes taking place now is that in those days journalism in Pakistan was all very controlled. There were very few papers, only one TV channel, which was controlled by the government and many of the newspapers had been taken over by the government and belonged to The National Press Trust, set up by Ayub Khan, The independent papers were also subject to pre-censorship — I have written how each and every page had to be sent to the Press Information Department.

Today, I wouldn’t say there isn’t any control, but the method has changed. Previously they would react, approach the editor or the proprietor or close down the whole newspaper, but now you don’t hear that, but the control is still there — an invisible control– maybe if they are too angry they will just shoot the journalist.

The other change is technology. It affected journalism because it is faster, in some ways easier. Disinformation was the name of information we had to guard against. When the internet started, there was a course that I specially went to, so that I could understand more about it. The first question that I asked was, “How do we know that this is the correct information.”  I was told, “Look at the source. Can you trust it?”

The other thing that has happened is that television has taken over. A lot of people don’t pay so much attention to the print media though it has still kept its characteristics and has more depth and explanations. In the electronic media people just say what they want to and it has a much wider viewership. All these channels are competing with each other and have become so commercialized that all the values that we were taught are getting lost. The role of the media has become a very negative one, because of the changes that have come about. I mean the change is there, but how do you use those changes? Unfortunately we have not used them to the best.