Dr Samia Mehrez is a distinguished Egyptian literary critic and an expert on Naguib Mahfouz, Sonallah Ibrahim and Gamal al-Ghitani. Her most recent work is Egypt’s Culture Wars and an English translation of Egyptian activist and blogger Mona Prince’s memoir, Revolution Is My Name, on the anti-Mubarak uprising in Tahrir Square in January 2011. Dr Mehrez also has two volumes of the Literary Atlas of Cairo to her credit which are meant to be literary maps of the city.

In this interview, Dr Mehrez, who was invited as a delegate to the Lahore Literary Festival (LLF), speaks to Newsline about literature, politics and the uprising in Egypt.

What brought you to Pakistan?

The Lahore Literary Festival brought me to Pakistan. I was delighted to be invited as I had always dreamt about coming here. Some of my dearest school friends are from Pakistan. There’s a diplomatic connection, because we studied at the International School in Cairo and have been in touch, but we are meeting after a long time.

We (in Egypt) have so many affinities with Pakistan, so to be able to come and be introduced to this magnificent culture at the current moment in both countries… I was listening to the opening speeches at the LLF and were there to be a similar event in Egypt, the same issues would be discussed: violence, conservation, losing our cultural space, etc.

So you were here to talk about Naguib Mahfouz?

I was here to speak about Egypt, Cairo and the Arab literary scene, as well as the politics of the novel. Mahfouz was a ‘bouncing boy’ for the purpose. The LLF organisers decided the panel on Mahfouz; I didn’t want to speak about Mahfouz and I thought to myself, ‘Let us move on from Mahfouz now!’

In one panel at LLF, you spoke specifically about Mahfouz’s Cairo Trilogy. Is it really his most important work? Don’t you think his novel, Chitchat on the Nile, is more relevant in Egypt’s current situation? Also, another Egyptian novel recently translated into English, is Tewfiq al-Hakim’s Return of the Spirit, which actually talks about a military takeover and was much loved by Nasser. Why don’t we ever hear of such novels?

The Trilogy may not be Mahfouz’s most important work, but it marks the climax of his career and established him as a novelist. Prior to his career, the novel was looked down upon as a frivolous enterprise. Even if Trilogy is not his most relevant work for Egypt today, it is an important one.

We don’t get to hear about other writers because the flow of cross-cultural conversations is such, that many of these writers have fallen off the global map. That’s why I talk about a South-South dialogue. 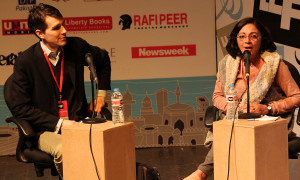 How would you describe the current situation in Egypt?

The situation in Egypt is fluid, but optimistic in the long run. It looks pretty dismal at the moment, darker than the Mubarak era. But on the cultural level, there is no turning back. People can fight. Perhaps the only significant statement from Sisi was: “Egypt is a young woman. We have a population 60 per cent of which is under 25.” Mobilising their energies, they are subverting hierarchies and conventions. These things cannot be taken away from the people anymore.

We have been bombarded with stuff: street art graffiti, theatre, the independent music scene, the visual arts scene, the literary scene and cinema. Young film-makers have been making films over the last five years on limited budgets. There are several films made by women, including Asham by Maggie Morgan. A movement for making films in hard times is growing. There is a drop in people stepping out of their homes, but tremendous digs are being made at the bureaucracy and censorship, and all this is a part of the revolution.

Why is it that some of the country’s best known intellectuals like Nawal El-Saadawi, Khaled Fahmy, Hazem Kandil, Alaa al-Aswany and Sonallah Ibrahim are supporting the new regime in Egypt?

We have to look at the context of the movement and understand that what happened on January 11, 2011 created two major players: the Muslim Brotherhood (MB) and the Egyptian army. No third party has emerged over the past 60 years. To speak about a secular constitution is a fallacy. The uprising put it to the test, and the few figures that emerged e.g. El Baradei were shot down. He was presented as a traitor. Egyptian intellectuals today are willing to give the MB a chance. Al-Aswany was not against the MB. Even a prominent secular activist like Alla al-Fattah voted for Morsi. But the experience of having the MB in power was nightmarish. The only other player in the field is the army.

A former diplomat, Ezzedine Choukri, has recently written a novel titled Bab Al-Khurooj. It speaks about the uprising in Egypt and has predicted every regime ruling in Egypt over the next nine to 10 years. He has tried to show that revolutions are not made in just 18 days. They are like rollercoasters, with ups and downs, but there is always light at the end of the tunnel.

Who are some of the recent Egyptian/Arab writers from the younger generation you would like to recommend to Pakistani readers?

The writer is a social scientist, translator, book critic and a prize-winning dramatic reader based in Lahore.