The PTI’s Karachi jalsa shows that Imran Khan has some serious momentum. Every week, more big-name politicians are joining hands with him in an effort to make his growing party a serious political contender. National polls are still many moons away, but that has not, and likely will not, stop Khan and his PTI from storming forward with aggressive campaigning. But is there substance to Imran Khan’s platform? Or are his positions filled with inconsistencies? Commentator D Asghar believes Imran Khan is like a gifted conjurer whose fans are too enamoured by the spectacle he produces to even consider the smoke and mirrors that share the stage. Read his article below. 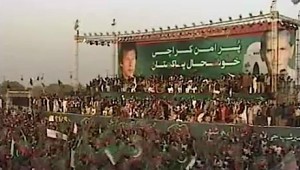 After 15 long years, Imran Khan has finally come out of the commentary box, so to speak. He says he is finally ready for a real political innings. And now, what was otherwise an aging non-entity of a party called PTI has received a few botox shots via the dissidents of other parties.

Imran Khan, the cricket hero and philanthropist, has become the darling of many TV talk shows as a politician with serious heft. Using this platform, he has been criticising the so-called status quo. In his line of fire have been the usual culprits, the PPP and PML-N. Both, according to him and his followers, have plundered the national wealth. To his followers, he is no less than a messiah in disguise who is ready to relieve Pakistan of its biggest menace: corruption. Khan’s PTI is the cleanest, and he can perform magic where all others have failed. In reality, though, his party seems to be the newly laundered version of the old PML-Q.

His sudden rise can be attributed to the successful dharnas (sit-ins) in Peshawar and Karachi. The anti-American Khan is of the view that all the ills of Pakistan are due to the US invasion of neighbouring Afghanistan. His rallies displayed “Say No to Drones” banners, and his fiery speeches criticised the current regime and its allegiance to US policy. It is amazing given that these drones were flying in General Musharraf’s era as well, yet Mr Khan did not resort to any sit-ins or street action at that time. Even after his sit-ins, there were other drone attacks, but apparently sit-ins were more of a passing fad.

Typically long-term strategic foreign policy is carried over from government to government, regardless of who is in the saddle. Imran Khan is fairly familiar with the region and knows that the incumbents are continuing the policy of their predecessor. Besides, being an astute political commentator, he is completely aware that, when it comes to foreign policy, the civilian government has to tread a fine line. And I’m sure it is rather obvious to him and the rest of the country who draws that line.

By inheriting Khurshid Mahmood Kasuri and Shah Mahmood Qureshi, Khan has done an about-face on his anti-American rants. Needless to say, both these men were the once recent foreign ministers and share some blame for the policies that Khan has highlighted and tried to capitalise on.

But like any other member of the opposition, Mr Khan loves to gain political mileage at the expense of the current regime. His mantra of “hope” and “change,” primarily borrowed from Barack Obama’s 2008 presidential campaign, seems to be a big ploy of hot air. His Minar-e-Pakistan rally in Lahore, which was touted as a political tsunami and “game changer,” may be nothing more than a hoax.

What baffles many observers is the political jugglery of immense proportions. It seems as if Khan’s followers believe he is a Superman and will propel Pakistan forward, full throttle, with some application of his supernatural strength and speed. What they badly fail to realise is, that even if Mr Khan becomes the prime minister, it’s not him but the legislators who can ensure that real change occurs. The fact is, no matter what, in order to reach Islamabad, Imran Khan will have to wheel and deal with other political parties.

More recently, he has taken any and everybody into the PTI’s “hall of fame.” He has finally come to terms with the fact that a campaign runs on “electable candidates,” whether those candidates may be feudal landlords or age-old bureaucrats, because in the end, his one-man show cannot garner enough seats to carry him to the finish line.

Khan’s leanings towards the religious right are no hidden secret. Typically that segment does not carry much strength when it comes to real change or action of any worth. It turns out to be a hotchpotch of parties who come under the banner of religion and disintegrate rather quickly. In case he has any doubts about this, all he needs to do is revisit the history of the PNA, IJI and MMA. To bank on their support will be quite a futile exercise, even though his supporters are a cross of the ideologically confused pseudo-liberals and fundamentalists of the right.

As they say, the devil is in the details. At this point in time, those details are still murky. How does he intend to throw away the so-called begging bowl? What magical macro- and micro-economic policies does he intend to introduce that will boost GDP, reduce unemployment, minimise inflation and increase foreign investment? Above all, how will he be able to eradicate the distasteful icing of corruption from this economic cake?

And here is a grim reminder for Khan and his followers: they should be holding their criticism and disdain for some of the other political parties in the current arena. When and if his time comes, he will have to form a coalition with the same old time-tested faces. That’s a ground reality, and ignoring that would be nothing less than stupid. Remember, presumably he is running to be prime minister and not king. It’s going to be more of the same under a different name. Being “Kuptaan” in cricket is easier than playing the real game on the political pitch.