Behind the Scenes Look at the Karachi Jalsa 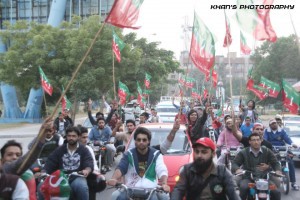 The PTI Karachi jalsa’s turnout was impressive. Although the official count is not yet known, crowds seemed to exceed the number of people at the Lahore jalsa held earlier in October. Attendees at the Karachi jalsa later shared that the event was well organised and that there were no security concerns — a remarkable accomplishment considering Karachi’s reputation for unrest.

However, whether we were there in person or watched from the comfort of our living rooms, few of us have any idea about what it takes to organise a jalsa. Newsline spoke to Arsalan Taj Ghumman, president of the Karachi division of the Insaf Student Federation (ISF), to get a behind-the-scenes glimpse of the jalsa preparations.

On the Thursday before the historic event, Ghumman returned home far past midnight after receiving Imran Khan at the Karachi airport along with hordes of other supporters. But these late hours are not unusual for PTI student volunteers. Ghumman says, “There are many student volunteers who attend classes in the morning, join us at the PTI camps at noon and then at night help with other campaign activities that range from editing promotional videos to distributing stickers. There are days I go to bed at 8am and then wake up three hours later to get back to work.” When I expressed alarm at these long hours, Ghumman laughed it off. “There are volunteers who don’t go home for days.”

The mobilisation campaign for the jalsa was multi-faceted. Apart from the various camps set up across the city to spread awareness about the party and the jalsa itself, the PTI sent formal invitations to approximately 60 politically-neutral organisations such as the Pakistan Youth Senate and the Pakistan Youth Forum. The student volunteers got special permission to campaign inside malls where they distributed pamphlets and stickers. They sold Imran Khan t-shirts at Sunday bazaar. And then there were the phone calls.

Asking Ghumman about the automated Imran Khan phone calls made to unsuspecting Karachi residents in the days leading up to the jalsa, he shared that a similar tactic had been employed in Lahore in October. For the Lahore jalsa, a PTI supporter who worked in telecommunications came up with the idea of automated calls and took the initiative to get more people interested in the Lahore jalsa. Noting the success of this strategy, the PTI decided to make it a part of their campaign once again and more than 300,000 calls were made per day.

Ghumman, emphasising the dedication of the volunteers, shared that they worked around the clock although they were not provided with food or accommodation. While it is encouraging to see young people galvanised and excited about politics, it does make one wonder if their efforts are being appreciated. When Imran Khan was making his speech at Mazar-i-Quaid, Ghumman was briefly caught on camera standing a few feet behind him. But his efforts, along with those of other volunteers, are generally overshadowed by the big names that are at the helm of the party.

I asked Ghumman if he thinks the volunteers’ efforts are appreciated. “It is really encouraging when people come up to us and ask for stickers and posters for their families.” He told me about a chaiwallah who promised free tea for as long as they were campaigning in exchange for an Imran Khan t-shirt. Then there was another incident when he and a few PTI members were at an upscale cafÃ© in Zamzama and a patron, discovering their association with the party, paid their bill for them. “The public is very supportive and has given us a lot of respect,” he adds.

Talking to Ghumman, one becomes aware of a different side to the party than one sees in the headlines. It is often easy to be sceptical of Imran Khan’s idealism or to criticise some of the party’s political stances. But seeing so many young people pin their hopes on the change their chairman promises, one deeply hopes that Imran Khan delivers in the end and that these volunteers’ efforts are not squandered away.