If Raymond Davis Calls Himself a Consultant for the Consulate, Does it Matter?

A week ago, I was at a party in Karachi and a friend told me about a video he saw on a private news channel. It showed Raymond Davis in a Lahore police station being questioned by police. The footage seems to show Davis in a police thana immediately after he was picked up for fatally shooting two men. In the video, Davis is asking for his passport and establishing his identity.

My friend didn’t tell me about those details. He was fixated on other elements, like the goofy behaviour of the police officers and their heavy Punjabi accents: at one point one jokingly says, “No money, no water” when Davis requests bottled water, and just seconds earlier, when the officers seem to be having trouble transliterating the American’s surname, one officer can be heard saying “‘Diamond’ kar lo” (just put ‘Diamond’).

The footage is not of the highest quality, ostensibly captured by a mobile phone. The phone seems to placed on a desk or table in front of Davis with police officers along at least two sides of the table, to the left of Davis and across from him. The camera points up and captures only part of Davis (head, neck, arms, hands) mostly in silhouette and apparently standing up (he later asks if he can sit). While standing, he asks for his passport, shows his identification cards, and requests bottled water.

But the video also reveals some more important pieces of information – and most are straight from Davis’s mouth. Not surprisingly, this video was leaked to the press, in this case Dunya TV.

In one exchange (transcribed below), Davis describes himself as a “consultant.” And, in the preceding moments, even though it is not entirely clear because of the picture quality and angle of the camera, while showing (flipping from one to another) the official badges around his neck to the police officers interrogating him, it seems like Davis explains his two pieces of US government identification the following way, and in the following order, (go to 0:54 mark of the video): “This is an old badge, Islamabad. This is Lahore.”

The police officer asks, “You are now working in consul general?”

Davis: “Uh, I just work as a consultant there.

Davis: “Yeah, with the RAO.” The Guardian reports that the RAO is “an apparent reference to the US regional affairs office.”

Does this video mean that Davis himself has admitted on camera to the police that he is a member of US consular staff in Lahore, and not diplomatic staff? Not exactly, because at one point early in the video, Davis is asked if he “belongs to the American embassy,” and he replies, “Yes.”

Also the Guardian reports this:

US officials declined to comment on the clip, but insisted that Davis’s specific assignments at any given time did not detract from the fact that he was officially an American embassy employee who was considered part of the “administrative and technical staff.”

Of course none of that explains why he seems to refer to his Islamabad identification as his “old badge” or why he described himself as a consultant.

On Thursday February 17, there was a report on a national Pakistani news channel showing a lawyer representing the family members of the men shot dead by Raymond Davis talking to reporters. He was reminding the media and the nation of the inconsistencies in the US stance on the US citizen’s legal status and position in Pakistan – inconsistencies that have been throughly reported in the press in Pakistan (like in this article here).

Those inconsistencies revolve around official statements by the US government on Jan 28 and Jan 29, 2011.

On January 28, a day after the tragic event that saw two men, Faizan Haider and Muhammad Faheem, killed by Raymond Davis, and a third, Ubaid-ur-Rehman, killed in a hit-and-run incident involving a vehicle operated by US government staff, the Embassy of the United States in Islamabad issued this statement:

A staff member of the U.S. Consulate General in Lahore was involved in an incident yesterday that regrettably resulted in the loss of life. The U.S. Embassy is working with Pakistani authorities to determine the facts and work toward a resolution.

The next day on January 29, the US embassy put out a new official statement that included this:

“The diplomat, assigned to the U.S. Embassy in Islamabad, has a U.S. diplomatic passport and Pakistani visa valid until June 2012.”

Raymond Davis’s own words and the inconsistencies from the US government matter because as many people have discussed and explained in detail over the past three weeks in the media, the difference between diplomatic staff and consular staff is a large one where diplomatic immunity is concerned. While diplomats, including “technical and administrative” staff, have “inviolable” immunity in regards to criminal offences, a consular staff member has limited immunity that would be unavailable in cases where a “grave crime” has been committed (i.e. killing another human being).

The question that everyone is asking, though, is what do the official records of Pakistan’s foreign office show for the legal status of Raymond Davis: recognised diplomat, consular officer or other?

Click play to see the video clip obtained and broadcast by Dunya of Raymond Davis in the Lahore police thana on January 27, 2011.

Below are two official statements released by the US embassy following the deaths of three Pakistanis on January 27 in Lahore. 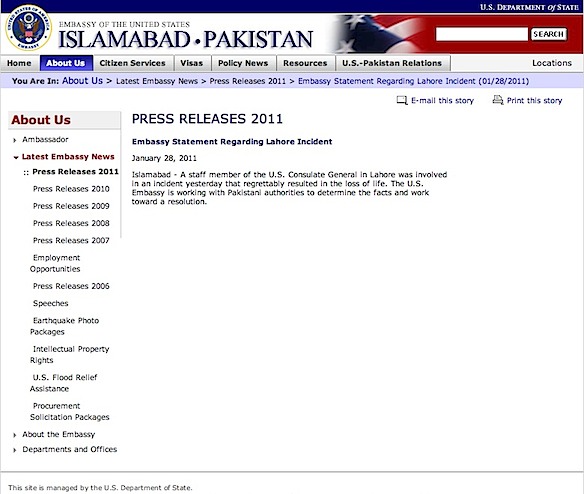 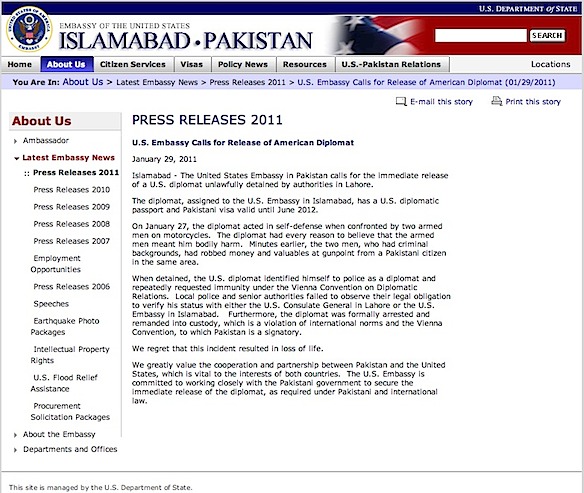