John Kerry Goes to Lahore to Sell the Case for Immunity

John Kerry came to Pakistan to talk about the importance of respecting the law.

It is hard to argue with that. All Pakistanis understand too well the consequences of a breakdown of law and order. So while Kerry spoke calmly, saying things such as “I have come here to listen” and “I have not come here to order anybody to do anything,” he also reminded the nation of Pakistan that the Vienna Convention is not an American law. It is not a set of rules that the US has recently concocted to suit their needs. It is a 50-year-old treaty between nations created by the global community. The US is a signatory and Pakistan is a signatory. It must be respected, “like it or not.”

It is clear that Senator Kerry came to Lahore on February 15 to drive this point home.

But obviously, he also came to drive this point home in the context of the US position on Raymond Davis, who shot dead two men in Lahore and whose actions led indirectly to the death of a third man in a hit-and-run accident. Specifically, the US position is that Raymond Davis is a diplomatic officer of the US Embassy in Islamabad and thus benefits from diplomatic immunity. “For us, there is no question of that,” said Kerry. “We know exactly what the papers say.”

Of course, his approach was warmer than the cold law. He talked about common goals between the US and Pakistan, long-term people-to-people relations and mutual dreams of peace. Senator Kerry also said other necessary things in order to bring some humanity to the US position. He talked about the “extraordinarily unfortunate incident” for which the US expresses its “deepest regret” and how he wants the Pakistani people to “understand the depth of our sorrow for this loss of life.” And he cleverly framed it all by quoting the Holy Prophet (p.b.u.h), saying that the Messenger of God preached about the most excellent act of “removing the wrongs of the injured.” The US senator and former presidential candidate added that that’s why he was in Lahore to speak to the Pakistani nation.

It was all well presented. 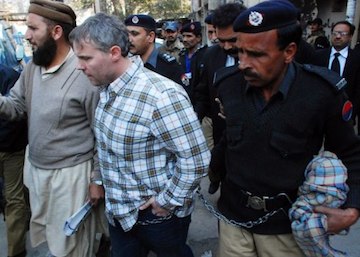 Raymond Davis is escorted from a Lahore courthouse by police in January 2011.

But who is Raymond Davis? Is he really a legitimate member of the US Embassy’s “technical and administrative staff?”

Though it has not been proven in a court of law (and may never have a chance to be done), the evidence that has been gathered so far portrays Raymond Davis as being a private security contractor, some sort of hired gun, or what some here would simply rather call a spy. So the question becomes this: was the Vienna Convention on Diplomatic Relations created to protect anyone who enters the country under the cover of a diplomatic passport, no matter what the scope of their work, whether legal or illegal? And if not, how is the international law set up to handle the cases where diplomatic passports have been issued in bad faith as some sort of insurance to people hired to break the law of the host country – people who roam the host country with loaded weapons, people who are hired to kill?

There is an inherent spirit of trust and message of goodwill in the preamble of the Vienna Convention on Diplomatic Relations. It talks about how the purpose of the “privileges and immunities is not to benefit individuals but to ensure the efficient performance of the functions of diplomatic missions as representing States” and how they should “contribute to the development of friendly relations among nations.”

So while John Kerry argued that “what is being asserted here is not a matter of American preference, or American privilege, or American arrogance… [but] a law that has existed for 50 years,” he is likely being disingenuous about the professional role of Raymond Davis in Pakistan and how immunity should apply to an American who knowingly violated Pakistani law by carrying a loaded weapon and killing two men in broad daylight. So what is ostensibly being asserted is deceitfulness.

What the Pakistani government needs to do is to make their position on the status of Raymond Davis clear and consistent. It should be based on facts, based in reality.

The problem is, the real identity and job of Davis likely won’t reflect well on the ruling PPP either. Because if Davis is a private military contractor working for the US government under diplomatic cover, it is very possible he is not the only hired gun who has entered Pakistan this way. And as diplomatic visas don’t get issued blindly, that means someone in Islamabad facilitated the scheme. It is doubtful it was a peon.