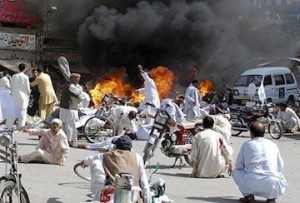 Muharram is always a tense time for Shias in Pakistan. Under the threat of attack by Sunni extremists, security during the month of mourning is incredibly high with Shia community groups working closely with local law-enforcement officials to protect men, women and children as they attend daily majlises and participate in Ashura day processions across the country. Road blocks and security checkpoints are set up around Imambargahs and are manned by vigilant local volunteers. In Lahore’s walled city, getting to Nisar Haveli for nightly majlises involves going through several checkpoints (often four or five) involving metal detectors and pat-downs.

In December 2009, deadly attacks rocked Karachi on Ashura: in total there were more than 100 people, injured or killed. While initial reports claimed that it was a suicide blast, it was later revealed that the bomb was detonated by remote control. And in Ramadan last year, bomb blasts in Lahore and Quetta caused dozens of casualties as Shias marked the death anniversary of Hazrat Ali (PBUH). A Lahore local involved with the planning of the public mourning procession told Newsline that police had “intelligence reports about something being planned.”

While security will never be foolproof, there is always more work to be done. In fact, there needs to be a greater commitment to protect minority groups and truly crack down on militant outfits. And this is exactly what Human Rights Watch (HRW) is pressing for in its latest report released today (reprinted below). “Shias in Pakistan should be able to participate in Ashura processions without fear of attack,” said Brad Adams, Asia director at HRW. In 2011, HRW says there have already been at least 18 sectarian attacks on Shias. Many attacks have been on the Hazara community in Balochistan. “In Balochistan, where local militants challenge government authority, and elsewhere across Pakistan, law enforcement officials have failed to intervene or prevent attacks on Shia and other vulnerable groups,” says HRW.

(New York, December 4, 2011) — The Pakistani government should urgently act to protect Shia Muslims in Pakistan from sectarian attack during the Muslim holy month of Moharram, Human Rights Watch said today.  In recent years, Sunni extremist groups in Pakistan have been implicated in a number of deadly attacks on Shia during Moharram, which in 2011 began on November 26.

“Shia in Pakistan should be able to participate in Ashura processions without fear of attack,” said Brad Adams, Asia director at Human Rights Watch. “Pakistani authorities need to address the severe danger faced by the Shia population with all necessary security measures. They can start by arresting extremist group members responsible for past attacks.”

Human Rights Watch has recorded at least 18 sectarian attacks on Shia in 2011. Since Pakistan’s return to constitutional rule in 2008, hundreds of Shia have been killed across Pakistan by alleged Sunni extremists. Human Rights Watch research indicates that at least 275 Shias, mostly of Hazara ethnicity, have been killed in sectarian attacks in the southwestern province of Balochistan alone since 2008.

On November 29, Mohammad Danish Alam, a Shia teacher at Balochistan University, became the latest victim of an apparent sectarian killing when he was gunned down by unidentified men in the Zarghoonabad suburb of Quetta, Balochistan’s capital. Local police reported that Alam, a science and information technology lecturer, was on his way to the university on his motorcycle when gunmen opened fire and killed him.

On October 4, gunmen on motorbikes stopped a bus carrying mostly Hazara Shia who were headed to work at a vegetable market on the outskirts of Quetta. The attackers forced the passengers off the bus, made them stand in a row, and then opened fire, killing 13 and wounding 6 others.

On September 19, near the town of Mastung in Balochistan, gunmen forced about 40 Hazara who had been traveling to Iran to visit Shia holy sites to disembark from their bus. They shot 26 dead and wounded 6. Although some of the Hazara escaped, gunmen killed another three as they tried to bring the wounded to a hospital in Quetta. Lashkar-e-Jhangvi, a Sunni militant group, claimed responsibility for this attack.

Pakistani and international human rights organizations, including Human Rights Watch, have made numerous calls to Pakistan’s authorities to hold those responsible for the attacks to account. While authorities claim to have arrested dozens of suspects, no one has been charged in these attacks.

“The ongoing targeted killings of Shia send a chilling message to all Pakistanis that their government won’t necessarily act to protect them,” Adams said. “The government’s failure to break up the extremist groups that carry out these attacks calls into question its commitment to protect all of its citizens.”

Some Sunni extremist groups are known to have links to the Pakistani military and its intelligence agencies. Groups such as the banned Lashkar-e Jhangvi operate with impunity even in areas where state authority is well established, such as Punjab province and the port city of Karachi. In Balochistan, where local militants challenge government authority, and elsewhere across Pakistan, law enforcement officials have failed to intervene or prevent attacks on Shia and other vulnerable groups.

Human Rights Watch called on Pakistan’s federal government and the respective provincial governments to apprehend quickly and appropriately prosecute those responsible for Alam’s killing, the September 19 and October 4 attacks, and other crimes targeting the Shia population.

“Pakistan’s civilian and military leaders should recognize that their tolerance for extremist groups is killing their own citizens,” Adams said. ”They need to stop appeasing extremists and start holding them accountable.”