As the World T20 2016 kicked off amid much hype focused on the Pakistan men’s team, fans barely spared a  thought for the women’s team also participating in the tournament.
But before long, our unsung heroines  proved their mettle in the mega event and earned the respect they truly deserve.

Despite putting up a valiant struggle, the team received little attention in the media until the girls took on India in the next game. This  game was scheduled on the same day as the clash of the men’s teams. While the Pakistani men’s team dashed the nation’s hopes, the girls in green rose to the occasion,  demonstrating unity and courage which has,in fact, remained a constant in all their matches.

Soon after their remarkable victory against India, the accolades started pouring in from different circles. But this was not the pinnacle of their performance. Following their triumph against India, the Pakistani girls also convincingly won against Bangladesh by nine wickets chasing a total of 114 runs.

Although our girls went on to be defeated by an extremely in-form and competitive English team,  the Pakistan’s women team in the World T20 did us proud and  warrants the serious attention of the Pakistan Cricket Board.

Traditionally,  male cricketers have been  idolised and earn millions in matches and endorsements, while women’s cricket in Pakistan is considered to be an amateur sport. Playing opportunities and training facilities are also scarce for girls, but it’s now high time to review this vast gap of resources.

Cricket remains a binding force across the various divides in Pakistan, and while some conservative circles habitually frown upon women in sports, the time has come to take a more progressive approach.  The women’s teams in England, Australia, New Zealand and now even India  have the benefit of an organized and structured approach to the game.

Short-lived appreciation and accolades  after a a couple of  big wins and sudden neglect shortly after is  tantamount to shattering the team’s morale. The bouquets must translate into concrete measure to improve and encourage women’s cricket in the country.

This responsibility falls squarely to the PCB  which must promote women’s sports and give the players a sense of security. Take a look at the PCB website, it’s largely full of information about men’s cricket — domestic and international. However, it does have a page describing PCB’s aims for promoting women’s cricket. 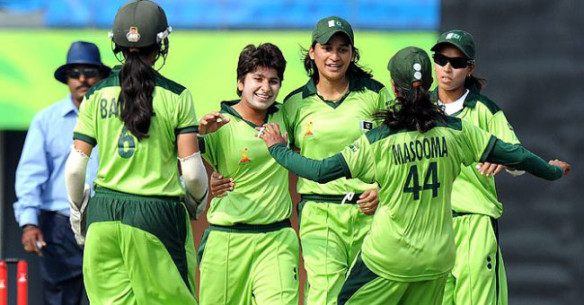 According to the website, the PCB annually spends a budget of approximately 110 million rupees for the promotion and development of the game, both at the domestic and international level. The cricket board further claims to have improved women’s cricket during the last nine years and claims that “now the game is recognised at par with the men’s level.”

If the sport is recognized at par with men’s cricket, why is  the PCB  lagging behind in promoting it on equal terms, even on its website?  It is time for the cricket board to shun lip-service and transform their words into action. The girls in green have surely earned it.