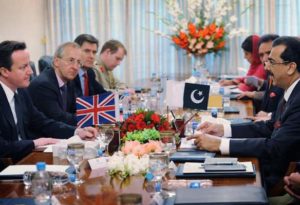 If anything, British PM David Cameron has proven one thing for sure with his recent visit to Islamabad: he is an astute politician. He has shown very brilliantly how to keep both “Raam and Raheem” happy when visiting their respective domains. A few months back, he had ruffled many feathers here by singing the anti-Pakistan tune from New Delhi with special emphasis on the “T” word. The “T” word, of course, stands for (very sadly) what Pakistan has been associated with in recent years; you guessed it: “Terrorism.”

Reversing course in Islamabad, and what is labelled as “succumbing to the galleries” back in the UK, Mr Cameron alluded to certain wrongs committed by Great Britain in the past. Needless to say, it did not bode well with his countrymen back home. The uproar in the UK was focused on why revisit the past and apologise for something that is history. There are plenty of wrongs committed by everyone including the “British Raj.” The world should move on, much like the Brits have. To some extent, the Brits may be right, but those who were offended by Cameron’s comments conveniently forgot that a career politician never misses a chance to secure applause. They thrive on it, whether they are at home or abroad.

The British really had an opportunity to fix a lot of their wrongs in the subcontinent, at least at the time, when they finally decided to leave India and granted independence to India and Pakistan. The concept of partition was well and good in theory, but in practice without proper monitoring it turned out to be the one of the worst bloodbaths in the history of mankind. The process of migration of people from both sides should have been monitored with certain conditions. The sheer haste that the Brits demonstrated in leaving India and the subsequent chaos that ensued is shameful. The inequitable division, which led to the formation of two very hostile neighbours, is also no secret.

Cameron’s U-turn in Pakistan is based upon his harsh realisation of the great significance of Pakistan in the global war on terror. Pakistan has taken a huge toll internally and externally by becoming the foot soldier for its western allies. The fact is, with or without the wrongfully dubbed “America’s War,” Pakistan is fully involved in Afghanistan to maintain its infamous “strategic depth.” The show of such depth is integral for Pakistan’s survival in order to counter any major moves by its archrival in neighbouring Afghanistan. Even if the US were to leave Afghanistan tomorrow, the net effect on Pakistan will probably remain the same. Those who think by reversing the course and readopting the Taliban would be the best strategy for Pakistan are really mistaken.

When Mr Cameron was busy “pleasing the galleries” here in Pakistan, there was a congressional panel in Washington recommending President Obama to abandon Pakistan and embrace India. According to some of the panellists, Pakistan is on “life support”, so to speak. They argued that it would be prudent for the US to align itself with the emerging and somewhat rightly labelled “Shining India.”

The strategy of abandoning Pakistan now, in the midst of all this, would likely backfire, much like it did for US back in the early 1980s when America left Afghanistan in shambles upon the Soviet retreat. The world witnessed its horrible repercussions and is still trying to struggle with the aftermath of such an ill-conceived strategy.

There are certain conflicts where force is not the most effective solution. At least not in a uniquely placed country like Afghanistan where conflict is another name for survival. The country has a long history of such conflicts and survival of the “strongest” seems to be the overarching principle. In this scenario, the best course of action is to play a constructive role in bringing an ideological paradigm shift both in Pakistan and Afghanistan.

The US, UK and other western allies should concentrate on the end game in Afghanistan. All military conflicts have to come to an eventual end. This particular one has been quite taxing on the economies of their respective countries. If anything, the conclusion of this game depends on political maturity in all countries (especially the US and Afghanistan) along with the development of a vigilant security apparatus in the war-torn central Asian nation that will prevent any questionable threat to gain momentum and reverse any progress.

The “cut-and-run theory” did not work in the past for British and for the Americans in their respective venues. Real change is witnessed by all when there is a stable government, thriving economy, freedom of religion and opportunities for all. If the US, UK and other western allies, really want to see a good return on their investment, so to speak, then they should be focusing on these initiatives. If they are our true friends indeed, then they have to demonstrate a true commitment to these measures. Empty stomachs and a lack of hope are the reasons people reason deviate and rebel. The Af-Pak region has been on a downward flight for too long: its time to alter its trajectory.