Forcing Children to be Suicide Bombers 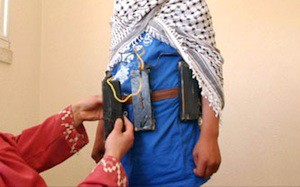 Violent extremists no longer need nor want the children they use to believe in their own deaths. Strapping them with bombs and setting them off is quicker, easier and certainly more cost-effective.

Hot summer months necessarily consist of stereotypes, such as the stickiness of mangoes or the saltiness of seawater. For me, the months of June and July are constructed entirely of paper. Throughout the academic year, I maintain a list of books I want to read. Books that my schoolwork does not allow me time to sink into. This summer, my list ran on for pages. I couldn’t wait. The problem was I had no idea where to begin.

A good place to start as any was Khushwant Singh’s Train to Pakistan, a novel I first came across five years ago. Back then, I never really got past the first page. But this summer I did: I got past it and zipped to the very last one in a single night. All these years I had been wondering how it is possible for a writer to describe a train arriving in a station, jammed with corpses, and what kind of story a writer can build around an image so powerful.

Perhaps the reason why I couldn’t put the book down was because it spoke to me of all the blood that was spilled and all the corpses buried in order for Pakistan to become its own nation. Weaved around the central motif of the train and its corpses was a complex story that raised questions about the place of women in society, the structure and role of government, the way we seek to achieve justice — questions that were raised back in 1947, but that are more urgent and pressing today.

And that image itself, of trains running through the dark, is not one from this country’s past. When I put the book down and finally managed to sleep, it was not partition-era trains that haunted my dreams. Instead, there were children, gagged, drugged and thrown into the backs of cars, trucks, minivans; all of them headed to training camps tucked into the rugged hills of South Waziristan. I awoke from this, as if from the sound of shrapnel.

When kids are kidnapped these days, it isn’t always for ransom. When two alleged TTP activists admitted recently that they kidnapped children from Karachi and sent them to Waziristan, where they are trained for suicide attacks, it betrayed a practice. I can’t offer any evidence about this practice, nor am I making any claims. Time and time again, though, the guilty limbs found strewn round blast sites belong to young boys. This, combined with the fact that training camps are known to exist, leads to the conclusion that it is at camps such as these where young male recruits are brainwashed into believing that strapping bomb vests on and blowing themselves up in order to kill others is the right thing, the only thing, to do. That this happens doesn’t shock me anymore.

Well, it didn’t until I read of a nine-year-old kidnapped in Peshawar in late June. I had two reasons to be shocked. This nine-year-old was a girl and the militants who kidnapped her took her to no training camp. Instead, they tried to force a suicide vest onto her.

It shouldn’t come as a surprise that militants have resorted to using little girls. They certainly had no respect for them when they bombed their schools in Swat. It is still somewhat hypocritical, though, to think of an entire gender as not good enough to educate yet good enough to use in their mission. Perhaps it is somewhat like an honour killing: to think of women as a stain to honour in general, and to use them as suicide bombers as punishment.

Or one could look at it from an entirely different angle. Maybe militants are modernising themselves, and curbing discrimination on the grounds of gender. Maybe this is a tragic step forward.

Of one thing I can be sure: this tactic is intensifying. Violent extremists no longer need nor want the children they use to believe in their own deaths. Strapping them with bombs and setting them off is quicker, easier and certainly more cost-effective.

Truth be told, this newfound method bothers me. It highlights a complete lack of morality and courage. To the militants: if you’re going to blow the world up, do it yourself, don’t find nine-year-olds (girls or boys) to do it for you. And clearly you can’t believe in your mission enough if you don’t educate your recruits about it. A tragic step forward indeed, even for you.