Film Review: The Wizard of Lies 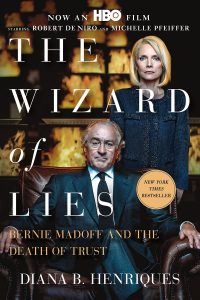 The recent HBO film, The Wizard of Lies, is based on the years just before and after the incarceration of Bernie Madoff — the architect of an unprecedented 65 billion dollar Ponzi scheme. It was, infact,  the most extensive and damaging financial fraud in US history. Based on elaborate fabrications, Madoff’ carried out a 16-year-long scam while he sat at the apex of the US financial food chain, swindling trusting investors out of their savings. When the global financial crisis of 2008 hit Madoff’s brokerage and securities firm, his financial empire finally began to collapse like a house of cards —  each card representing over a billion dollars of his clients’ life savings, driving them to financial ruin and into the streets.

But as the movie illustrates, the financial scam and Madoff himself were fraught with ironies. After a long spell, Robert De Niro has a substantive role and gives a superb portrayal of Madoff’s singular character with all its contradictions and shortcomings. Michelle Pfieffer, returning to the screen after a brief  hiatus, is suitably paired with De Niro to play Ruth Madoff, Bernie’s clueless wife.

The Wizard of Lies unfolds in prison where the incarcerated Madoff finally agrees to be interviewed by New York Times financial investigative reporter, Diana Henriques, the first person to visit him in prison apart from his wife and lawyers. Based on her book The Wizard of Lies: Bernie Madoff and The Death of Trust, Henriques appears in the film as herself, probing and questioning the once highly respected Wall Street financier about the consequences of his actions.

The film flashes back to 2008 when, sensing that his financial empire was about to unravel, Bernie mentally prepares his family by dropping the bombshell on them. The film focuses on the utter shock, disbelief, and later, the reactions of Mark and Andrew, Madoff’s two sons, when he reveals the true nature of his business. Meanwhile his distraught wife desperately tries to wrap her head around what her husband of 50 years had been  secretly nurturing during the last 16 years or more of their marriage.

It is significant that  that despite providing both his sons with cushy portfolios in his company, Bernard L. Madoff Investment Securities LLC, he never made them partners. He ensured neither ever came close to his real “Advisory” business. He conducted his wealth management business as a separate entity from the 17th floor of his offices with a handful of his most trusted employees. This included his lieutenant, Frank DiPascali, a street smart hustler who helped Madoff manipulate the day-to-day operations of the swindled billions. Ultimately it was Madoff’s sons who turned him over to the authorities for securities fraud.

Madoff pleaded guilty to 11 counts of financial fraud and was awarded a 150 year prison sentence — the maximum allowed. It is ironic that in the absence of a trial, Bernie’s sons felt that they were major victims of the whole situation.  It meant the public would not be privy to the truth that they had never partnered with their father to defraud their 4800 clients, thereby tainting their reputations forever. Putting Madoff on trial also meant putting the richest and the most powerful people in the world on the stand and under scrutiny – in other words, putting the world’s financial system on trial, which the-powers-that-be would never allow.

His crimes were extensive. Madoff was able to hoodwink the highest ranking officials of the U.S. Securities and Exchange Commission (SEC). Despite their attempts to scrutinise his business practices, they never uncovered the massive fraud he was perpetuating right under their noses. Ironically, on one occasion he had even been short-listed for the position of the SEC chairman. This was separate from the long list of financial forums he was a chairman of, including the former non-executive chairman of the NASDAQ.

Based on their candid prison conversations, Henriques shares her insights about this ultimate of fraudsters. Not surprisingly, he had a trustworthy quality which, Henriques says, was his asset as well as his curse. However, Madoff never seems to have quite comprehended the staggering human wreckage his actions left in their wake as he continued to  blame the “the rigged market” that he helped create.

Making any film on financial crimes relatable to the audience is tricky but Director Barry Levinson of Good Morning, Vietnam, Bugsy, Wag the Dog and Rain Man fame, has brought out the best from the book and his stellar cast in The Wizard of Lies. The only caveat is that the film does not touch enough upon the human toll of the Madoff scam.