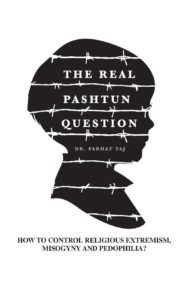 It becomes a tenuous exercise fraught with controversy when the culture of a group of people in an asymmetric federal structure is scrutinized, even if the ones doing the scrutiny belong to that same group. But it is necessary to look inward and question long-held values and beliefs. Only such introspection can reveal flaws within a society which may have been exploited by external agents, most often the state, for their own nefarious purposes.

In The Real Pashtun Question, Farhat Taj dissects the internal cultural narratives and male-dominated public spaces to find the answer as to why Pashtun lands remain in the grip of extremism and why the state is able to make it the ground for its policy of strategic depth. Farhat Taj hails from Kohat in Khyber Pakhtunkhwa, and was an Assistant Professor at Kohat University of Science and Technology. He is now based in Norway where he works as a researcher. The book presents exhaustive details of events, especially in Kurram, and the details are analyzed in a theoretical framework to arrive at conclusions.

Chapter one occupies one-third of the book and presents the Shia-Sunni conflict in Kurram in detail. The author has described the historical mode of conflict resolution between the Shia and Sunni tribes and through anecdotal as well as documented evidence has shown that there existed a goodwill and mutual trust between the Sunni and Shia tribes. For example the main mosque in Parachinar, the capital city of upper Kurram is Shia dominated as opposed to the lower Kurram where Sunnis are in majority. The Central JumaatAhle-e-Sunnat, was built on the land donated by the Shia Turi tribe and an individual from the Sunni Jaji tribe was made custodian of the mosque. The Shias in Kurram have traditionally relied on the state for protection and the political administration of the agency from the British era played an active role in intervening at the right time to resolve crises.

The political administration resolved issues among the tribes in 1961, 1972 and 1973, but things changed with the advent of the Afghan jihad. Parachinar is only 100 km away from Kabul. Kurram’s landmass extends into three important Afghanistan’s provinces: Khost, Paktia and Ningarhar. This extension is called Parrot’s beak. Just on the other side of Parachinar, in Afghanistan lies Tora Bora, the now famous mountain because of the heavy US bombardment in pursuit of Osama bin Laden.  Because of the strategic location of Kurram and especially Parachinar, it was of importance for Pakistan in the Afghan Jihad. The Arab Mujahedeen brought with themselves the rabid anti-Shia ideology and found allies in the local Sunnis.

Providing safe havens to the Mujahdeen became an existential threat to the Shias of Kurram, and they started to resist their land being used as a launching pad for jihad in Afghanistan. Then General Zia changed the demography of the agency by rehabilitating 350,000 Afghan refugees in Kurram, and this made the Shias a minority in Kurram. Later these refugees were motivated to cleanse lower Kurram of all Shias who then relocated to upper Kurram. The Shias of Kurram braved multiple assaults on their lands from the Taliban with no assistance from the security forces. A leadership vacuum was created when the elders of the agency and surrounding agencies were killed in targeted attacks and thus the conventional mode of resolving disputes was rendered ineffective. Then the establishment tried to introduce the Haqqanis as an alternate leadership for mediation.

The author has identified three main reasons for the oppression of the Shias of Kurram. First, the surrounding Sunni tribes have been eyeing the lands which belongs to Shia tribes according to ‘Kaaghazat-e-Maal’, the official land records. Second the state has manipulated this rivalry and has accommodated anti-Shia militants in the agency. Third, the dominant discourse in Pashtun society is formed by the Tablighi Jamaat which is a puritan Wahabi movement and its message often has an anti-Shia streak.

The government cannnot  be absolved of its role in entrenching an extremist mindset in the Pashtun lands. In 1984,1985 and in 1990,1991 out of the Auqaaf fund, Rs. 15,969 million were given to forty-two Madrassas in the then NWFP.  What gave the Taliban wider acceptance was their embodiment of much of Pashtuns’ ‘constitutive narratives’. Constitutive narratives are stories and images that shape the outlook of a community and represent core cultural values. The Taliban have taken these narratives a step further by couching them in global Islamist philosophy. The male egocentric view which the Taliban share with Pashtuns is based on badal (revenge), tarboorwali (rivalry), Siali (competition) and ghairat (honor), which form the basis of Pashtunwali.

Another evil in Pashtun culture is the almost-acceptable practice of pedophilia. According to the author this emerges from the benevolent sexism which sees women and children as weak and men as superiors who take care of them. In Pashtun culture benevolent sexism feeds into the power paradigm and with sex being a taboo subject, pedophilia becomes socially acceptable.  The Tablighi culture by its insistence on quietism and acceptance of ‘fate’ has encouraged society to comply with dictates such as benevolent sexism, and in the case of misogyny, this male-dominance has been sanctioned with religious and spiritual blessing.

The evils in any culture can be fought by laws implemented by the state and by social movements and by the convergence of such efforts. But unfortunately the state is not interested in reforming society through legislation. Instead the state is adamant in exploiting these very evils for its own agenda. FATA remains a lawless society as the centuries old FCR has rendered society static while in Khyber Pakhtunkhwa the state has invested heavily in Madaris and Tabligh, adding further to the religiosity which results in more extremism. KhudaiKhidmatgar led by Bacha Khan was one social reform movement with popular appeal but the British suppressed it because of its affiliation with the All India National Congress. Later the Pakistani state suppressed it because it was seen as a threat to the integrity of the country.

The book is an important addition to the scholarship on Pashtun culture and the relationship of Pashtuns to Pakistan. The anthropological research is presented in easy to digest terms and is backed by exhaustive detail which make it a must read for anyone interested in understanding the problems which have engulfed the Pashtun lands.