And the Stones Came Tumbling Down

I am not a writer so bear with me for the account of 26th October. I have been through a couple of wars in 1965 and 1971 manning submarines. I have weathered the  roughest of rough seas. However,  never have I been through an ordeal such as we did on this day. It was more horrific than any earlier experience as the situation was beyond my control and I was completely helpless. The intensity of joy that we experienced at the beautiful places we had just visited, and the wonderful company we had enjoyed, was perhaps matched by the ferocity of the horrific events that afternoon.

We left Chilas at 0730 for the 16 hour journey to Islamabad. The rugged scenery along the rapidly flowing Indus was a sight to behold. We passed the site of the Bhasha dam and I prayed that the it would be built soon. We drove over potholes which were barely relieved by spots of actual road. Thank God, after Dassu where we stopped for tea, the road was much better. The tarred surfaces now outnumbered the potholes. While passing though Pattan, I remembered the huge earthquake that had shattered the area some 45 years ago. The ruler of that time had promised to rebuild the area and make it comparable to Switzerland.  We did not see any signs of that promise however.

After leaving Pattan, we started climbing and left the Indus down in the valley below. We passed a small compound that housed the Chinese working on some project. We had hardly travelled a couple of kilometres when the young lad sitting near the driver pointed to a falling stone a few meters ahead. Our vigilant driver immediately braked and looked up. Then all hell broke loose. The stone was followed by what seemed to be the rest of the mountain and the road disappeared under it. Ilyas, the driver, reversed the coaster but the road behind us was blocked by falling boulders as well.

So now we were blocked into a 200 meter stretch of road.  Not familiar with the terrain I told everyone to stand as close to the cliff as possible as that was a comparatively safer place. The rocks were still falling onto the road and beyond. Right in front of us was an electric pole — a huge boulder crashed into it and both  disappeared down the valley, the wires of the pole parting like threads. We stayed glued to the cliff for what seemed like an eternity. I was holding my wife’s hand while she recited Quranic verses and, in between, kept reassuring everyone. She was the calmest of us all.

When there was a lull in the avalanche of stones, our driver started to turn the coaster around. The way forward was impossible and the only hope was to return to Pattan  about eight kilometres behind us. The road was narrow so the driver took about ten forward and backward movements to turn the vehicle. I would frantically bang the side of the coaster as the rear wheels reached the edge of the precipice. After turning the vehicle around, the driver ran back to the smaller blockade and started to clear a path for the coaster. We all joined him and after a while managed to clear enough room for the coaster to squeeze through. We all boarded and started driving back.

It was nothing short of a miracle that the coaster with us inside it had not been hit by the falling stones, but the damage  done to the under side of the vehicle scraping over the fallen stones was another story. During all this time, the rain fell incessantly and  smaller stones kept falling. We drove back to the Chinese compound which was comparatively flat and safe. I had three phones on me but none were working. I saw one of the locals outside the compound talking on his phone and requested him to use it. He agreed without any hesitation and I called  my family to inform them that we were still among the living and they should inform all those who care for us. I badly wanted to make some more calls but did want to abuse the generosity  of the poor man. The guards of the Chinese compound allowed me in and, through an interpreter, I asked if they would help to clear the road. He said that was not in their “Tender” to clear the roads and in any case it was too early to undertake that task. So I decided to walk back about six kilometres to Pattan  where we could find food and shelter. We all started walking, dodging a few still falling stones. A few of those in our group decided to stay back. But I decided to give it a try as we could not spend the night in that wet and cold weather. My wife and I started off accompanied by  a tyre salesman from Sheikhupura as well as us two other young men, albeit a couple of hundred meters behind. I was hoping  that beyond a another large blockade visible a kilometre ahead, there would be some cars who could give us  a lift back to the town. We walked more briskly in the areas where the stones had fallen and slower where it was clear, as the places littered with stones were more vulnerable and dangerous. In all, we walked briskly rather than slow most of the time. 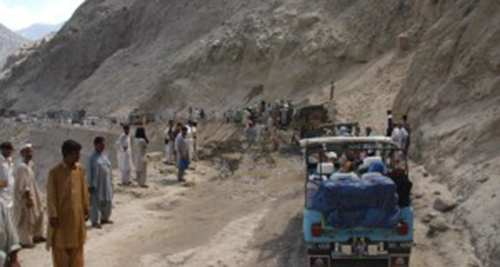 To our horror, there were no cars on the other side of the blockade. So now we were faced with a five kilometre walk in the rain that had continued unabated. Then suddenly, a rickety old black car appeared and on reaching the blockade started to turn back. I asked the driver of that car if he could take us to Pattan. He did not hesitate for a second. My wife sat in the front and myself and our other companion sat at the back. There was  already  another passenger sitting there. During the drive back, the inside of the windscreen was all fogged up but the driver appeared quite oblivious and didn’t seem to care whether  or not he could see the road ahead. But it was making me very nervous so I asked my wife  to clean the windscreen and she kept wiping  it with her bare hands. The driver said it didn’t bother him but to me it mattered that we proceed horizontally rather than vertically down the valley.  After having miraculously escaped the  rockslide unscathed, I wanted to stay that way. The gentleman brought us to an inn aptly named Kohistan tourist inn.  He ordered tea, paid for it and told the manager to look after us. Then he  left.

I quickly reserved ten rooms knowing full well that the rest of our 18 strong group  would eventually arrive. And so they did before the evening.  Our little inn was by a roaring stream that was used to generate electric power and so we had uninterrupted supply during our stay. We had a fairly comfortable night after the day’s traumatic experience.  On the 27th morning we started enquiries as to when the roads would be cleared so that we could continue our journey. The FWO teams were out by 0700 clearing the smaller blockages while bulldozers were expected to arrive later for the big boulders. We started our journey at 1030 a.m and wound our way through many cleared blockages  and reached Rawalpindi at 10 p.m.

In the end, it was only prayers and the infinite mercy of the Almighty that we escaped unscathed from this ordeal.