Vivid and Emotional Photographs of the Floods in Pakistan

There have been many shocking photographs of the floods over the past three weeks. Through them, the scale of the destruction has come through, as has the level of desperation. These pictures have not only shown Pakistanis the disaster that looks set to cripple their already hobbled nation but also shown the world the reality of what UN chief Ban Ki-moon calls the greatest disaster he has ever witnessed: “In the past I have visited scenes of many natural disasters around the world, but nothing like this. The scale of this disaster is so large and there are so many people in so many places in so much need.”

At Boston.com, the editors have assembled in one place some of the most vivid photographs from the continuing disaster in Pakistan. Sadly, as the monsoon rains continue, more images of devastation and despair are likely to hit the media. This tragedy continues and the after-effects will be huge and lingering.

Hopefully, the images will get the world to open up their pocket books a little further, as the need for financial assistance grows by the hour.


Click here to see the assembled photo gallery at Boston.com. 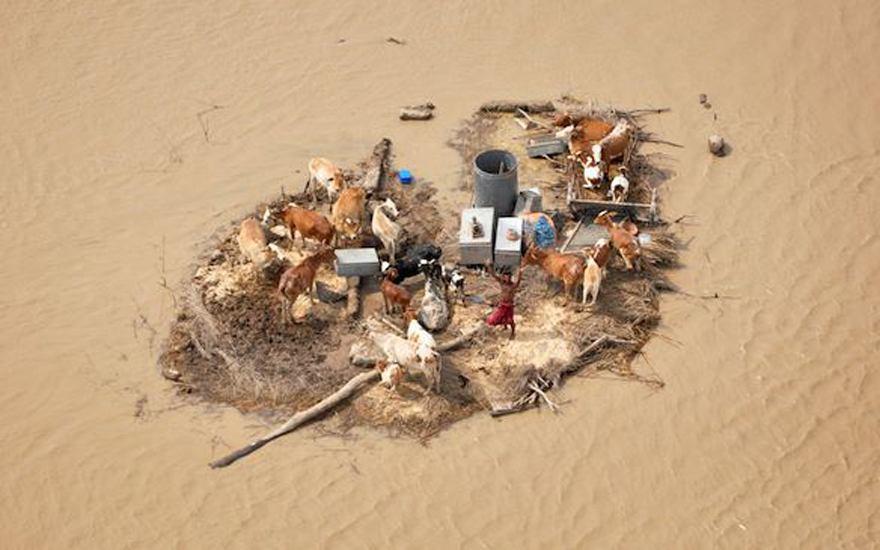 A man and his livestock are marooned by flood waters. He waves towards an Army helicopter for relief handouts in the Rajanpur district of Pakistan’s Punjab province on August 9, 2010. Source: boston.com (REUTERS/Stringer)