The Text of the SC Decision for the Mukhtaran Mai Case 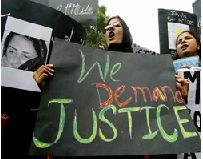 By now you’ve heard about the latest verdict in the Mukhtaran Mai case. To many, the fact that the Supreme Court of Pakistan could render such a judgement (see below to download the full 90-page decision) to release five of the accused is confusing. It seemed like the facts of the rape case were well known and established, witnesses had been produced and the main accused, Abdul Khaliq, was proven to have not acted alone. But only Khaliq remains in jail. Recently, Aitzaz Ahsan told Newsline‘s Zara Farooqui that the recent appeal by his team for Mukhtaran Mai against the Lahore High Court verdict had gone well:

Undoubtedly, he, like Mukhtaran Mai, and many across the nation, will be angry over the outcome. Comments on the Internet and on twitter show the disgust that people feel. Here are a few tweets:

#MukhtarMai may not have been given justice, but she sure as hell invokes the lawyer in all of us.

Acquittal instead of exemplary punishment. Sad and shameful, but after all it is Pakistan we are talking about. #mukhtarmai

If you were on that Long March for an independent judiciary….. I suggest you continue walking #MukhtarMai #Pak… http://bit.ly/hGvGRW

No court can weaken my resolve to stand against injustice

Amazingly, as Newsline‘s Farieha Aziz points out, many in the media not only seemed to support the decision but had no understanding of the justice system, government or, for that matter, reality. One reporter asked Anis Haroon, the chairperson of the National Commission on the Status of Women, “Will you go for repeal in America?”

In view of the majority decision, all the noted appeals are hereby dismissed. The suo moto action initiated by this Court vide order dated 14.3.2005 in the matter is also discharged. Therefore, all those who were arrested pursuant to the order of this Court dated 28.6.2005 if not required in any other case be released forthwith. Abdul Khaliq, however shall be released after serving his sentence as awarded to him by the learned High Court, the benefit of Section 382 Criminal Procedure Code extended to him by that Court is also maintained.

Understanding the court’s final decision (it was a two-to-one decision where the dissenting judge actually convicted five men of zina, but where the majority judges only found one man, Abdul Khaliq guilty of rape) might seem impossible for many people. But reading the judgement does clarify and confirm some issues. Ostensibly, some statements and analyses within the judgement could leave readers surprised. (Even the dissenting judge made some surprising conclusions: read the second last excerpt listed below in which it seems like it has been concluded that the room in which Mukhtaran Mai was raped was dark – too dark to see clearly). A link to the full judgement can be found at the end of this post.

To start, though, here are some excerpts from the judgement of the majority judges:

What is the basis of the lady doctor’s opinion that she was raped? Yes, she was subjected to sexual intercourse, but the question is whether by one person or forcibly four as the prosecution has set out.

The DNA and/or group semen test in this case was of immense importance which could have scientifically determined as to whether the intercourse with the prosecutrix was committed only by Khaliq or by a group of person. Therefore, in our considered view, the benefit of this omission should go to the accused, rather the prosecution.

While concluding we share the view of the Courts that no case for abduction was made out by the prosecution, notwithstanding the distance; we are not convinced that prosecutrix was taken to the room as has been alleged by her.

And here are some excerpts from the judgement of the dissenting judge, Nasir-ul-Mulk:

The contradictions of the prosecution case mentioned in the impugned judgment and also highlighted by the learned defence counsel are not so significant as to render the entire prosecution case false. Some of the contradictions between statements of the prosecution witnesses about minute details of the various stages of the episode, from the detention of Abdul Shakoor right up to the commission of rape, spreading over several hours can be attributed to the hectic activities and tension between the two groups, particularly in the complainant’s camp. Even otherwise the contradictions taken into consideration by the High Court were mainly with reference to the statements made by the witnesses to the fact finding enquiry, which were never proved.

The Panchayat thus approved and facilitated the commission of zina-bil-jabr.

The complainant had charged four accused for gang rape; Abdul Khaliq, his brother, Allah Ditta, Faiz Muhammad and Ghulam Fareed. All the four were convicted by the Trial Court under Section 10(4) of Offence of Zina (Enforcement of Hadood) Ordinance, 1979 and each of them sentenced to death. For the reasons afore-stated, rape by Abdul Khaliq stands proved beyond shadow of doubt. He was the main figure in the entire episode, playing the lead role from locking up of Abdul Shakoor to dragging the complainant to his house.

As regards Fayyaz accused, undisputedly a resident of Rampur, and not a mastoi, the defence case has been that he was mistaken for another Muhammad Fayyaz, resident of Mirwali, a mastoi and cousin of Abdul Khaliq.

The complainant was subjected to rape in a room in the house of Abdul Khaliq at around mid night. The prosecution evidence is completely silent about the source of light in the room. The site plan carries a note by the investigating officer that he was informed that it was a moon lit night, thereby tacitly confirming the absence of electric light in the room. The complainant had charged four accused for the rape. The only sentence for gang rape under Section 10(4) of Offence of Zina (Enforcement of Hadood) Ordinance, 1979 is death. The complainant’s allegation of being gang raped may not be false but in such a situation where one of the accused, Fayyaz, is being given benefit of doubt and acquitted of the charge of rape, and there was no light in the room where the incident took place, it may be unsafe to convict the other two accused of offence under Section 10(4) of Offence of Zina (Enforcement of Hadood) Ordinance, 1979.

The High Court, as observed above, erred in holding that the delay in lodging of F.I.R. is fatal to the prosecution case; that the testimony of a rape victim requires corroboration. The Court had overlooked that there was corroboration of the complainant’s testimony. The Court failed to give due attention and weight to the testimony of the victim of the rape and its findings were considerably influenced by its erroneous view about the role of P.W. Maulvi Abdul Razzaq. The High Court was not entitled to use, and that too extensively, for the purpose of highlighting inconsistencies in the prosecution case, the statements recorded by Mirza Muhammad Abbas (P.W.6), during the facts finding inquiry…

Updates and changes have been made to this post since it was originally published. Last updated on May 28, 2011.