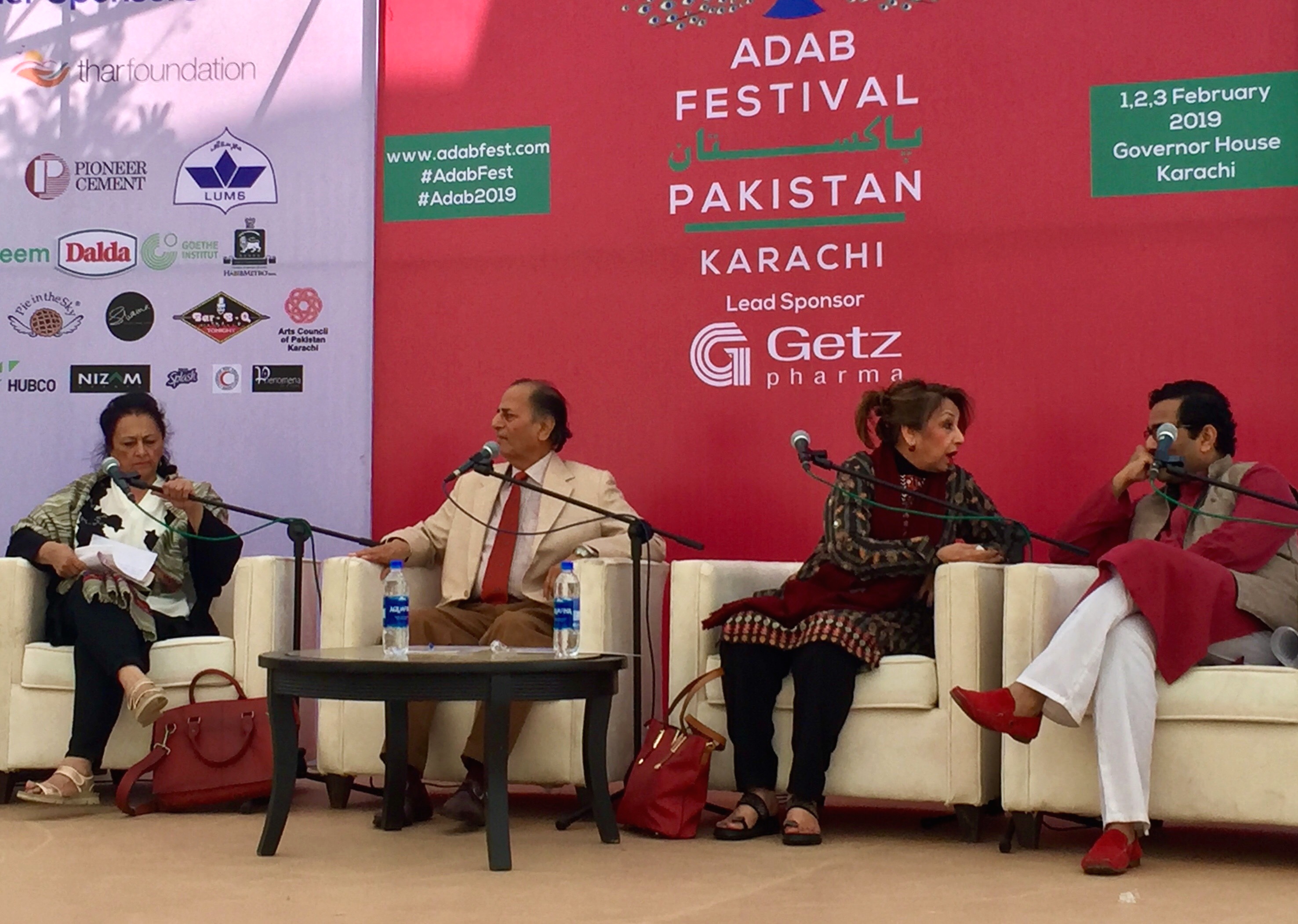 Panelists discuss the Hur insurgencies at the Adab Festival in Karachi.

Sindh’s Governor House, a symbol of colonial supremacy and former site of the comparatively humble Government House, from where General Charles Napier held sway over the province, was the venue for a talk on rebellion against British rule. On February 2, 2019 – the second day of Karachi’s Adab Festival – former IGP Sindh, Aftab Nabi, spoke on the Hur insurgency of 1941-46 and the reign of martial law imposed from 1942-43 by the British administration. Moderated by Masood Lohar, the panel included historian Dr Yaqoob Khan Bangash, academic Dr Zaituna Y Umer and political personality Mehtab Rashidi.

Nabi opened the talk by highlighting that there were two Hur insurgencies: one that was led by Bachal Khashkeli (Bachoo Badshah) with the support of Peeru Wazir in the early 1890s, and another that arose as a reaction to the arrest of Pir Sibghatullah Shah Rashdi II by the British authorities in October 1941.

The first insurgency, he explained, was crushed in 1896 through various repressive techniques administered by the army and police. Bachoo Badshah surrendered and was made to believe he had been given life imprisonment, but was instead hanged and buried under a road. He was not given a funeral, or allowed a grave, out of fear that it may turn into a shrine. By 1900, the British authorities had declared the Hurs a ‘Criminal Tribe,’ under the Criminal Tribes Act of 1871, which operated on the presumption that criminality was the hereditary profession of various tribes of the Subcontinent. However, according to Nabi, the Hurs were not a tribe, but a collection of clans belonging to various tribes, such as the Khashkelis and Nizamanis.

The leader of the second insurgency, Pir Sibghatullah Shah Rashdi II, ascended to the throne at the age of 12 and refused to kowtow to the British or collaborate with them. “The British tried to bring him into line, but he resisted,” said Nabi. “A process – what would now be referred to as a media trial – of maligning him in the local press and in government reports, started, and he was made out to be a monster. There were various allegations against him. 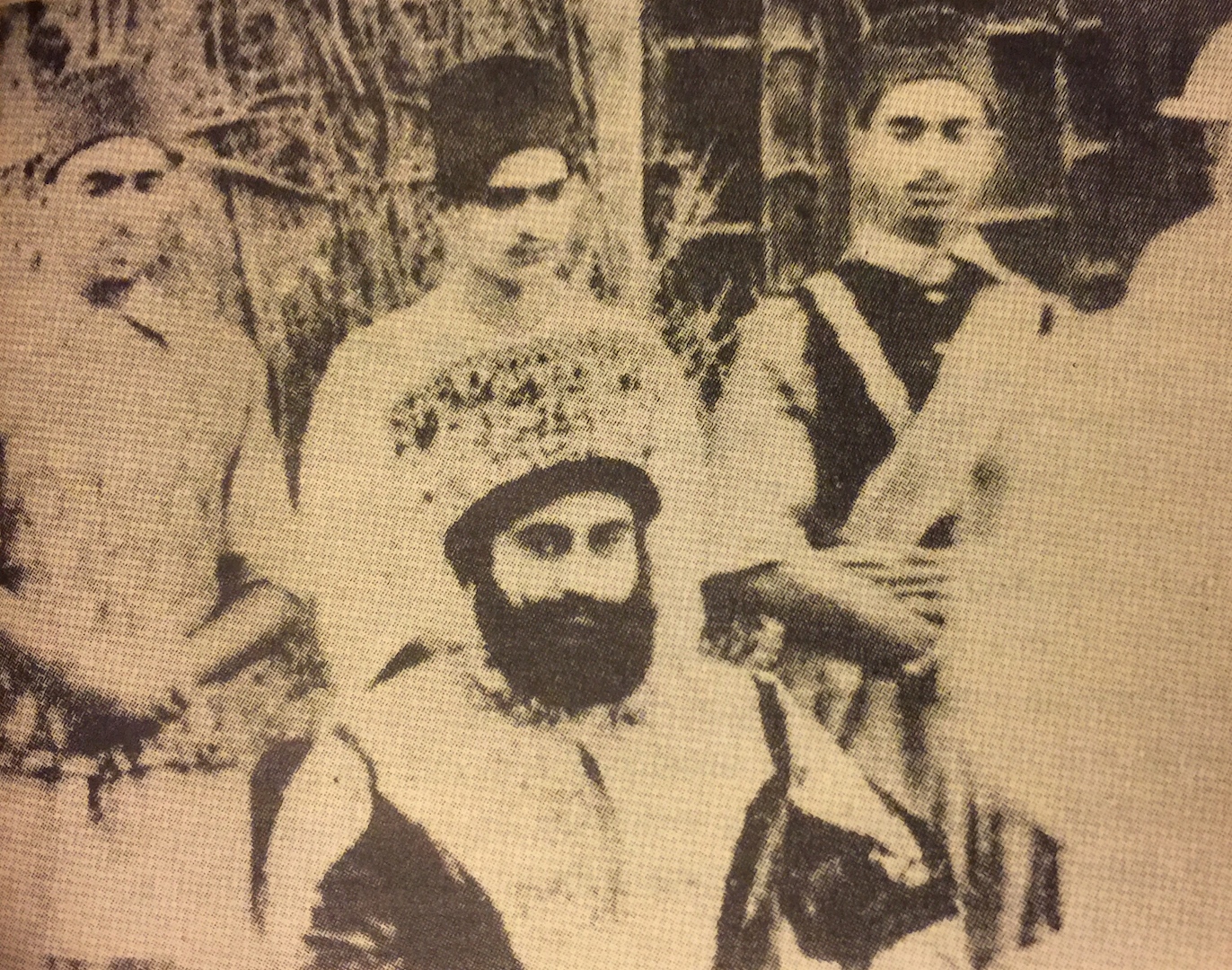 “Finally, in 1930, a case was registered against him on three counts,” continued Nabi. “The first count was murder, the second was kidnapping – what came to be known as ‘the boy in the box’ – and the third count was the possession of illegal arms and ammunition. The charge of murder was dropped, because the police and district magistrate realised that for this, the requirement of cross-examination would have been rigorous and the prepared witnesses would have backed down or been afraid to attend.”

The charge of kidnapping, however, was quite strong. It involved the unlawful imprisonment in a wooden box of a boy named Ibrahim Koree, by Pir Sibghatullah who had a penchant for sodomy. When the district SP by the name of Judge raided the Pir’s home, he discovered the boy. “As far as the count of keeping illegal weapons was concerned, that was a trick played by the British authorities,” says Nabi. A clause in the Arms Act gave the British “the power to give exemption under the Arms Act. Like many other big waderas, Pir Sibghatullah had those exemtions. However, since the British had been planning for a long time, to nab the Pir in one way or another, they cancelled those exemptions (in order to make it look fair, they cancelled them for everyone – even though they did not arrest everyone) and arrested him and he was convicted for eight years.

The Pir had hired Muhammad Ali Jinnah as his lawyer, for a fee of Rs 60,000 – a handsome sum in the 1930s. “Jinnah put up a very strong case, however, the appeal was rejected,” continued Nabi. “Jinnah said, ‘If this is the quality of justice in Sindh, then Sindh is not a place worth living in.’”

Pir Sibghatullah was first sent to Ratnagiri Jail, which lies south of Bombay, followed by Alipore Jail in West Bengal, then to Dhaka Jail and finally to Rajshahi Jail. “The 1930s, in the history of British India, was a very troublesome time,” he says. “It was a time when the Bengali terrorists and Punjabi terrorists were creating havoc for the British, killing, for example, viceroy Lord Mayo during his visit to the Andaman Islands, an IG police in Bengal, a few district magistrates, a commissioner, while Bhagat Singh killed an ASP in Lahore and there were hundreds of other cases.

“Most of the Bengali terrorists were also in jail in Bengal, as were many of the staunch Congressites. British CID reports [in Bengal] repeatedly projected that Pir Sibghatullah Shah was hobnobbing with these and he was trying to acquire the techniques for bomb-making, refilling cartridges, assembling and re-assembling weaponry and that he had developed strong leanings towards Congress. For every report, a copy went to the CID in Sindh under instructions of the federal government. The reports were that he was smuggling out books, pamphlets, in which messages had been inscribed for the Hurs. One of the messages was that the British consider the people of India as donkeys, and another that it is far better to die than lead the life of servants.”

Nabi added that a comprehesive intelligence file was created on the Pir and around early 1936, according to the jail manual, he received certain remissions and so instead of eight years, he was to be released after six-and-a-half. By 1935, Sindh had gained the status of a separate province and its politicians had realised the importance of Pir Pagara – his followers in particular. One order from the Pir would send 80 to 90 thousand Hurs on the march. “Most of the big politicians, including Sir Ghulam Hussain Hidayatullah, Sir Shahnawaz Bhutto, pleaded with the federal authorities,”he said. However, the CID and the Sindh government sent repeated reports to the federal government that the Pir should not be released and instead be sent to Kala Pani, the dreaded jail on the Andaman Islands, from where nobody returned. Nevertheless, the federal government ultimately released him.

On his journey home, around November 1936, the Hurs had hired a private a train from Lahore to Rhori, and all along the route, there were hordes of Hurs and public, and the Pir was greeted with garlands by virtually everyone, including most of the top politicians of Sindh. After a few days even the then governor of Sindh, Sir Lancelot Graham, greeted him via a telegram. “All the local politicians flocked to him,” said Nabi. In early 1937, the Pir decided to go on Haj and subsequently, visited Iraq and Egypt.

On his return to Sindh, he was surveilled by the CID 24 hours a day. Between 1937 and 1941, reports claimed that he was murdering his relatives, including Pir Fateh Ali Shah, who was killed in 1941, just before the Pir’s arrest. During these years, the Pir was at first stationed in Karachi but then packed up and left for Pir Jo Goth on a whim, without obtaining official permission. Also around this period, winds of conspiracy had begun to blow. A group of maulvis, who were going around lecturing against the Pir’s tenets, were among the conspirators. All were murdered. Despite the lack of adequate proof, the Pir was charged with murder. Ultimately, after a detailed interrogation, he was ordered to be confined to Karachi.

Dr Yaqoob Bangash explained that one of the reasons why the British were uneasy with the Hurs was because they could not place them anywhere. They were not resident in one place and kept moving on the orders of Pir Pagaro. “This was something the colonials couldn’t understand,” he said. “And wherever they found this in India, or anywhere else in the Empire, they reacted against it.”

Bangash, who has done a study on India’s princely states, relates this constant movement to the habits of other members of Sindhi society, such as the Mirs of Khairpur. Faiz Mahal, he points out, was built as a hall of audience, or court, because the British insisted that the royal Talpur family should build such a structure. “The Khaipur Mirs used to live in tents,” said Bangash, and only after years of cajoling and pursuasion by the resident British political agent, built a mahal. But even then, they continued to live outside in tents. Such was the environment in northern Sindh and it was one that made the British uneasy. “It was something that the British didn’t get,” he added. One of the reasons why the Criminal Tribes Act was promulgated in the first place was because of the British belief that any group of people who do not settle in one area, must be criminals. This, Bangash explained, had its roots in ‘Thuggee’ in the 1830s and 40s, where certain groups of people were constantly on the move so that they could ambush caravans.

“The Khairpur Mirs were very happy when the British went against the Hurs, because they did not like them either,” continued Bangash. Nabi added that the administration found it difficult to deal with the Hurs, because they were spread in the Nara, Sanghar, Tharparkar and Badin regions in particular. Nabi referred to the remarks of Percival Griffiths, an ICS officer who was an IG in the Bombay Presidency and author of To Guard My People: History of the Indian Police. Griffith had stated that the Hurs should not have been brought under the Criminal Tribes Act and that this was done out of political necessity, to ensure that they collaborate with the administration.

Despite Pir Sibghatullah’s sadistic and murderous tendencies and the fact that he kept his love interest locked up in a wooden box, Mehtab Rashdi felt that he must be remembered as a freedom fighter. The question to be asked, she said, was why Sindhis today have not owned, or embraced his legacy. She lamented that the freedom struggle of the Hurs had been forgotten, or erased from memory, and they were instead viewed as “dacoits and savages. But there must be a reason why they behaved like this.” She added that the Pir was not functioning only at the Sindh-level, but at an all-India level and was raising important questions regarding the submissiveness of colonial subjects. “The Hurs were kept in settlements known in Sindhi as lorhas – the equivalent of concentration camps,” she said. “Families were confined to these for years. I can see people sitting in front of me in the audience, whose fathers were born in these camps.”

Broadening the debate, Zaituna Y Umer said that the British imperialists’ attitudes toward the Hurs must be seen through the prism of their philosophy, tactics and strategy in Sindh as a whole, from the 1840s till the 1940s. General Charles Napier, she said, provoked the Talpurs into war, despite the fact that they were peace-loving rulers. She cited Napier’s infamous quote in which he described the annexation of Sindh as an “advantageous piece of rascality.” Umer explained that the British colonialists in Sindh were “quite violent, oppressive and completely oblivious to public opinion.” She referred to the origins of the press in India in 1780 and its pioneer, James Augustus Hickey, who published Hicky’s Bengal Gazette, exposing the corrupt practices of British officials.