The Afghan Endgame: Is Durable Peace a Mirage? 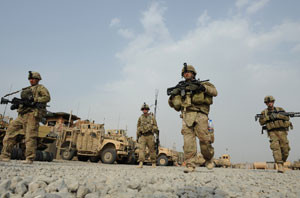 For a while now, there has been talk of an Afghan endgame and President Barack Obama’s recent announcement of a phased drawdown of US troops from Afghanistan beginning July 2011 is being interpreted as evidence of the beginning of the end of the long drawn out “great game” in this Central Asian country and its neighbourhood. However, there are those who believe that this will only be the beginning of another round of chaos in Afghanistan and the region.

Afghanistan is not new to withdrawals, takeovers and regime changes; in fact, its history is littered with such examples: the withdrawal of Soviet troops in early 1989, the collapse of President Najibullah’s Communist regime in 1992, the coming to power of the Afghan mujahideen in 1992 and, later, the Taliban in 1996, and the 2001 fall of the Taliban regime and its replacement by the Hamid Karzai-led government installed by the US. Every time, there was promise of change and hope for peace and stability finally returning to this strange and fascinating country. But, each time, short durations of peace and normalcy were followed by long periods of violence and instability.

It is difficult to visualise an endgame in an unpredictable place such as Afghanistan where the ongoing conflict in its different phases has been continuing for well around 33 years. Triggered by the Saur Revolution staged by the Moscow-backed Afghan army officers in April 1978, the conflict first pitted Afghan Communists against the mujahideen, then the mujahideen versus the Taliban and now the Taliban against an alliance of pro-West elements led by Hamid Karzai (comprised former Northern Alliance warlords and “reformed” mujahideen and Communists). The situation was further complicated due to the invasion of Afghanistan, first by the Soviet Union in December 1979 and then in October 2001 by the US. The two superpowers militarily intervened to remove unwanted regimes and install their Afghan favourites into positions of power.

Yet another alien force became involved in the Afghan conflict with the arrival of thousands of foreign Islamist fighters from all over the world to fight on the side of the mujahideen, initially against the Soviet occupying forces, and then against NATO. From this chaos emerged Osama bin Laden’s Al Qaeda, which declared jihad against the US and Israel from its sanctuary in Afghanistan. The 9/11 attacks against the US brought western forces to Afghanistan in late 2001 to seek revenge from Al Qaeda and its Taliban allies and, now, 10 years later, the first steps have been announced to withdraw some of these troops under a timetable that would stretch until 2014.

The presence of US-led foreign forces from 49 countries has not brought any stability to Afghanistan; rather, their prolonged presence has fuelled a strong resistance movement spearheaded by the Taliban and has provided them with a reason to continue waging war. But there isn’t much hope that Afghanistan will become a peaceful and stable country once the last western soldier has departed as planned in 2014. There is the danger that the drawdown of the 150,000 foreign troops — even if it is going to be in phases until 2014 — and the handing over of security duties to Afghanistan’s untried security forces as part of the transition could trigger a furious struggle for power between the many claimants to power, including the Taliban, and even spark a civil war among the ethnic-based armed groups. In fact, instability and the worry of a Taliban takeover could delay the withdrawal of NATO forces or prompt the US to retain a sizeable military presence in Afghanistan as it did in Iraq.

Already, there is talk of the possibility of permanent US military bases dotting the Afghan landscape beyond the withdrawal year of 2014. The ongoing expansion of several existing US military land and air bases and the frenzied construction activity now underway cannot be an isolated occurrence. It is clearly part of the post-2014 military plans by Washington to station the US Special Forces and combat troops in four or five permanent military bases including the biggest one at Bagram for use against Al Qaeda, Taliban and other inimical groups, and in support of the Afghan government. The groundwork for this is already being done under the strategic alliance agreement being negotiated by the US and the Afghan government.

Quiet negotiations between Afghan and US officials have been ongoing for some time now to finalise the strategic partnership agreement, with both sides keen to formalise their relationship. The Afghan government appears more keen to do so as it wants a guaranteed US military back-up support beyond 2004 to keep the Taliban and former mujahideen leader Gulbuddin Hekmatyar’s Hezb-i-Islami and other armed opponents at bay in the event of the withdrawal of NATO troops. Those that have sided with the US are understandably concerned about their own future and survival due to fears that the armed opposition, particularly the Taliban, would be unstoppable once the foreign forces pull out of Afghanistan. Karzai and his supporters risk losing not only power but also their fortune and lives if left on their own to face a determined and ferocious foe like the Taliban. 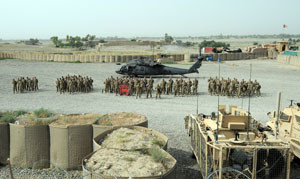 The US is also keen to legalise its permanent military presence in Afghanistan to prevent the Taliban from taking over the country again and Al Qaeda from finding sanctuaries, even though the latter has been considerably weakened following the loss of bin Laden and several other stalwarts, and due to a lack of secure bases. The US must also have realised by now the benefits of military bases in Afghanistan close to the borders with China, Iran, Pakistan and the Central Asian countries, some of which have security-based ties with Russia. These bases serve as a window to these countries and are centrally located for use in emergencies. Besides, not far away are the rich oil and gas deposits in the Caspian Sea and the Central Asian republics that are likely to assume value in the times to come. More importantly, the US government officials and analysts have repeatedly articulated that it was a mistake to abandon Afghanistan after the Red Army’s withdrawal in February 1989 and allow its subsequent takeover by the Taliban and Al Qaeda. With their insistence that the same mistake not be repeated again, one could draw the conclusion that the US is likely to make arrangements to maintain a military presence in Afghanistan and in its neighbourhood to deny sanctuaries to groups violently opposed to it.

Securing such a deal from the weak Afghan government won’t be a problem. President Karzai has been sounding off the Afghan people about the US wish for permanent military bases in Afghanistan and reassuring regional countries that such bases won’t be used against them. The US government functionaries, on the other hand, have been ruling out such a possibility, but their denials are unconvincing. Instead of referring to them as US military bases, these are now being mentioned as joint Afghan-US bases to dilute likely opposition to the idea. There has been some opposition among Karzai’s allies such as the Tajik warlord and water and power minister Ismail Khan, to permanent US bases, and Iran and China are understandably alarmed with the former making its opposition publicly known. Pakistan is watching the developments with concern as it knows that permanent US military bases in Afghanistan could mean permanent instability in the region.

The Karzai government is working on a plan to convene the Loya Jirga, a traditional assembly of Afghan elders in times of emergencies, to seek advice on the issue of strategic alliance agreement with the US and its permanent military bases in Afghanistan. Loya Jirgas have been used by successive Afghan rulers to seek legitimacy for their rule and for the approval of major decisions — and manipulating decision-making at this platform isn’t difficult as the invitees are all handpicked. Upon receiving a go-ahead from the Loya Jirga, parliament’s approval could easily be obtained and the strategic partnership agreement with the US would officially be a done deal. However, such a move could also seal the fate of any chances of political reconciliation with the Taliban, who have pledged to continue their fight until the last foreign soldier leaves Afghanistan.

In such a scenario, Obama’s decision to withdraw the 33,000 “surge” US troops by September 2012 and the subsequent announcement by the governments of France, Germany, Australia and other countries about their plans to start drawing down their forces won’t mean much in terms of bringing the Afghan conflict to an end. The peace talks being held with the Taliban at this stage are “talks about talks” and hold little promise of yielding a breakthrough. It is an unfortunate fact that durable peace in Afghanistan is more a mirage than a reality.

This article was originally published in the July 2011 issue of Newsline under the title “The Afghan Endgame.”