I was standing on the top of a sand dune on the edges of the Great Sand Sea, watching the orange sun disappear behind 50-metre-high dunes, when I noticed the Korean backpackers next to me. Both of them had one sneaker off, and were rapidly pulling off their socks. I raised an eyebrow as one of them stuck their foot in their sand. The other followed suit. He let out a sigh, noticed me watching him and nodded. “Soft,” he said.

I couldn’t resist. I shucked off my shoes. The cool sand felt like baby powder between my toes.

Seconds later, our guide, a lanky Siwi-Berber man hiked up the dune with what looked like a plank of wood. We lined up, a hodgepodge of students, backpackers, and honeymooning couples each ready to try what he called sandboarding — advertised as being similar to snowboarding, except on the dunes of the desert. 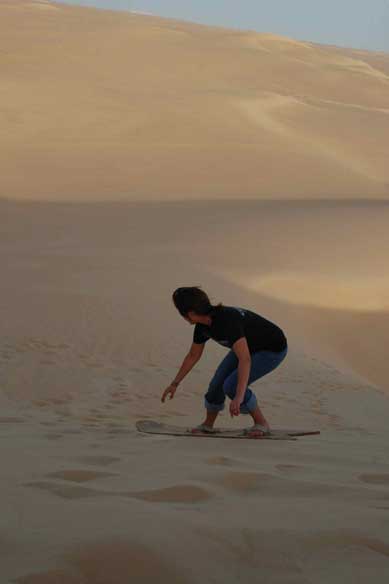 A woman sandboarding on the golden dunes of the Great Sand Sea near Bir Wahed. Photo: Mariya Karimjee.

That marked the beginning of my overnight safariexperience to Bir Wahed, organised out of Siwa, Egypt, byPalm Trees, the budget hotel at which we were staying.

Bir Wahed is only about 12 km southwest of Siwa, easily doable in a half-day or one-day safari from the oasis, but the idea of sleeping in the desert’s enormous sand dunes, under stars that looked like textbook pictures of the Milky Way was too magical to skip. That night we watched our traditional Siwi dinner roast on a fire pit, as we pulled on sweatshirts to avoid the biting chill.

We were served traditional Siwan green tea around a campfire, and I sat, my knees pulled close to my chest before I heard the faint drumming. I looked around, and realised that our cook had brought out a set of drums. Our jeep driver pulled out a wooden flute, and suddenly, under the glistening stars we were having an impromptu desert party. It took me less than a minute to join the honeymooning couple in a dance, and suddenly almost everyone around me had joined in. It was past midnight and the air was syrupy from the earlier roast. Almost an hour later, we crawled into the tents that our guides had provided.

The dune driving through the rolling sand dunes, the hot and cold springs that we swam at, and the sandboarding ran us 70-110 Egyptian pounds per head (depending on how hard you haggled).  A safari license (to register with the Ministry of Tourism) and dinner was included in that price, but we lugged around our own bottles, each full of Siwa Oasis spring water.

The Great Sand Sea, one of three sand seas in the Sahara Desert, is a vast landscape of golden dunes that are now permanently sketched in my mind. One of Egypt’s less-traveled tourist attractions, it was exactly the desert adventure I’d wanted out of the Sahara.

For more details on Egypt on the Great Sand Sea check out these sites: