Saint or Hypocrite? Technology Can Confirm the Real Aamir Liaquat 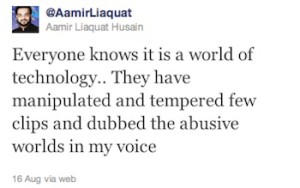 “Everyone knows it is a world of technology. They have manipulated and tempered [sic] few clips and dubbed the abusive worlds [sic] in my voice,” tweeted Dr Aamir Liaquat in the aftermath of the recent video scandal (see the video below) that quickly went viral this past weekend. The video consists of several unflattering clips of the TV personality filming his show and reveals what many believe is Liaquat’s “true face.”

Dr Aamir Liaquat’s official bio states that he is a renowned Islamic scholar, the executive director of television channel ARY Digital and the managing director of its Islamic channel, QTV. He was the host of “Aalim Online” on GEO TV and currently hosts a religious show on ARY. Drama is not new to Liaquat. He has been at the centre of multiple controversies, from getting a PhD in 20 days to arousing sectarian strife — including, but not limited to, a statement that led to the killing of three prominent Ahmadis in 2008 and involved abusive language targeted at Islamic holy personages.

In the newly surfaced video, the publicly modest-looking Islamic scholar can be seen using abusive and derisive language in recorded outtakes of his programme. He is shown swearing, casually and routinely letting off the vernacular for “mother fu**er”, “pimp” and “sister fu**er,” etc., during conversations. The “Aalim” also appears to be big on Bollywood, for which he has quite a varied taste (“Ghalib movie dekhi hai?”). In one clip, he tries to remember a certain actor from a movie song who he says is notorious for rape scenes.

The video gets particularly opprobrious and the histrionic Liaquat appears to take a deeper plunge into his sea of disgust when he shows cold insensitivity to a female caller’s question on “rape and suicide.” Anyone having the slightest bit of dignity and shame wouldn’t burst into a guffaw like that. The video also confirms that at least some calls in his former GEO programme were planted.

Liaquat has claimed that the tape is doctored, and he is frantically pointing fingers in every direction. He initially blamed his previous employer (GEO TV), then said it was a conspiracy by those who did not want him to “spread the true essence of Islam in Ramazan,” and has lately also implicated groups that he said were against the finality of prophethood. But what most people are thinking about is not blame: it is whether, other than Liaquat’s confused berserk behaviour, there is any evidence the tape is genuine.

As soon as the video surfaced on YouTube, it was removed by GEO TV, who stating copyright claims. Quick they were, but late by modern standards. The video had been downloaded and was re-uploaded a gazillion times to multiple video-hosting sites. Interestingly, GEO kept pulling down the videos one after another in a hurried frenzy.

They failed, but, in the process, furnished strong proof of the video’s authenticity. The tape’s credibility was further improved when the Aalim later verified that the clips were indeed taken from GEO’s archives. If it was truly GEO that had planned Liaquat’s defamation, the hot pursuit of the videos was indeed smartly scripted. 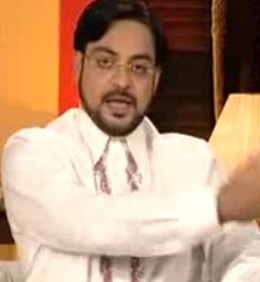 No one seems to buy Liaquat’s “dubbed” argument. An expert who wishes to remain anonymous stated that he believed the voice was indeed Liaquat’s and that no level of expertise could manoeuvre the video to construct perfect synchrony between his hands (e.g. clapping) and lip movements and the words he uttered. There seems to be a very slight audio lag in later uploads of the tape, but the expert consulted said this was not surprising, given the repeated cycles of downloading and uploading the digital video has endured.

But if it indeed was dubbed, nothing short of the release of the ‘original’ untouched version of the clips would serve as proof of Liaquat’s truth and innocence. With such significant humiliation, Liaquat could very easily take the legal recourse of having the ‘originals’ released. It would be interesting to see what he was actually saying while clapping his hands if not singing “hai agar dushman, dushman.” It would be of equal interest to see what he was actually saying when he made those crude gestures at 1:57 and 2:11 minute marks. Did he actually laugh at the woman’s question or was that cackle overdubbed? If Liaquat is in the right, he shouldn’t desist from providing us with these answers.

The Aalim denies outright the tape’s authenticity and says anti-Islam elements are behind its release. Like Hamid Mir did in the recent past, Liaquat might succeed by exploiting the illiteracy and naivete of his listeners. The lack of accountability will only help. After all, his fake degree and his hate speech went unchecked in the past. However, in this world of technology, it is impossible for him to keep functioning for long. Unless he presents the ‘originals’ Liaquat will definitely lose most of his supporters on social media sites and many of the more discerning in Pakistani television audiences.

Liaquat is either a saint or a hypocrite. In the interests of accountability, we must allow Liaquat the opportunity to prove his innocence (one more time). If he is blameless, whoever tailored the “fake” videos must be reprimanded (or made head of the Pakistani filmmaking industry). Ruining someone’s character is surely a serious crime. However, if Liaquat is hesitant to come forward with the ‘originals,’ he should be taken to account for the deception of millions on television and for continued hypocrisy in the name of faith. If any television channels continue to host him still, they should also be taken to task for fraudulent conduct and boycotted in protest. What will Liaquat say next? Was he cloned for the tape? It’s a world of technology, after all.