Organising a public protest is one way of registering a complaint with those who otherwise cannot be easily or directly approached: parliamentarians, judges, the prime minister or the president. And that is what was done yesterday, August 26. The who’s who of Karachi including activists, journalists and TV personalities, among other civil society members, gathered at the Arts Council to express their outrage at a mob murder of two teenage brothers, Muneeb and Mughees Butt, in Sialkot, and to demand the relevant authorities to take action.

That relevant authority, however, was not Shehla Raza (deputy speaker of the Sindh Assembly) who had come voluntarily to share her two bits. Yes, she went a little off track — way off track perhaps — and ended up speaking about the government’s efforts to help flood victims. But is it reasonable to have her head for it?

As she departed — to receive more flood victims coming into the city, she claimed — a large part of the audience followed suit, chanting slogans. They were instigated by comments from Bushra Ansari at the podium, commanding Shehla Raza to return and listen to all their concerns and demands. Forced to come back and address the crowd a second time, MPA Raza condemned the incident, but asked what else could she do?

On the Facebook page advertising the event, the organisers had put out a special request to the participants:

“This is a mourning protest by CIVIL SOCIETY. We will begin with a minute of silence in memory of [the] Butt brothers. We must show restraint and tolerance and decorum in our words and actions. No violent or foul language. No violent demands. We must ask for Rule of Law and thorough and transparent legal procedure. We must ask for Speedy Justice. We must assure the family of the deceased brothers [of] our support till they get justice. We must promise ourselves that this is not the last time we are raising our collective voice against barbarianism, lawlessness, brutality and Police high-handedness; this is just the beginning. We must vow that we will stand up against injustice done to anyone and everyone till the time we get our society rid of such malaise. Hope you all agree and join hands in establishing peace and harmony in Pakistan.”

“Civil society killed those boys,” rang a voice from the podium. And civil society made a debacle of itself at the Arts Council in Karachi. 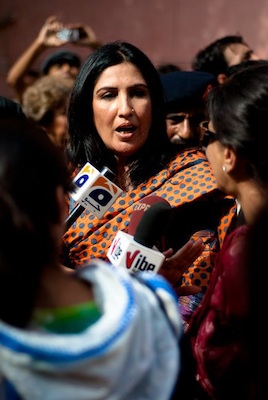 MPA Shehla Raza speaks to the press at the protest on August 26, 2010. Photo: Ahmed Shajee Aijazi

Civil society prides itself as being the protector of democracy and human rights; it boasts that it is educated and aware. Clearly it is deluding itself. If it were really aware, would it have needed reminding of how to behave, to stop engaging in screaming matches with politicians (the likes for which it takes the media to task) and to get the facts right: it was not the mandate of Shehla Raza (who is neither a federal minister, nor a parliamentarian from Sialkot or the Punjab) to do anything more than offer words. And surely words are not enough.

At least the organisers and speakers kept their head. Thank you Ayesha Tammy Haq for reminding the overzealous crowd what they were there for in the first place, and that among others, it is the chief justice of Pakistan’s mandate to address the issue at hand. Thank you Mohsin Sayeed for being “rude” enough in your own words to ask the crowd to settle and participate constructively in the programme, or to simply leave if their aim was to get themselves on TV.

Such behaviour brings disrepute to other members of civil society who unlike some, are acting constructively. One such step was to post letters to the chief justice. Volunteers at the event distributed a statement that each audience member signed and returned to desks set up at the venue. These letters were then stamped (with postage stickers) and mailed out to the chief justice. That is one way of making a difference — in a civilised way.

While writing hundreds of letters to the CJ is one way of perhaps securing justice for the two boys, there still could be several others. A brainstorming session could have been held. Ideas could have been pooled, resources identified, expertise offered: a plan for collective and constructive action could have been devised. 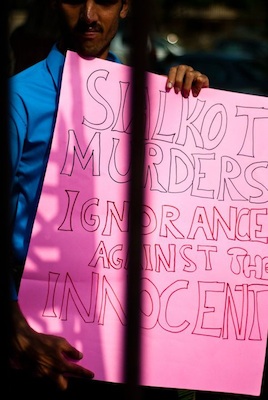 A protester holds up a sign in Karachi against the public beating and murders of two brothers. Photo: Ahmed Shajee Aijazi

The podium was open to speakers, anybody who wanted to say something — and there were people saying things that made sense, if only they could be heard over the chanting. The crowd chose, instead, to disperse and make its way to the Press Club where it stood for some time in front of media men to chant some more and hold up banners.

Flash protests are not enough if things need to change in this country. One day for Kainat Soomro and another for the girls who were buried alive in Balochistan will not achieve justice. Let’s be angry and unforgiving about the atrocities committed but let’s also channel that outrage to effect change by resolving to take a stand on issues, not only by appearing once at a protest but also by seeing matters through, resting only when justice is meted out.

As one speaker rightly pointed out, the murder of the young brothers in Sialkot is not the first incident of its kind, and it won’t be the last. When gunpoint robberies became a common occurrence, the usual piece of advice was: “Don’t resist, just give them what they ask for.” But then the tide changed. “Run them over if you have to,” some argued. “Shoot them dead, if you have a gun.” It wasn’t very long ago that Karachi’s Defence area was terrorised by the white Corolla criminals who looted and raped victims. The public consensus then was to shoot the accused if he got out on bail — because he surely would with his connections.

Justice in courts or by law-enforcers is not something the public has come to expect in Pakistan, especially when the law-enforcers themselves are the law-breakers. Take for instance the recent case where the police stopped a couple on their way home, forced money out of them, illegally detained them at the police station and raped the woman.

Vigilante justice does not stem from nowhere. There are countless families around the country whose members have been victims of dacoity, torture, extortion and rape. How many murders have been committed, whether to settle a score or to snatch a mobile phone? And in how many of these cases have the offenders been punished, much less apprehended?

People are sick of being looted, raped, extorted, murdered. They are sick of reaching out for help and not getting it. So, they take matters into their own hands.

To stop this from happening, at least one example must be set where justice is served.

To see more pictures of the protest by Ahmed Shajee Aijazi, click here.

To vote in our poll about the Sialkot murders, scroll down and have your say, or click here to leave a comment.

What segment of our society do you most blame for the public beating and murder of two boys in Sialkot on August 15?