Textured terrains, mountains among the mist, shops reflecting clear blue skies, cherry blossoms, apricot trees casting shadows over the rugged landscape, and people from the Hunza Valley itself — it almost felt like I was there, standing in the valley, taking in the beauty of this paradise on earth, rather than seeing it through the eyes of the photographers whose work was displayed at the Lighthouse Photography exhibit in Karachi.

In 2011, while still an architecture student at the Indus Valley School of Art and Architecture, Ali Khurshid founded Lighthouse Photography by converting a small portion of his house into an office. When asked about team dynamics he said, “Most of the people who have lasted are the ones who were like blank canvases when they first came. Always willing to learn — and with nothing to unlearn either. Those are the ones that I teach best.”

This was Ali‘s fifth trip to the Hunza Valley, along with his wife, Noorulain Ali, and Haseeb Amjad, both of whom are also photographers. When asked why Hunza of all destinations, Ali says: “It has to be the people; Hunza has a 100 per cent literacy rate due to the efforts of the Aga Khan in the education sector. Also, the people love Karachiites, and one of the reasons is that the majority of Hunzakuts pursue higher education at Karachi University.

“There is also an unbelievable European style cafÃ© called CafÃ© de Hunza. The owner is a local who studied in Germany and serves 20 different varieties of coffee. But the main reason people go to him is because of his world-famous Hunza Walnut Cake. This, along with the scenic view from the cafÃ© and the fact that all the tourists frequent this place in the morning, makes a visit to the cafÃ© the most unreal experience. I have lost count of the number of friends I have made while sitting there using the free wifi. And even though the cafÃ© is small, it also houses a bookshop!” 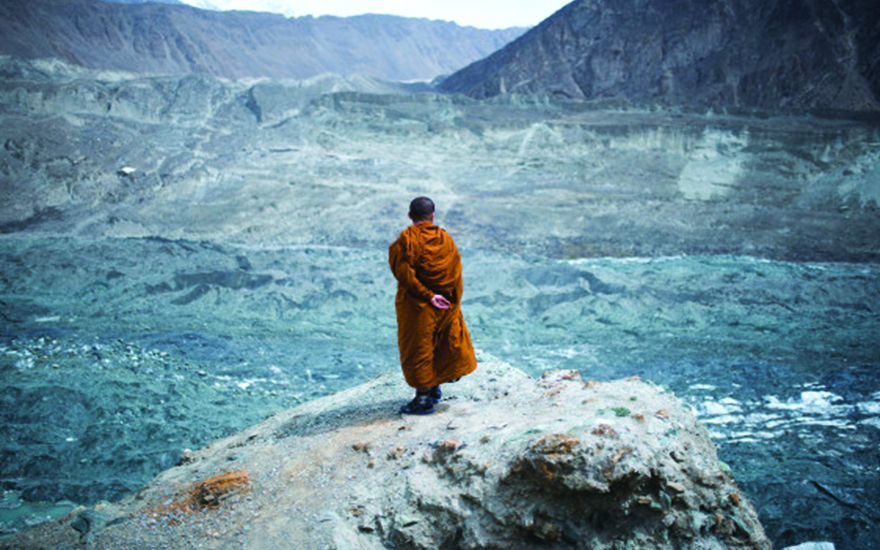 The snaps taken during this trip were all about the three photographers’ personal experiences and they aimed for compositions that weren’t the usual calendar-like clichÃ©s. Instead they captured the essence of the valley and what they loved about it.

There is a story behind many of the photographs. One of them is of men standing on two boats trying to tie them together, with a lake and mountains in the background. The lake was previously a village, but it was destroyed by a flood — villagers now use the flooded area as a means of transportation. They join two boats together and transport trucks on them, thus using the natural disaster that destroyed their homes as a way of earning revenue.

Among my personal favourites is an image of a Thai monk, wrapped in an orange robe, facing a vast stretch of land standing atop a mountain — a single being amidst the massive landscape. The stark contrast of the deep orange robe against the cool blue sky and light grey hues of the terrain, makes the image extremely powerful. 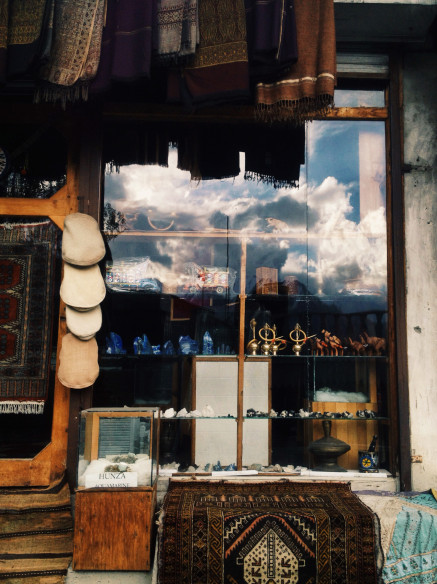 Another interesting photograph is of a shop with little objects resting on the window sill, rugs lying outside and a clear blue sky reflected in the window — so simple and yet so mesmerising.

I was awestruck when I found out that the Milky Way could be seen from Hunza, and while the human eye can only see it in black and white, the camera captured its myriad colours. A shot of it was taken from the rest house terrace in Sost and, according to the photographer, it took over an hour to capture.

Ali plans on holding more exhibitions similar to this one in the future, that focus more on his team’s personal experiences. He also wants to move away from the mode of taking photographs that just look “pretty.”