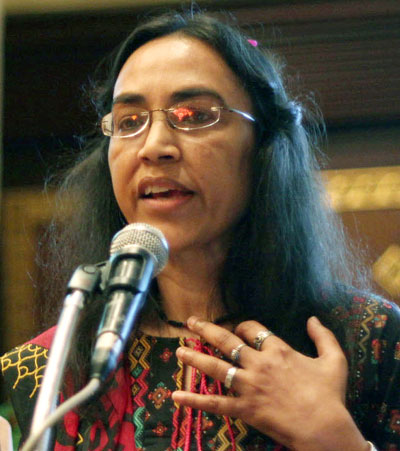 The report of the Joint Investigation Team (JIT) in the Perween Rehman murder case has vindicated all those who had disagreed with the official version of linking the murder to either the militants of Tehreek-e-Taliban Pakistan (TTP), or termed it an act perpetrated by small-time gangsters affiliated with the Awami National Party (ANP). The JIT report instead, states that the murder was the result of a bigger conspiracy of the land mafias who were not happy with Orangi Pilot Project (OPP) Director, Perween Rehman’s efforts for the regularisation of the informal settlements or goths and transferring ownership to the original inhabitants of the land.

The report has categorically refuted all the theories declaring the murder as an act of personal vendetta by one of the prime accused, Rahim Swati, and his accomplices, who are in police custody and have confessed to hatching a plot to kill Perween Rehman with the help of TTP militants. Also, another theory doing the rounds of the alleged involvement of the water hydrant mafias was also declared far-fetched and contrary to  facts.

The most interesting aspect of the investigations by the JIT is their questioning the role of some of the police officials involved in the investigations in the initial phase, who, it is alleged, manipulated the evidence and tried their best to change the direction of inquiry.

Perween Rehman was killed on March 13, 2013. The very next day the police claimed to have killed a militant, Qari Bilal Mehsud, in a raid in the Manghopir area, and seized a 9 mm pistol from his possession. Deputy Inspector General (DIG) Javed Alam Odho talked to the press and declared Bilal to be the murderer of Perween Rehman. The empty bullet casings supposedly recovered from the murder spot and the pistol recovered from Qari Bilal were sent to the forensic laboratory on March 15, two days after Perween’s murder. The forensic report backed up the claim made by the police since the pistol and the bullet casings matched and the case was declared solved and closed.

However, in September 2013, the Human Rights Commission of Pakistan (HRCP), the Pakistan Institute of Labour Education and Research (PILER) and other members of civil society groups filed a petition, co-signed by 8000 people all over the world, including professionals working for the World Bank, the Asian Development Bank and UN agencies. The petitioners expressed dissatisfaction over the way the police investigations had been carried out and said that the conclusions were drawn in a flimsy and hasty manner.

The Supreme Court of Pakistan accepted the petition and reopened the case. Hearings started in January 2014 after sections of the Anti Terrorism Act were incorporated in the original First Information Report (FIR) on the direction of the Supreme Court, which ordered a judicial inquiry of the murder. The District and Sessions Judge West Karachi, Ghulam Mustafa Memon, conducted the inquiry and submitted a report in which he termed the police attitude as apathetic, indifferent and casual while dealing with cases of heinous offences, in particular the murder of Perween Rehman. Justice Memon recommended reinvestigation of Perween Rehman’s murder, the attempted murder of Saleemuddin, another OPP official, the police encounter with Qari Bilal and recovery of the pistol and bullet casings by some efficient, honest, and independent police officer.

As the pressure and criticism mounted over the clumsiness with which the police handled the case, the latter decided to add more twists to the murder plot by bringing in more characters: local thugs like Rahim Swati, Ayaz Swati, Ahmed Khan alias Pappu Kashimir, Amjad Hussain, and Imran Hussain — all of whom are now charged with Perween’s murder in the Anti-Terrorism Court No 13. According to the police some of the accused, during interrogations, confessed to their involvement in the crime alleging that Rahim Swati of the ANP hired Taliban militants Moosa (an unknown figure) and Mehfoozullah alias Bhaloo (a local drug peddler who was killed by the CTD in September 2014) to kill the OPP head, Perween Rahman.

The JIT report has countered this claim: “The murder of Perween Rehman went far beyond the immediate issues and threats that were recorded by the (police) investigation team and ascribed to the suspects who are currently under arrest and facing trial in this case. This was not to cause a doubt in the exceptional efforts of the investigation team, whose investigations were not contradicted by the findings of the JIT. The JIT simply wished to highlight the fact (that) while the individuals under arrest were most likely to have been involved in the murder, there had to be a wider motive behind Ms Rehman’s killing, which was related to the work done by her, since that work has rattled and impacted upon the interests of many mafias that were operating in Karachi. “

The JIT members have, based on their extensive experience in terrorism-related cases, cast a doubt over the involvement of the TTP, and found it unlikely that she had been killed by them over ideological differences. They have pointed to the TTP tendency of capitalising on their notoriety by claiming such high profile murders but, surprisingly, they didn’t claim this particular one. However, the JIT did not rule out the possibility of the involvement of some low-level militants who might have committed the crime out of self interest, blood money etc.

One possible motive for the TTP to murder Perween Rehman could have been her report on the water hydrant mafias; the TTP had built up a huge business empire out of this illegal trade and were the major beneficiaries. However, they were not the only ones. Apart from the TTP many other political parties were also minting money from this  illegal trade. What goes against this murder theory is that the OPP water hydrant report came out in February 2008 and it seems unlikely that the TTP would react to it years later.

The JIT report has gone into great detail about the work of the OPP, led by Ms Rehman, regarding the regularisation of the informal settlements or goths, spread across the Super Highway and Gadap Town. These lands were virtual gold mines for the land grabbers as they were able to acquire them easily with the help of government officials and partners in political parties and forcibly evacuate the people living there with the connivance of corrupt police officials. The regularisation work of the land in some of these areas by the OPP had, however, made the forcible acquisition of these lands more difficult for the land grabbers. As the dwellers of these informal settlements were being accorded ownership rights to the land that they and their forefathers had lived on for generations, they were in a better position to negotiate  prices. Hence, these politically-backed mafias found it necessary to stop the regularisation process.

The JIT report says that subsequently, a conspiracy was hatched and the plan was perpetrated through local thugs by killing Perween Rehman, attacking other OPP members, and forcing them to stop their work. The police officials, who were either complicit in the crime or plain inefficient caused damage to the whole investigation by manipulating evidence and twisting facts.

The JIT report concludes by recommending further examination of the role played by police officials in closing the case in a hasty manner. Based on the statements (to the JIT) by the police officials who put the blame on sub-inspector Moeed for manoeuvering the case in a certain direction, and passing wrong information to the senior officials, the JIT report has recommended that SI Moeed should be investigated. They have also termed the act of SSP Asif Aijaz Sheikh, his boss, who did not bother to verify the facts presented to him by his subordinates, as a failure of command.

DIG Odho who held the first press conference claiming to have killed Qari Bilal, Perween Rehman’s alleged murderer, also put the blame on SSP Asif Aijaz Sheikh for misleading him. According to a reliable source, Odho, after his transfer from the post, wrote a letter emphasising the need to reopen the investigation into the Rehman murder case to set the record straight.

The JIT report laments the fact that the investigation of the case started years after the murder which makes it hard to gather technical evidence that would have assisted the probe.