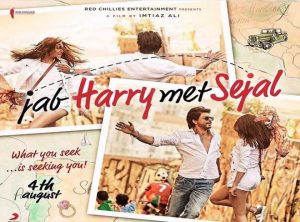 Imtiaz Ali’s Jab Harry Met Sejal is a desperate attempt to hold on to Ali’s trope of the ‘journey’ that his characters undertake to search for themselves. The casting of Shahrukh Khan, the king of Bollywood romance, becomes problematic when Ali tries to force a ‘searching for himself’ narrative onto a figure with whom the audience is already too familiar. While the audience has admired both Khan and Ali’s independent bodies of work, the awkward attempt to pair their hallmark genres presents conflicting situations throughout the film that confuse the viewer.

The film is about a young woman, Sejal (Anushka Sharma), who loses her engagement ring and so forces Harry (Shahrukh Khan) to help her find it. The ‘ring’, of course, serves as a metaphor for what is lacking in both Sejal and Harry’s lives. The duo travels across Europe to find the said ring and in the process discover their love for each other.

While the plot is overdeveloped, the characters and the story remain underdeveloped. Harry’s backstory is hinted at throughout the film, with flashbacks from his past in classic Imtiaz Ali style. Khan plays the role of a womanizer, who is running away from a stagnant lifestyle but at the same time is troubled within and looking for companionship. Though the film introduces the internal crisis Harry is struggling with, it is never developed. Instead, Ali decides to devote fifteen minutes to an underground goon called Gas in an attempt at comic relief.  Unfortunately, it merely goes down as a weak attempt at toilet humour.

Ali repeatedly throws hooks to his fanbase by adding extratextual references from his previous films. For instance, there are obvious references to the songs “Mein Kya Hoon” from Love Aaj Kal and “Matargashti” from Tamasha. The title itself is a play on his previously acclaimed film Jab We Met. These snippets keep Ali’s voice alive throughout the narrative, but as a whole this film remains out of place in his larger body of work.

In the same way, we see glimpses of Shahrukh Khan as Raj, his immortal romantic persona. Ali even tries to incorporate the ultimate test of a woman’s love: whether or not she turns around to look at the hero, more commonly known as the “Palat” (turn around) test. This particular scene is set at the airport and  prompts major Love Aaj Kal flashbacks due to the similar mise en scene, not to mention the classic scene from Shahrukh Khan’s evergreen Dilwale Dulhaniya Le Jayenge. In this film Harry watches Sejal walk away until she finally turns around and looks at him intensely. While both scenes from the earlier films are individual cinematic masterpieces, the marriage of the two takes away from the grandeur of each and leaves us with a goodbye scene, the loose ends of which Ali refrains from tying for the rest of the film.

In terms of screen time, Anushka Sharma is equally important to the film but the motives driving her character remain largely unexplained which makes it very hard to like her. Khan and Sharma’s chemistry is great throughout the film, despite the lack of any narrative explanation as to why they are attracted to each other. Unfortunately, this is not enough to redeem the weak story line.

The film had a lot of untapped areas and had Ali explored any one of those, the result would have been much meatier and more engaging. Individual sequences of the film were humorous and entertaining but as a whole it made little sense. The film can be summed up as an amalgamation of Ali and Khan’s previous work along with some verbal comedy.

The poster of the film offers the tagline “what you seek is seeking you”. Unfortunately, it fails to uphold that claim for fans who were seeking that distinctive Imtiaz Ali experience.