In honour of Hollywood during Oscars season, Bina Khan shares the stylish movies that have created magical worlds she has never been able to forget.

When a film offers me the opportunity to escape in to a different world, I jump. And if the world is convincing, compelling and layered enough, I will revisit it — again and again. The result: I can quote reams of dialogue from various films, and I take great pleasure in trying to notice all of the crazy details that go in to creating each marvellous shot.

When it comes to set, make-up and costume design, we often don’t notice all of the detail and nuance that goes in to making a shot feel full. A few years ago, a Chanel fragrance advertisement was shot with Keira Knightley. It was decided to shoot it in Coco Chanel’s own apartment. However, seeing as the wear and tear of equipment and people would probably damage the apartment and realising that many long shots would be impossible in a small space like that, artisans were hired to recreate sections of Madam’s apartment for the shoot, down to the most minute art-deco detail. Spectacular!

This is a huge part of the magic of film. Without this support, the performances of the actors would still be fabulous (like in Dogville, which I love), but you could not dive headfirst and unthinkingly in to the world to which the director wants to take you.

Obviously any film with Audrey Hepburn (and therefore Givenchy) is going to have clothes to die for. The story centres around a tomboyish chauffeur’s daughter who gets sent to Paris for school only to return and, in a perfectly swanlike manner, wreak havoc on the hearts of the men around her. And since these men are loaded, we have the classic Cinderella story, 50s style. The clothes and sets are beyond elegant, the situations hysterical and the love story is, well, lovely!

Has there ever been anyone more perfect than Grace Kelly? She embodies the name that her parents, with apparently amazing prescience, chose for her. Her critics (surely there must be very few) have had one complaint: she was an ice queen. Well, clearly they have not seen her in this film. Cary Grant and Grace Kelly light up the screen with such an amazingly raw chemistry that you find yourself a little shocked. The plot, clothes, hair, make-up and location all add up to an amazingly fun, sexy and, of course, stylish romp. 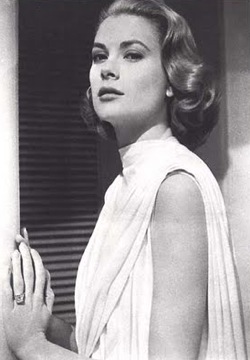 With a classic haves-and-have not angle, this delightful love triangle (or pentagon, since there are five players) brings together a very funny Grace Kelly (a have), Bing Crosby (another have) and Frank Sinatra (a have not). I remember watching this as a child and being lost in admiration at the amazing swimming toga that Grace Kelly removes near the pool, to reveal an equally elegant costume on an even more elegant body. The highlight of the movie, though, is the progressively more and more drunk rendition of “Did you evah” performed by Frank and Bing, in what I always thought was the true romance of the film.

If you have somehow missed this film you have missed out on one of the funniest films of all time. Jack Lemmon in a dress. And lipstick. Need I say more?

I will say, though, that this is Marilyn Monroe at her slightly too chubby best (the scene on the beach with Shell Oil Junior makes me crack up every time). Other than the first 20 minutes, which are a not a laugh a minute, this movie will have you in stitches.

This is one of the scariest movies of all time. The psychological build-up is so intense that I literally get antsy when I watch it. This movie uses costume and set to such amazing effect: the baby doll dresses only serve to underscore Rosemary’s intense child like vulnerability and the apartment has a diabolic character all of its own. The decision to swathe the crib in black satin and hang an upside down crucifix in front of it just hints at the horror. Always way scarier than spelling it out. 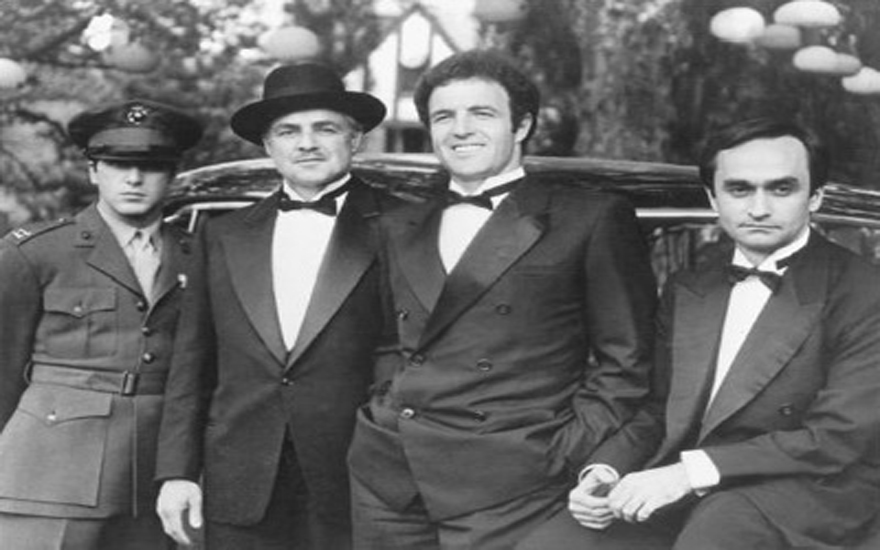 The Corleone Family from The Godfather. Source: jdmfilmreviews.com

This is the movie to end all movies. The quotes are endless: “Luca Brasi sleeps with the fishes”; “Leave the Gun. Take the Cannoli”; “I am going to make him an offer he can’t refuse”; “Look at what they have done to my boy. They have massacred my boy….”; “Maaaanday, Tuesday, Thorsday.” Perhaps, the most quotable film of all time, the most watchable film of all time. There is not an extra moment, every shot is pure perfection, each performance is mind blowing.

We know that the movie could only get made after the mob signed off on it. We also know that loads of the extras and some of the smaller roles are played by actual mobsters (Luca Brasi rehearsing his speech “On this the day of your daughter’s wedding . . . and may their first child be a masculine child . . . ” is footage of the first-time actor and otherwise mobster actually rehearsing for his scene with Brando and was filmed without his knowledge). The magic and ruthlessness surrounding this film is, of course, legendary.

The most magical thing of all? Many of the main roles were performed by non-Italians; yet they have come to represent quintessential American Italian-ness to the whole world.

Not to be pretentious, or to pretend that I am some super knowledgeable film buff, but I watched this film with my husband and was just plain smitten. A film about the filming of a film, it’s a love letter to cinema, lovingly portraying the temporary families created on a film set and exposing all the tricks of the trade: it is a nostalgic, whimsical peek behind the scenes. And if you have never seen a young Jacqueline Bisset, you will be shocked at how closely Elizabeth Hurley resembles her. If you watch any one of these films, this should be the first on your list, seeing as it is a Truffaut. In fact why wait, here is a glimpse of his tender love letter to cinema:

This film aims to be the ultimate girl-power movie but it ends up issuing a rather mixed message. The heroine needs the help of all the men around her to get ahead, she has to lie and scheme to do so and the successful woman boss is portrayed as pure evil. However, this is still a really fun makeover movie (there is a black dress that I used to just dream about), and a young, charming Harrison Ford certainly is easy on the eye. It is New York at its most glorious. Good fun rating: Five stars!

If you are looking for an orgiastic visual feast then look no further. Dangerous Liaisons is sublimely beautiful, beautifully acted (barring a very young and even then wooden Keanu Reaves), fantastically well written and just plain sexy. Glenn Close and John Malkovich set the screen on fire in the lead roles, and with a supporting cast comprising Uma Thurman and Michelle Pfeiffer you are hard pushed to decide who is more beautiful than the other. Visually you can see where Sofia Coppola’s starting point was for Marie Antoinette, though she famously asked her costume designer to base the colour palette of her movie on a plate of LadurÃ©e macaroons. Dangerous Liaisons is a deviant, cruel, diabolical love story that takes place amidst some of the most elaborate sets and in the most gorgeous costumes you can imagine. The last scene with Glen Close is one of the more frightening things I have seen outside of a horror film. 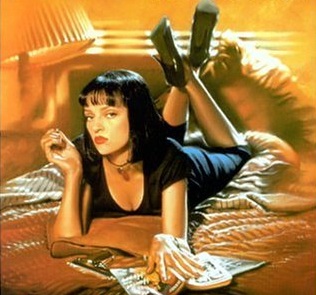 Pulp Fiction (with a pinch of Scarface)

Some of you may really object to me putting these in to the same category but I always feel like they are of a similar mood. Not to deny Tarantino’s complete genius in Pulp Fiction and I realise thatScarface should be a bit of a guilty pleasure (“Say khello to my leeetle fraind!”) but I think that Mrs. Mia Wallace is, if not a direct homage, an homage nonetheless to the kind of mobster heroine played by Michelle Pfeiffer. They certainly smoke in the same way, though Mia’s “God Damn!” and subsequent overdose take her character to a much scarier place. I have to admit that unoriginally like most people of my generation, Pulp Fiction is certainly a film that gives me deep joy: from the dialogue and structure to the list of actors and the bizarre situations, it’s Tarantino’s finest hour. Plus Travolta on a dance floor, for once matched by the charming bewigged craziness of Thurman, is a moment of pure cinema gold — as is most of the film.

As if! This movie became iconic in its representation of the new P.Y.T. It played around with the images of rich, young spoiled kids, and so many trends can be traced directly back to Cher and co. From Gossip Girl to the OC and from Micha Barton to Paris Hilton, Clueless left its mark. The movie introduced to a new generation a designer-clad, cause-espousing, calorie-counting ultra-privileged teen. Alicia Silverstone has never been funnier (“Billy Holiday? Yeah, I love him!”) and her hair was so lustrous that it had character all its own! This film also saw the debut of Brittany Murphy, who ironically fell to the perils of being young in Hollywood. 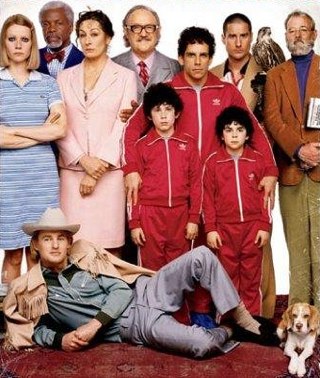 When I think back to any Wes Anderson film, I am left very strongly with a colour memory. WithZissou I remember coral and aqua, with the awfulDarjeeling Limited I remember saffron yellow and with Tenenbaums I think of a very ‘70s palette of dirty green, orange and maroon. I also think of a childlike bob, tweed and deeply darkened eyes. It’s a visual bonanza that is a genre unto itself; I often describe things as “very Royal Tenenbaums.” Some people find this film a little self-indulgent, but I think that the Academy Award nominated screenplay by Anderson and Owen Wilson (made all the more poignant by Wilson’s own suicide attempt that seemed quite similar to the one in the film) was touching and kept me interested. One writer in Variety called it a  “depressive comedy” and Roger Ebert praised it as being “as richly conceived as the novel it pretends to be.” Rich is definitely a word that comes to mind.

Arguably a film with one of the greatest reveals of all time (even better than The Usual Suspects reveal that made me drop my mental coffee cup), I think we were all rooting for him to take the red pill. Another film worth quoting to death (“You think that’s air your breathing? Hmm!”), and this time Keanu’s wooden acting worked in his favour. A symphony of green, grey, black and white, the set design, costume design and art design of the film was absolutely spectacular. From the martial arts pyjamas to the patent-leather duster coats and boots, every item of clothing helped to further the perception of unreality, in that they seemed to be dressed with the knowledge of their own unreality while in the Matrix. No one was wearing sweat pants on Morpheus’ crew! Particularly interesting throughout the film is the use of sunglasses, not only as a reflection of their characters (like the Ã¼ber-cool Morpheus’ press-on kind that won’t fall off because he knows that they won’t) but also as a tool cinematically. We see Neo being offered the blue and red pills as a reflection in Morpheus’ glasses in one of the film’s most gripping moments. Obviously the film is loaded with philosophical references and questions, but visually there are messages all over the place too.