Memories of an Indo-Pak Cricket Match

It’s been more than a month now since things boiled over with excitement in Mohali, but just because life has settled down and returned to normal doesn’t mean Majid Maqbool can forget the fiery emotional display put on by Indians during the ICC World Cup match against archrivals Pakistan. Of course, not everyone was so thrilled. 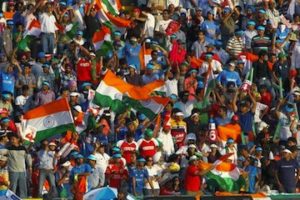 Indians celebrate their win over Pakistan in the ICC World Cup semi-final in March 2011. Photo: PTI / The Hindu

Every time a Pakistani wicket fell in the Indo-Pak world cup semi-final match on March 30, slogans erupted from the crowd in rapturous waves of sound. In Delhi’s Lajpat Nagar area, the spectators had assembled in a park to watch the match on a big screen. A slight possibility of a Pakistani batsman getting out, a ball missed, or a run scored by the Indian batsmen would stir up loud slogans of “Bharat mata ki, jai!” (“Victory for Mother India”) immediately followed by much louder shouts of “Pakistan, Murdabad!” (“Death to Pakistan”).

In the second inning run chase, Pakistani batsmen followed each other quickly back to the pavilion. As it became clear that India was winning the match (and even much before that), the Indian tricolours came fluttering out on the streets. Young men, recklessly driving their bikes, furiously waved their Indian flags. Curiously, the boys would make stops near the Afghan restaurants and bakeries that have come to populate Lajpat Nagar locality. In the neighbourhood, the Indo-Pak semi-final match had whipped up a frenzy. The Afghans though, uninterested in the match, looked rather amused by the euphoria surrounding them. The boys shouted pro-India slogans in their faces and continued to aggressively wave their flags. The Afghan men would respond to the provocation with friendly smiles. After a few rounds of pro-India and anti-Pak slogans, combined with zealous flag-waving, the young men would speed away to join more bikers further down the road. The slogans would amplify into a mixed frenzy of victory shouts from balconies, whistles from passers-by and honking horns of vehicles.

“[email protected]!%&#*d Pakistani!” guffawed a shopkeeper, making a comment about Afghans who have come to earn their livelihood in Lajpat Nagar. “Hindustan ki roti khatay hain…” Interestingly, the Afghans of the locality happen to be his regular customers. And when there were no Afghan customers near the shop, he went on to say a few more unpleasant things about them to his fellow Indian customers, who seemed to agree. The shopkeeper had doubts about the loyalty of Afghans in the locality. He was certain that the Afghans secretly cheered for a win by Pakistan. However, the reality, at least in Lajpat Nagar, contradicted his claims. The Afghan bakers, as usual, sold hot Afghani naans to Indian and Afghani customers who lined up in front of them. The restaurant staff flashed smiles to the charged up boys on bikes and then returned to their work. They didn’t cheer for the Pakistan team. In fact, the Indo-Pak semi-final clash did not excite them at all. The cricket world cup was not their thing.

Meanwhile, my friends and I assembled at a Kashmiri friend’s place in a small room of a rented flat. Away from home and being alone, there’s no fun watching an Indo-Pak cricket match. As such, we decided on watching it together.

As the second innings began and Pakistani wickets began to fall, one of my Kashmiri friends complained of breathlessness. Another friend bathed twice, then sat shirtless to watch the match. And another friend, unable to sit quiet for more than a few minutes, would take frequent and impatient walks to the balcony, only to come back after puffing on a few cigarettes.

The Pakistani wickets kept falling at regular intervals. The celebrations outside our balcony gained momentum. As more wickets fell, the slogans grew louder then faded out under the din of firecrackers — soon the air became flavoured by their smoke. Drumbeats gained tempo. Free drinks were passed around. The traffic jammed and overjoyed drivers honked horns. Seeing an imminent Indian victory, people went berserk, hugging everyone on the streets (except the Afghans, of course).

As the Pakistani bowlers came out to bat, a dejected friend asked for the remote control. “I want to watch a movie now,” he pleaded, wanting to switch over to some entertainment channel. A couple more Pakistani wickets fell, he quietly left for his own rented flat, muttering a mouthful of his most choice abuses in Kashmiri — all reserved for the Pakistan team.

Back home, except for the Indian troops, everyone was expecting the Pakistan cricket team to win. There was a curfew-like situation as the match began. And after India won the match, the Indian news channels kept going live to Kashmir — only to show celebrations inside the military camps. No footage of ‘celebrations’ on the streets was aired. Visuals of CRPF and Army troopers cheering for their nation near bunkers and inside military camps were repeatedly shown on news channels. These stations convincingly passed them off as ‘regular people.’ In the lead up to the match, the channels had again showed people (read: CRPF and Army personnel) praying for the Indian win.

“Now, let’s go live to our correspondent in Kashmir to show you the celebrations of people,” the anchors of the leading news channels announced with delight after India qualified for the final. Their correspondents, waiting inside the military camps with mikes and cameras, would then go on to show the festivities playing out. Many CRPF troops, including wives of some, would gather in front of the camera, distribute sweets and express immense joy for the Indian win. Then all of them broke into an uninhibited victory dance in front of the camera.

Sometimes, though, a moment of truth flashes unintentionally on the Indian news channels. And truth reveals itself inadvertently and at the rarest of places. On one of the leading news channel’s coverage of “Kashmir celebrates Indian victory,” the camera came to briefly rest on some young Kashmiri men in plain clothes who also happened to be inside the military camp. One of the men who came into view was tapping the keys of a piano to complement the celebrations of the troops. But his countenance spoke of his unwilling participation in the celebrations of the Indian troops. A few more Kashmiri men in plain clothes came into view as well — all of them wore the same expression. They did not look into the camera. Their body language and expressions were in complete contrast to the overjoyed troops inside the camp. There was no look of joy on their faces. Odd men out, they moved around awkwardly. Inside the military camp, these young Kashmiri men were clearly out of place.

The unsaid said everything, the unspoken spoke louder.

Find more articles on the ICC World Cup of 2011 and the semifinal match between India and Pakistan in our Sports section and the Sport Report blog.