By Shanaz Ramzi | Published 5 years ago 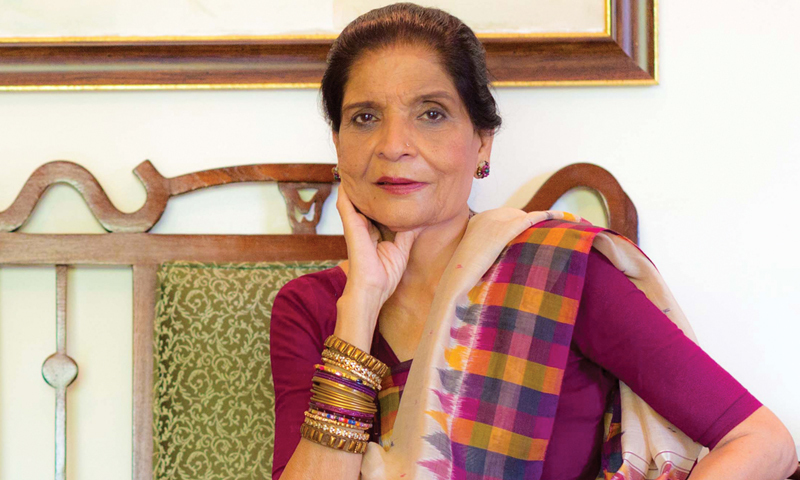 Zubeida Tariq is adamant that she should not be referred to as a chef. For her, the term implies that the person has done numerous courses and worked in hotels. In fact, she won’t even call herself a culinary expert. Tariq says she applies gharelu totkas to her cooking and says that most people who appear on TV and teach cooking, like her, are not professional chefs.

Zubeida Tariq, who appears on TV One, Masala TV and Zauq, feels that tastes haven’t changed drastically over the years . Chatpatta food, she says, is as much in demand today as it was decades ago. The one difference is that with changing times, many Pakistanis’ tastes are veering more towards fusion cooking than authentic local cuisine. Ingredients like fresh cream are being added to desi dishes now — something unheard of before — so now we have an exotic dish like malai koftas instead of plain koftas. Along the way, Tariq adds, we have also forgotten the adaab of eating, which used to be an integral part of our culture.

In fact, it was Tariq’s exposure to etiquette and the tradition surrounding the art of cooking and eating that piqued her interest in food. “I grew up looking at food being made from scratch in our house,” says Tariq. “It was never catered from outside. I remember seeing my grandmother use a pestle and mortar to grind the masalas; electronic grinders were never used. I have continued with this age-old tradition in my cooking.” Compared to other cuisines, Tariq feels Pakistani cuisine has a lot of variety to offer and, hence, is still a favourite with most Pakistanis.

After Pakistani cuisine, Chinese is extremely popular here, especially as it has been adapted to suit local tastes. Barbecue is another hot favourite with Pakistanis. Her own favourite Pakistani meal is simple: hand-ground qeema accompanied with khati daal, rice and pappadoms. And her dislikes? “I hate Japanese food,” she says candidly.

Zubeida Tariq is delighted that all kinds of ingredients are now readily available here. She elaborates: “All kinds of masalas are not only available today, they are well packaged. Even a variety of chillies are available in the market: hand-ground, machine-ground, and so on. As for vegetables, we now get a variety that was not available earlier, and their taste is far superior to that of veggies available abroad.”

Interestingly, Tariq is all for healthy eating, but strongly believes that healthy food means food that has been prepared in a hygienic way: washed thoroughly, prepared with clean hands and in a clean kitchen, and hasn’t been over-cooked. She adds, “Food that has not been prepared under hygienic conditions will not be beneficial to you, regardless of whether it is low in calories or cholesterol-free.”

Tariq is opposed to the present trend of churning out cookery programmes by every channel, offering what appears to be tasteless food by half-baked ‘cooks’ who don’t know how to speak or conduct themselves properly. She admits that there is a lot of money to be made in food channels and food-related programmes, and predicts that channels devoted exclusively to food, like Masala and Zauq, are sustainable ventures.

Your favourite cookbook?
I don’t remember names, but I like western cookery books as they are very detailed and follow standard, easy-to-understand measurements — like cups, teaspoons and tablespoons.
Your favourite restaurant?
I don’t eat out much, but enjoy Chinese food, so my favourite is Dynasty. I also like the meals at the Avari Towers’ new restaurant Live Asia.
Any particular food you want to learn how to cook?
The one thing I still haven’t learnt but would love to is baking!
Any one ingredient that you use the most and regard as essential for flavouring your dishes?
Ginger and garlic, especially for meat-based dishes, as there is a smell in all kinds of meats, and a ginger-garlic paste helps to get rid of it.