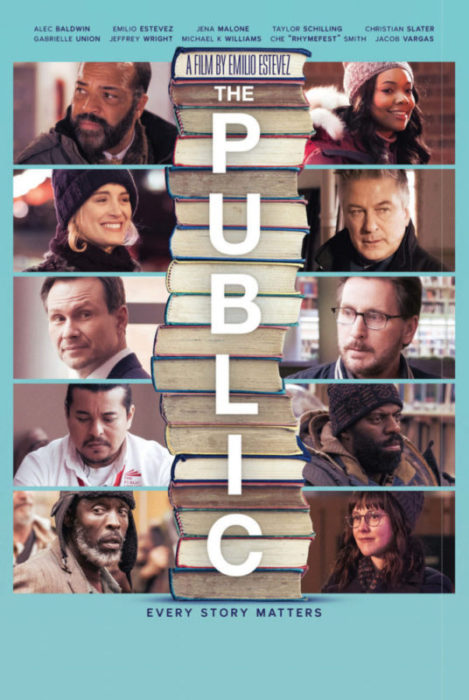 Emilio Estevez, the actor-director-writer and producer of the film, The Public, presents an unabashed message-movie that takes up the prickly subject of homelessness. In recent years, at any single point in time, over half a million Americans experience homelessness – shockingly high for a country that is ranked among the richest in the world.  To give the theme an interesting twist, Estevez fuses the issue with a unique style of impromptu civil disobedience staged in a public library – access to which is a public right granted by the US Constitution.

Estevez portrays Stuart Goodman as the chief librarian at the Cincinnati Downtown Public Library. Making his way to work during a bitterly cold Arctic spell in the city, he is greeted by a long queue of patrons waiting outside the library patiently in sub-zero temperatures. As soon as the doors slide open at 9:00 am sharp, these loyal patrons – all of them homeless – walk in with their carry cases and head for the washrooms. A group of regulars, wearing their entire wardrobe, spread their toiletries to brush their teeth, shave and clean up after themselves. During this ritual, they speak of two other companions who died of exposure the previous night. Stuart, accustomed to their routine, checks up on them and is introduced to a new group member.

In the middle of a good-humoured argument with his assistant, Stuart is called to the office of his employers. The library has been slapped with a discrimination lawsuit to the tune of $750,000 because Stuart threw out a homeless man, who everybody complained, had a particularly strong body odour. Grilled by the ambitious district attorney, Josh Davis (Christian Slater), Stuart is facing possible redundancy for costing the city government. Davis is particularly piqued because he is in the running for the mayor’s office and seeking endorsements from city notables.

The next morning, when another homeless is found dead on the footsteps of the library, Stuart identifies him as one of his regular homeless patrons. News reports broadcast that since the city’s homeless shelters were filled to capacity, he was the sixth to die of exposure to the elements,

At 9:00 pm sharp closing time, Jackson (Michael Kenneth Williams), who leads the 100 odd homeless persons in the library, informs Stuart that they have decided to occupy the third floor for the night to protect themselves from freezing to death from the frigid temperatures outside; he requests Stuart to declare the library a temporary homeless shelter. Consquently, a standoff develops between the occupiers and the authorities. The situation provides Davis with an opportunity to improve his electoral chances vis-a-viz his rival’s.

Itching for some action, Davis wants to send in a police tactical team with a battering ram to crash through the doors and tear gas the unarmed trespassers, who are temporarily occupying the public property. Not fully understanding the situation inside the library, the police chief calls in a hostage negotiator, Detective Bill Ramstead (Alex Baldwin), to speak to the occupiers. The introverted, straightforward Stuart at first, tries to stall Bill during negotiations, but Davis provokes Stuart into siding with his patrons in an exercise in civil disobedience. During the impasse, Stuart’s troubled past is revealed – a past from which he emerged cleaned-up, and ended up reading books in the very library that helped him earn a degree and turn his life around. Unfortunately, the storyline starts to drag due to lack of enough meat to fill its two-hour duration.

The Public is a social commentary on the use of a public facility for the public good. In this case, a library, which becomes the only refuge and a free watering hole, especially for the homeless and the unemployed, who use the computers to browse and stay in touch with loved ones, maybe do some reading and catch up on sleep.

However, delving into the past of some of these homeless men would have given a lift to the slow-paced film and added depth to the film, more so if Emilio Estevez wanted the characters to be viewed as more than just homeless bums. Only Jackson’s character comes close to being fully realised.

The movie ends on a strong note with over a hundred men, led by Stuart, stripping off their clothes and singing the classic song, “I can see clearly now,” as they face a heavily armed police contingent.