Bookshelves line the hallway of an obscure building on Karachi’s Elphinstone Street. At the far end of what appears to be a private library, hangs an imposing portrait. It is of a man who was once the secretary general of an underground movement known as the Communist League. His name was Mohammad Ruknuddin Hassaan.

Under Mr. Hassaan is a door.

These are the chambers of Advocate Akhtar Hussain, General Secretary of the Awami Workers’ Party (AWP). They serve as the party’s Karachi secretariat.

Contrary to popular belief, Pakistan’s left has slowly been integrating into a unified whole since 1988. The AWP is its latest incarnation. Founded in November 2012, the party elected Abid Hassan Minto, a constitutional lawyer, as its first president. He led for two consecutive terms — the maximum a chairman can serve. In 2016, the current President, Fanoos Gojar, was elected and the tenure was increased from two to three years. Gojar, previously president of the Awami Party, hails from a family of tenant farmers. 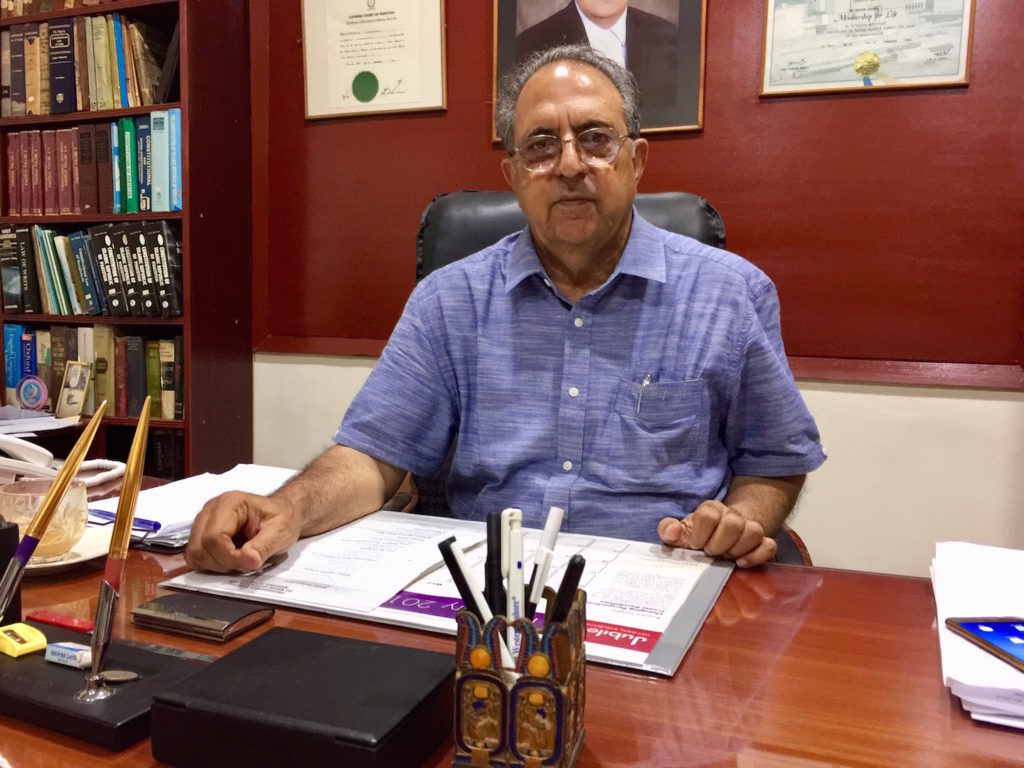 One of the AWP’s primary objectives is the abolition of the zamindari system of largeholders and the redistribution to each family of cultivators, 25 acres of irrigated landed (50 acres if unirrigated). Through this, it aims to end the social domination of the feudal class.

The party, which is personally funded by its members, conducts bi-weekly study circles at union council and district levels. It has developed its own syllabus in this capacity, with focus on political education. The study sessions, organised by Education Secretary, Sabauddin Saba, cover the constitutional history of Pakistan, class structure and struggle, multinationalism, the theory of surplus value and historical and dialectical materialism. The syllabus caters to beginners, as well as those at intermediate and advanced levels.

A “non-classist education system and the promotion of critical and constructive thought,” is one of the 15 points that make up the party’s 2018 election manifesto.

On June 3, 2018, law enforcement agencies blocked the AWP’s official website. It was because party workers were actively supporting issues raised by the Pashtun Tahaffuz Movement (PTM) and had attended its public gatherings across the country, according to Akhtar Hussain.

The party is currently in the process of forming an alliance with like-minded outfits, such as the Pakistan Mazdoor-Kissan Party, the Communist Party, the Awami Jamhoori Party, Jeay Sindh Mahaz (Khaliq Junejo), Tabqati Jidojahad (Dr Lal Khan) and the Awami Workers’ Party Jammu and Kashmir.

While the alliance, referred to as the Left Democratic Front, will come into effect prior to the elections, the parties have decided not to make an official announcement until after July 25. This has been done deliberately to emphasise that the alliance’s priority is not the electoral race but the struggle for social change.

In the 2015 local government elections, approximately 51 councilors were elected from the AWP, largely from Khyber Pakhtunkhwa (KP). The party’s largest support-base lies in KP’s Buner district, from where its president hails, and from where he will be contesting on the NA-9 seat come July 25. The AWP also enjoys support in Shangla, Swabi, Mardan and Nowshera districts of KP.

In Islamabad, the party is fighting for the rights of shelterless people and has organised door-to-door campaigns and corner meetings in this capacity. In the last one year, it’s membership has increased by approximately 1,000.

The walls of the Workers’ Hall, in the AWP’s Karachi office, are covered with portraits of leftists, from Marx and Engels, to Bhagat Singh, Fidel Castro and Mao Zedong. Mohammad Ruknuddin Hassaan’s portrait, however, hangs alone, in the library.

Hassaan, who was a PhD from the University of London, migrated to Pakistan from Hyderabad Deccan in 1952 and became a member of the Communist Party of Pakistan (CCP). He was head of the Awami Adabi Anjuman, an underground literary association that was formed after the CCP and the Progressive Writers’ Association were banned in 1954. Hassaan was also the principal of Abdullah Haroon College after Faiz Ahmed Faiz.

The banned CCP went undergound and split into various groups. Among these were the Socialist Party, founded in the early 1970s, of which Abid Hassan Minto was general secretary and the Communist League, founded in 1980 by Hassaan. After Hassaan’s death in 1984, the two parties merged and formed the Workers’ Party in 1988.