In Search of a Home

Among the various segments of humanity in quest of refuge, the Rohingya from Myanmar have lately attracted considerable international attention, not least because the vessels they were on kept getting shunted from from one potential port of call to another, with neighbouring states such as Indonesia and Malaysia disinclined to offer them sanctuary.

The conditions that drove them from their home state of Rakhine, previously known as Arakan, have been bubbling over for several years, however, and have included pogroms instigated by extremist Buddhists. This sounds like a contradiction in terms, but clearly isn’t in the context of Myanmar and Sri Lanka, at least.

Even the Dalai Lama felt compelled to mildly reprimand Myanmarese opposition leader Aung San Suu Kyi for refusing to utter even a word in support of the human rights of the Rohingya, apparently because she felt that doing so would diminish her National League for Democracy’s chances in the forthcoming national elections.

In terms of electoral politics, that makes sense. In terms of moral leadership, it doesn’t, particularly for a recipient of the Nobel Peace Prize.

Suu Kyi’s father, General Aung San, is a widely respected historical figure on account of his status as a key founding father of independent Burma, even though he was assassinated several months before formal independence in 1947. Not very long before he was murdered — probably, according to some sources, in collusion with the colonial power, Britain — he is said to have received a missive from Mohammed Ali Jinnah in which Pakistan’s founding father explained why he had rejected a plea from some Rohingya for the territory they dominated to be incorporated into (East) Pakistan. Burma, Jinnah declared, was beyond his remit and he was disinclined to interfere in its affairs.

One of the most detailed texts in the context of the Muslim predicament in Burma was put together by Israeli diplomat Moshe Yegari as a Heidelberg University thesis in 1972. His research dates the Muslim presence in Burma back to the ninth century, long before the country became a British colony and witnessed the arrival of Muslims from neighbouring Bengal.

Yegari notes the presence in the Burma he knew, of a broad range of Muslim sects, as well as the incorporation of some of them into the mainstream, which included representation at high levels of the government structure, at least until the military coup of 1962.

The struggles for autonomy and/or independence paved the way for the notion that the Rohingya aren’t really Myanmarese, and in the context of the boatloads this has been emphasised by the presence on the vessels of Bangladeshis, who are fleeing not ethnic relegation but economic despondency.

Over the past few decades, many Rohingya have escaped to Bangladesh, and find themselves in refugee camps with little or no prospect of being accepted as citizens by Dhaka. In Myanmar, meanwhile, they are formally designated as Bengalis — the term Rohingya is officially never used — based on the theory that they were, for the most part, relocated as a labour force during the period when India and Burma were both British colonies. In the Myanmarese mindset, it follows from this proposition, therefore, that the Rohingya should be “repatriated” to Bangladesh.

The rhetoric in this regard is all too often couched in purely racist terms, harping not just on ethnic and linguistic differences but on skin colour as well.

The inescapable fact, which the Myanmarese authorities refuse to acknowledge, is that most of the Rohingya have been settled in Rakhine/Arakan state for generations. Large numbers of them are now forced to live in makeshift camps where they are effectively prisoners of the state.

In the event, it is not particularly surprising that the G-word has reared its ugly head. In May, Professor Penny Green was quoted as saying, following months of research in Rakhine: “The Rohingya are faced with two options: stay and face annihilation, or flee. If we understand genocide to be a process, that is what this is.

“Those who remain suffer destitution, malnutrition and starvation; severe physical and mental illness; restrictions on movement, education, marriage, childbirth, livelihood, land ownership; and the ever-present threat of violence and corruption.”

Escape, unfortunately, offers no guarantee of survival. One would have thought that the ships that lurched hopelessly from one inhospitable port to another in recent months offered sufficient testimony to humankind’s callous apathy, but this appalling conduct was supplemented by reports from Malaysia and Thailand of incarceration, forced labour, blackmail and mass graves. In Indonesian waters, meanwhile, relief for the refugees came from fishermen rather than the authorities. 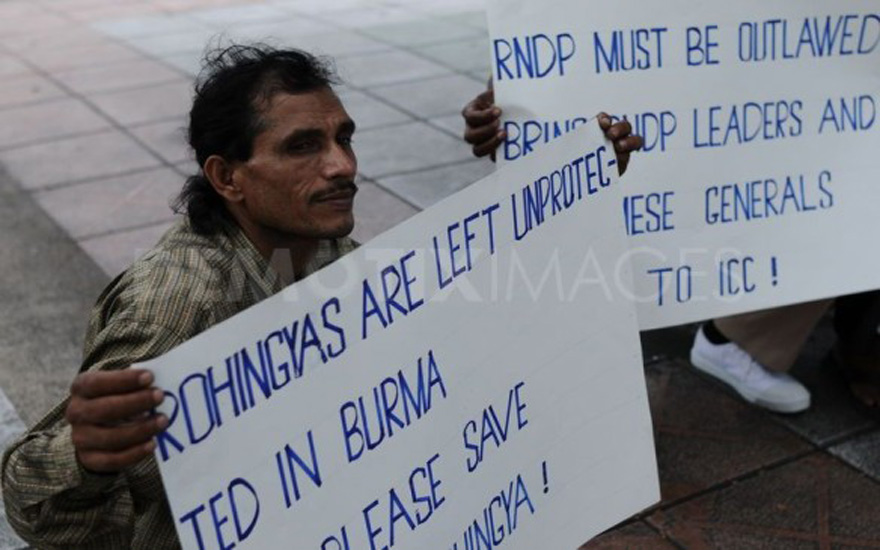 It has, meanwhile, been made clear to the Rohingya who have found sanctuary in neighbouring countries that the gesture is temporary.

The saga of the vessels inevitably dredged up comparisons with the fate of European Jews in the 1930s, when shiploads were turned away by one port after another. A conference in late May in the Norwegian capital, Oslo, received a video contribution from the financier George Soros, who noted that a visit in January to a Rohingya settlement reminded him of his youth as a Jew in Nazi-occupied Europe. “You see,” he declared, “In 1944, as a Jew in Budapest, I too was a Rohingya.”

Soros added that the settlement he had seen was a ghetto, an “involuntary home to thousands of families who once had access to healthcare, education and employment. Now they are forced to remain segregated in a state of abject deprivation. The parallels to the Nazi genocide are alarming.”

One offer for resettling all Rohingya, on the basis of their religious affiliation, came from Gambia in West Africa, the smallest country in the continent. More practically, the Philippines offered sanctuary at least to the boat people, and even the United States offered to pitch in. Malaysia, Indonesia and Thailand, on the other hand, have been extremely reluctant to accept long-term responsibility for Rohingya refugees. This is understandable in some respects, given that these countries — like Bangladesh — already have enough problems of their own. But if there ever was a case for exceptions to be made, the Rohingya surely fit the bill.

From the US to Southeast Asia, the stress has broadly been on persuading Myanmar to change its attitude towards the Rohingya. It has largely been a softly-softly approach, though, purportedly in order to minimise the chances of setbacks in the country’s gradual transition from military rule to some form of democracy. There is thus little chance that the sanctions lifted or eased in recent years will be reimposed.

That arguably makes sense in some respects, given that the authorities in Myanmar have rarely reacted well to international pressure, and it is perfectly feasible that precipitate action would, if anything, exacerbate hostility towards the Rohingya. At the same time, however, what are the chances of Myanmar altering its mindset in the absence of constraints on its behaviour?

What most certainly will not help is a mid-June statement from what The Independent described as “the Pakistani Taliban’s most hardline faction,” which called on the Rohingya to “take up the sword and kill in the path of God.” Inevitably, outpourings of this variety feed into the propaganda whereby the Rohingya are seen not just as an alien entity, but a dangerous one to boot.

On a global scale, amid a refugee movement that, according to the United Nations High Commissioner for Refugees, has risen above 50 million for the first time since World War II, the Rohingya are but a drop in the ocean. Southern Europe is at the receiving end of thousands of refugees each week from the Middle East and North Africa, large numbers of whom drown during the relatively short passage from one land mass to another, largely because rickety, overloaded transport is provided by operators who seek to profit from the desperation of growing segments of humanity.

The European Union has contemplated, but not yet undertaken, military action against people-smugglers in Libya, which has turned into a virtually lawless state since Nato forces played a crucial role in ousting the Gaddafi regime. Large numbers of those who are willing to risk a watery grave hail from Syria, where the ongoing conflict has spawned millions of refugees. A great many others hail from countries about which much less is reported in the news, such as Eritrea.

In late June, meanwhile, a stowaway fell to his death from the undercarriage of a flight from Johannesburg to London. It wasn’t the first such incident, and probably will not be the last. The level of desperation that drives such behaviour is almost impossible for most of us to contemplate. It’s also all too easy to overlook the fact that it was primarily “economic refugees” who made a success of distant colonies such as America and Australia.

The latter’s prime minister recently said “nope, nope, nope” to the prospect of accepting any Rohingya refugees. Tony Abbott has staked his reputation on stopping the refugee boats, and his regime claims to be doing the asylum-seekers a favour, but recently faced embarrassment when it was was unable to deny having paid people-smugglers, in at least one instance, to turn back a boat headed towards the Antipodes from Indonesia.

It is hard to say whether the Rohingya would have encountered a less hostile reception in nearby or distant lands had they not been Muslim, although one can hardly ignore the fact that they have faced rejection in Indonesia and Malaysia, too. But, while the Gambian offer is touching, it is the Rohingya’s status as an egregiously beleaguered segment of humanity that should attract our attention, concern — and action.