How Many Relationships will Pakistan Spoil Before it Cracks Down on Militants? 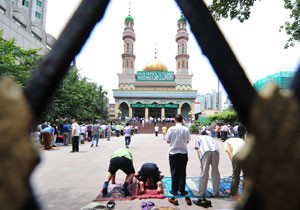 Xinjiang region is China’s largest administrative division. It produces large quantities of natural gas, is home to most of China’s Muslim Uighur community and borders Pakistan, among other countries.

And two weekends ago, it witnessed two bomb blasts in Kashgar, a key city.

By August 1, news reports highlighted that Kashgar officials believed that the attacks were organised by Uighur militants working under Pakistani-trained leaders. The New York Times believes that this could represent “growing Chinese impatience with Pakistan’s inability to control radical groups operating within its borders.”

Suddenly the ‘evergreen’ Sino-Pak relationship Pakistani politicians like to tout when they feel like distancing themselves from Uncle Sam seems shaky. And sharing a land border with our nation reveals itself to be not an opportunity for trade and development but a risk that one might wake up to learn that innocent civilians are dead.

ISI director Lt. Gen. Ahmed Shuja Pasha was concluding a visit to Beijing just as the accusations began to make news. Pasha presumably had to smooth some ruffled feathers and, if the allegations were supported by the central government, feel the Chinese establishment’s ire. He is no stranger to this role: many believe that Pasha was in a similar position in July when he visited Washington just days after the US suspended $800 million in aid to Pakistan amidst doubts about whether the ISI and the government chose not to share information about Osama bin Laden’s Abbottabad hideout.

But Pasha’s job does not involve eternally apologising to slighted allies. It is about maintaining this country’s security and ensuring that groups like those training and nurturing violent militants are eliminated. International disdain should not be a prerequisite for him to realise that.

As it loses more and more face on the international stage, the Pakistani government needs to evaluate how much it’s willing to sacrifice for the sake of pretending the militant problem does not exist. The costs keep getting higher and the gains look slim. Meanwhile, the country’s own military grows sympathetic to perspectives like those of Hizb-ut-Tahrir, which sees Pakistan as irrelevant when compared to the needs of the greater Muslim ummah. Will this latest rebuff be a turning point?

If it isn’t, Pakistan stands to lose a great deal. China is an economic power that has helped Pakistan with armaments, port development, our satellite programme and more. The last time Islamabad got close to paying China back in meaningful terms was when Pakistani officials helped organise Nixon’s landmark visit to Beijing in 1972. Since then, as anyone but a hyper-nationalist who screams about China ‘stealing’ the profits of the yet-to-succeed Gwadar could tell you, our end of the relationship has been best-known for the brutal murders of Chinese engineers.

Some warn against reading too much into these allegations. The view that Sino-Pak relations will remain on their previous path to closer intimacy does have some factual basis: China was, as mentioned above, a critical part of this month’s launch of Pakistan’s Paksat-1R satellite, and China has yet to issue any further statements about cutting investments. An article in Foreign Policy argues that this latest incident will be only a slight hiccup in Sino-Pak relations. Citing doubts about the validity of Chinese officials’ claims, Arif Rafiq underlines the strategic importance of the Sino-Pak relationship to both parties.

What those like Rafiq fail to note, however, is that China is not the questionable ally here: Pakistan is. So while the latter might be helpful to China in terms of developing landlocked Xianjing, the Chinese government has proved itself to have more than enough acumen to not depend on a country with crumbling institutions and security conditions that are pushing even local businesses into the red. China is thus unlikely to see Pakistan as the indispensable solution to its Xianjing problem. Such arguments resemble those once given for why the kind of Pakistan-US split we are witnessing today was characterised as unthinkable. Frustrations will continue to take their toll, just as they did with the Islamabad-Washington bond.

The article also underscores shaky evidence about Islamic parties “treat[ing] their country’s alliance with China as a sacred cow.” True or not, this assertion seems irrelevant: extremist elements are hardly unified in their command and their views, and some factions have proved themselves to be more than willing to sacrifice Pakistan’s long-term interests, whether out of incompetent planning or the fact that they prioritise what they see as the global Muslim interest more than the well-being of the Pakistani state.

Even if one considers that no clear change in Chinese policies has occurred, the fact that Pakistan was specifically mentioned when blame for these attacks was apportioned is a sign of growing tension. Something might give soon – it is up to the establishment to ensure that it does not.

And that requires changes in both policies and mindsets. Some on the religious right would argue that given the plight of Uighur Muslims, supporting their rebellion is Pakistan’s duty as a Muslim state. That school of thought would do well to remind itself of its equally virulent belief that Islam is a religion of peace, not violence, bloodshed and dead innocents.

It is slightly absurd that with things as they stand, the biggest ‘gift’ we can give our ally is a preventive measure against an enemy we’ve helped prosper. But such are the twisted politics of our two-timing establishment.