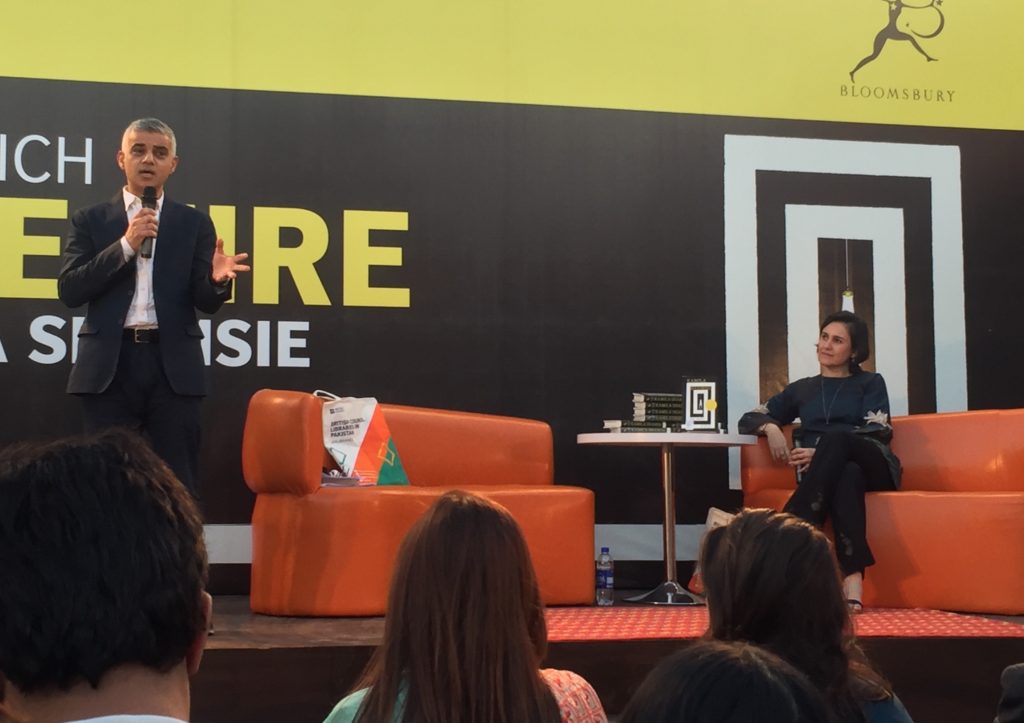 Kamila Shamsie and London Mayor Sadiq Khan on stage in Karachi. (Photos by the writer)

KARACHI: “I hope you all understand that Kamila is ours now,” joked Sadiq Khan, Mayor of London, while addressing audiences at the launch of Kamila Shamsie’s novel, Home Fire, at the British Council this afternoon. The Q and A session with the author was moderated by Rosemary Hilhorst, Director of the British Council, while Khan was the guest of honour at the event, held in a courtyard outside the library, under a clear winter sky.

Responding to Hilhorst’s question of whether the author bases her characters on people she knows, Shamsie said that this was not necessarily the case, and that for the most part, characters developed during the writing process. “You start off thinking one thing, but the novel inevitably heads itself in a particular direction, and details begin to emerge on their own,” she said. The author found it amusing that while some of her friends and acquaintances in London were worried that certain characters may have been based on them, people she knew in Karachi were actually upset that no character depicted them. Sadiq Khan quipped that he was relieved to find that the politician in the novel was a Tory.

Commenting on  how the idea for the story came into being, Shamsie recalled, “I had just finished writing A God in Every Stone, when I got a call from Jatinder Verma, Artistic Director at the Tara Theatre in London.” Verma asked Shamsie to write a play for him. “I said I don’t know how to write a play; he said adapt one.”

Shamsie hadn’t read Sophocles’ play Antigone, on which her novel is based, since her university days. Upon revisiting it, she was particularly captivated by the start of the story. At the core of her own novel, which was longlisted for The Man Booker Prize 2017, explained the author, lies a fundamental question: what if your sibling was an enemy of the state? And what if your duty as a citizen, came into direct conflict with your duty as a sibling?

Sadiq Khan, during his brief talk, emphasised that “London is open — to culture, to values and to visitors.” Khan explained that while “culture is an important part of society, great culture shapes society.” He shared his conviction that “a child, a book, a pen and a teacher can change the world.”