From Balochistan: A Tale of Promise, Prejudice & Potential 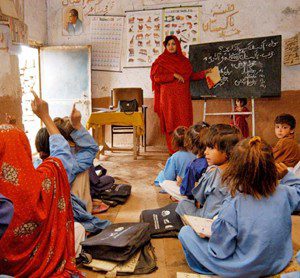 School’s out: In Balochistan, most children (59%) don’t go to school. Source: thebalochhal.com

I board an early morning flight from Islamabad to Quetta. In the last one year, this is my 50th trip to Balochistan, the beautiful but bitter province of Pakistan. I have been assisting in the implementation of quality education initiatives for poor and destitute children. The flight to the provincial capital lasts one hour and 15 minutes, and as usual, we have a rough landing.

I step out of the airport to the chilly Quetta breeze and start chatting with the driver who always rushes excitedly towards me, even if he sees me thrice a week. I always feel welcome here. This city is one of a kind. It has real character. The Baloch as well as the Pashtun (Quetta is largely Pashtun dominated) tradition of hospitality colours everything, and is impossible to miss. Most men are strong and well built, and have shawls draped around themselves to keep warm as the temperature drops — some men even have mufflers and woollen scarves falling from their shoulders. It is now November and even the hardy men here need to protect themselves from the early winter that embraces the city.

There are hardly any women visible on the road but there are some young girls dressed in blue and white uniforms heading to schools in vans, buses and by foot. Very few are in cars.

The children here are extremely beautiful. Sadly, the majority I see are not wearing uniforms like the students in blue and white. Sometimes it seems as though I see children everywhere except in schools. More than 59% of children of a school-going age do not have any access to schooling here. There are simply not enough schools for everyone. And where there are schools, cows and sheep and other herds have comfortably made themselves at home.

Female literacy is as low as 14%, yet women are fairly active in public life in Quetta. But as one moves to the scattered interior of Balochistan, the horrible state of women becomes disturbingly obvious. The girl child is completely neglected and sidelined here. She is denied everything, starting with adequate food and moving on to schooling and medical care, even in times of dire need. So hospitality is not the only ubiquitous thing here. Poverty permeates the land and is as harsh as the biting Quetta wind.

Vendors have set up small stalls along the roadside and are preparing for business as usual. The brown, dusty mountains offer a unique view, forming a mysteriously quiet background. Under the only cement bridge in the city, I notice a contingent of some two to three hundred armoured military vehicles. I ask the driver about them. He looks at me in the rear-view mirror and replies rather plainly, “They are for the military operations.”

Days earlier, I had watched a video online in which family members of missing persons from Balochistan were protesting. They called upon the government to take action and give them access to some information about their loved ones: their whereabouts and whether or not they were even alive.

Bleeding from the wounds sustained in the ongoing and ruthless separatist struggle, mourning from endless ethnic target killings and buckling under the crushing helplessness felt in a place where hundreds, if not thousands, of people go missing without a trace, denizens of Balochistan live in an environment of fear, violence and blatant human rights abuses.

Every year, scores of people disappear in Balochistan. It has become a large and internationally known problem, especially over the last five years. Moreover, the sinister role of Pakistan’s security agencies is an open secret. There are no arrest warrants, no legal records, no first information reports and no detention charges. People keep disappearing, and sometimes they are found dead on the outskirts of city, under bridges or in the rough mountain ranges. Their dead bodies show horrendous signs of physical as well as sexual torture but nothing is done: the guilty are not tracked down, the families of victims find no justice. All voices are largely silenced when it comes to the nameless, faceless ‘missing persons’ in Balochistan.

I head straight to my office and have meetings all day. I meet with government officials as well as locals from civil society organisations. I then attend a teachers’ convention event and meet up with teachers, children and their parents. I am overwhelmed at the talent and wealth of abilities I find at the convention. In particular, the young women I meet are not just intelligent but also dedicated. In a largely tribal and conservative society, there are many Baloch women who have struggled against all odds, including against discriminatory social taboos and cultural norms. These women symbolise success.

I meet with one such amazing woman who was previously a provincial cabinet minister and who is still a member of the Balochistan parliament. No other female minister, even of those sitting in Islamabad, is as intelligent, articulate and eloquent as she is. I feel happy to be here.

I return to my hotel, the only five-star hotel in Quetta. From the outside, it resembles military barracks. The interior, however, is tastefully done and decorated to promote the local cultural heritage of Balochistan. The Serena management deserves credit.

I engage with more people from different international humanitarian organisations who are still working for flood relief in Balochistan. As a Pakistani, I salute these people. Where our own government (largely) has not been able to adequately respond to this disaster, where people in the camps have been left vulnerable to live or die on their own and where there is an ineffective and unresponsive government whether provincial or local, private citizens of all stripes and people from the international community have stepped forward with their generous assistance. Humanity knows no geographic boundaries and no religion. In Quetta, my faith in the intrinsic goodness of humankind always gets re-confirmed.

While sitting in the lobby and chatting with some Turkish doctors, I happen to spot one of my favourite childhood television actors from Balochistan, Ayub Khosa. With the looks of a Greek hero, he is an extremely handsome man in his mid 50s, with dark golden, naturally curled hair. Dressed in traditional, white shalwar kameez and brown Baloch chappals, he tells me how his village near Jhal Magsi (a very poor and underdeveloped district of Balochistan) came under water and he fled barefooted to Karachi to save his life. Shamelessly, I keep uttering, “I am a huge fan of yours.”

Suddenly there is a panic among the Serena staff, and at least a dozen men dressed in identical black suits rush in with a white-skinned, grey-haired man. Quite a contrast to Khosa’s beautiful attire, I say to myself. “Why all these men in black?” I ask the manager of the hotel, who is standing nearby.

“Oh this is the American consul-general. He’s visiting Quetta.” Then he whispers, “They are opening an American consulate here,” before emphasising, “in Quetta.” He looks at me directly. “Don’t you know?” I roll my eyes, furious at the audacity with which US has entrenched itself in Pakistan. They haven’t even spared Quetta.

The next morning, I travel to the interior of Balochistan. The province is larger than Germany and covers more than 44% of Pakistan. It has huge deposits of gold, copper, coal, lead and other natural resources. But despite the enriched minerals and natural resources, the local population is denied that wealth. There are stark levels of poverty, economic marginalisation and a constant dearth of opportunities for people to secure decent livelihoods. The province has the highest prevalence of rural poverty in Pakistan (70%) and according to the UN’s human development index, 10 out of the 20 lowest ranking districts in Pakistan are in Balochistan. The terrain is tough and there are no adequate transportation networks.

The despair lies in direct contrast to the spectacular landscape: a tall, hazy brown mountain range and light grey skies are enveloped by a refreshing chill. The peculiar and breathtaking geography makes travelling within Balochistan seem like a fantasy. The local police, however, can add a bit of terror. Dressed in the civilian garb of the local Levis force, they cover their faces with somewhat-awkward brightly coloured shawls, hang fully loaded rifles over their shoulders and patrol in their open jeeps. Interestingly, they are culturally very sensitive in their dealings with women. Of course, there are other things to make me a bit uncomfortable: gunfire can erupt any time, from anywhere. It almost feels like a war zone.

I reach the Chaman border area in Qilla Abdullah. It is the de-facto Pak-Afghan border. The jeep makes its way through the bumpy single road, surrounded by sharply peaked camel-coloured mountains. There are a number of military checkpoints at higher surveillance angles. NATO supply trucks pass us from the left and the right, and as I approach the border, my international-roaming cell number starts receiving text messages from mobile networks welcoming me to Afghanistan. We swing past Dosti Gate (Friendship Gate) and Kandahar is right there. It is one of the most splendid sights I have ever seen. There is life all around, in innumerable colours and shades. There are small groups of people, men and women, young and old, sometimes a dozen-strong, crossing over from either side of the border. Women are dressed in their multi-hued, ankle-long frocks and rusted silver jewellery — each item would likely sell for hundreds of dollars in an antique shop. There are singers and cultural performers from Afghanistan who regularly come into Balochistan, some just to meet their Pashtun brethren and others to perform. In one of the schools I visit, some of the Afghan students say they cross the border everyday to come to schools in Balochistan to make friends and play.

Then I meet an old woman. I’ll never forget her. Her total material wealth lies in the two clay cooking pots and one goat she possesses. She keeps thanking God and telling me that her family lives a comfortable life. I almost cry when she takes off her only bangle to give to me as a present. “Generosity and hospitality has nothing to do with being rich or poor,” says my driver.

The simplicity, warmth and goodness of these people, far away from the Wi-Fi life in Islamabad are striking. In a state of absolute nothingness, people living in Balochistan are loving and generous not only towards each other but also towards unknown visitors like me. Religion, income, status and ethnicity are unimportant. There is so much to learn from them. If only peace and public safety is restored and a paradigm shift from security operations to pro-people development is pursued, Balochistan could be the most promising part of Pakistan. It has the potential. And it has its most valuable resource: its people.