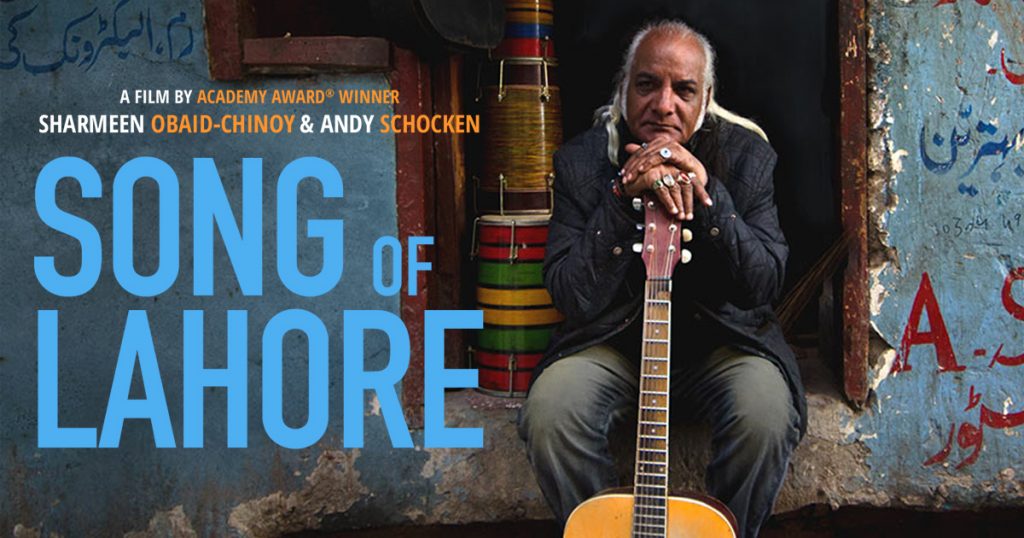 Academy Award winner Sharmeen Obaid-Chinoy and Andy Schoken’s Song of Lahore (2015) traces the journey of a group of musicians from Lahore  to New York to perform at the Lincoln Centre. The film is a commentary on the declining industry of classical music in Pakistan and is an interesting addition to Obaid-Chinoy’s body of work since the subject matter of this film is starkly different from her previous films such as A Girl in the River (2015) and Saving Face (2012).

The film was very well received all over the world and screened at multiple international film festivals including Toronto’s Hot Docs Canadian International Documentary Festival, North America’s largest documentary film festival as well as Mississauga’s Mosaic International South Asian Film Festival. Canadian film critic Peter Howell gave it three out of four stars in the Toronto Star. He praises the “rich narrative” of the film and describes the experience as a “feel-good exploration of making music. Glenn Sumi of Toronto’s NOW Magazine gave the film three out of five stars. He mentions the “nail-biting excitement” towards the end of the film and in fact says that the glorious performance in the penultimate sequence of the film makes up for the excess of information in the beginning of the film.

While there is some  political commentary, for example some characters link the fall in the music industry to ‘Talibanisation’ and Zia-ul-Haq’s ‘Islamisation’, the main body of the film focuses on the artists and their triumphant journey to New York. Obaid-Chinoy alters her usual narrative style, which is most evident with her creative use of music, but still manages to keep the story crisp and clean. The boundaries between diegetic and non-diegetic music (music within the world of the story versus background score, for example) is not always clear. This works well for the narrative as it allows the audience additional familiarity with classical music, thus spurring a greater degree of emotional connection with the artists and their music.

There are certain formal elements that separate Song of Lahore with not only Obaid-Chinoy’s previous films but also documentaries in general. The film ends on a rather triumphant note with the successful performance of the Sachal Studio artists followed by shot of a local concert in Pakistan, suggesting the potential revival of classical music. The audience, then, is able to see the musicians overcome the obstacles that they were facing in the first half of the film. This kind of narrative, with a clear beginning and end, is very rarely possible in documentary films. In the course of ninety minutes, an audience member who was previously completely unfamiliar with Pakistani classical music, at the end of this film, will have gained insights about many areas of the music industry.

The film remained focused on one specific aspect of the characters’ lives , namely music, and makes for a clear-cut narrative. For instance, their excitement when interacting with street musicians while exploring New York and so on. However, the first half of the film seemed a little confusing  because of the number of characters that were introduced. While all characters shared engaging anecdotes, it became difficult keeping up with all the storylines. The second half of the film, being more focused on the group of musicians rather than individual musicians is relatively easier to grasp and follow.

Overall, Song of Lahore is not only  historically and culturally informative but is also an emotionally engaging story which stirs mixed feelings amongst the audience. Although it documents the considerable economic and social difficulties that these musicians face, it carries a positive message, pushing for the revival of classical music. In fact, the film also encourages one to embrace and celebrate other endangered forms of art, thus leaving the audience with a refreshed perspective.

Watch the trailer below.