Donkeys in the Desert

I learned to drive a donkey cart on my first day in Siwa. I’d been cajoling my donkey cart driver for the better part of the day, as he drove from one tourist destination to the next, to let me try my hand at it, and finally, ten minutes before we reached the hotel, he gave me the reins. It took him about a minute and a half to snatch them back — apparently donkeys are much more difficult to control than previously anticipated.

The thing about Siwa town, an Egyptian Oasis that sits close to Libya and on the edge of the Great Sand Sea, is that donkeys have the lay of the land. “I have donkey,” said Ashraf, who became our donkey cart driver, almost immediately after we stepped off our bus, and five minutes later, he and his donkeys were dragging us to Palm Trees Hotel, though we hadn’t made reservations.

Ashraf helped us get a discounted price for our hotel rooms, and refused to let us pay him. “I come tomorrow, 11, and take you to the oracle.”

Eleven the next morning, Ashraf was there, donkey carts included, to take us to the oracle. In Siwa, you had the option of renting bicycles and riding around the town to the various springs and monuments scattered around, or riding a donkey cart.  We chose Ashraf and his donkeys.

Ashraf was the most endearing of tour guides, in addition to spouting off details about the oracle (thought to be so powerful, that both the Persian King Cambyses and Alexander the Great consulted it), he pointed out his school, his house, and the first store in Siwa. He dropped us off at the Oracle of Amun, and pointed us towards the ticket booth. “I be here when you come back.” 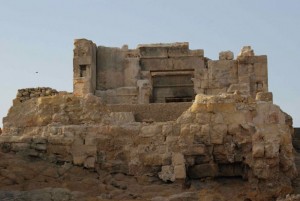 We spent an hour in the warm morning sun, wandering about the structure, looking at the hieroglyphics and being amazed by the view from the top. Architecturally, there is nothing remarkable about the oracle. The structure is weathered, and looks better from afar. The rooms and chambers that you can crawl into have no remains of the wall paintings that must have been there during its prime. When we were done, Ashraf announced our next stop: Temple of Amun.

Built by King Nectanebo II in 4 BC, it was destroyed by an Ottoman general in 1896 to use its remains as building material. A small section of the wall remains, T-shaped, it rises out of rubble, and stands majestic on the side of the road. Some wall paintings are visible on the western side of the wall. After clambering around the wall for 10 minutes, Ashraf hollered for us to get back. “Cleopatra’s Pool,” he announced.

The ride to Cleopatra’s Pool led us through a variety of orchard groves — date palms, olive trees, and a variety of unidentifiable fruit trees flanked us on either side — this was when I began to convince Ashraf I could drive donkey carts. 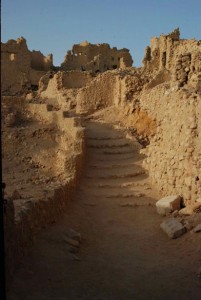 Time warp: The ruins of the Temple of Amun. Photo: Mariya Karimjee.

Considered one of the nicest of Siwa’s natural watering holes, Cleopatra’s pool has no historical significance, especially pertaining to Cleopatra herself.  It is, however, one of the places that Siwan youth will come back to repeatedly to cool off. We watched, in mild horror, as Ashraf took off his shirt, then his shorts, and wearing nothing but a flimsy excuse for underwear, dove into the pool. He was shocked that we didn’t follow him in. The water in the pool is naturally warm and women are required to wear shorts and a shirt in order to bathe; they are also discouraged from bathing while men are in the pool. The shade, and the humidity, is a hotbed for mosquitoes, and after Ashraf was done with his swim, he drove us back to Siwa town.

This was when he agreed to let me drive the donkeys. Although I nearly killed everyone involved, there were no hard feelings.

Tomorrow, he promised, we would go to Gebel al-Mawta (Mountain of the Dead), the Shali fortress and to the desert. He pointedly told us how much he wanted to be paid (25 Egyptian pounds, a sum much less than any of us would have agreed to, but he refused to take more).

For more details on Egypt and Siwa check out these sites: