Does the Pakistan Cricket Team have the Goods to Really Win the Cup?

A devastating blow seemed to hit the Pakistani cricket team early on in their match on March 19. When Umar Gul pulled up with a what looked like a painful knee injury during the second over against Australia, Pakistan’s chances of beating the Aussies and clinching the number one spot in their group seemed to suddenly drop like a ball through Kamran Akmal’s fingers. And in a way, it was happening in the worst way possible: not by Australia outclassing them, but a cruel twist of fate. It looked like Ricky Ponting’s boys were being handed a gift from the cricket Gods.

Of course, just as quickly as Gul stuttered and stopped and black clouds swept over Pakistan, the skies miraculously cleared. After a bit of on-field medical attention by the physiotherapist, Gul was back. He kept the Aussies to just two runs in his first over and nabbed the first wicket of the match in his next over. Fortune was not on the side of the Aussies after all.

By now there should be no doubt now about the depth and talent in Pakistan’s bowling line-up. Pakistan has been cruel and miserly in giving up runs to Australia and the West Indies. The timing for this superb display of bowling prowess and intelligent captaining has been perfect: it allowed Pakistan to grab top spot in their group and thus face off against the weak Windies in Mirpur, allowing the Green Shirts to comfortably move into the semis (see a list of past World Cup winners in the table at the end of this post).

Here is what ESPNcricinfo’s Osman Samiuddin wrote about Pakistan and their bowling in the ICC World Cup 2011:

“They have every modern-day bowling option you can imagine. They have a right-arm fast bowler, a left-arm fast bowler (and both are fast, not fast-medium or some such dilution), a left-arm spinner, an offspinner, a legspinner, a right-arm medium-pacer; save for the chinaman, each and every angle is covered here. They have new ball wicket-takers, old ball reverse-swingers, death-over specialists, choking spinners through the middle, attacking ones through the same.

Just in case of injury or form, they have Shoaib’s pace, Saeed Ajmal’s off-spin and Junaid Khan’s left-arm angle as back-up. So well-stocked have they been with options, they’ve even opened with spin, something they hadn’t done in 13 years before this, and with some success.” 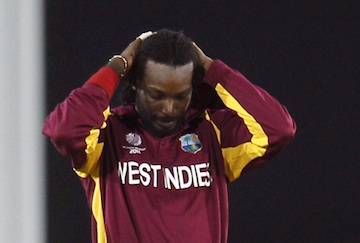 The West Indies’ Chris Gayle holds his head in disappointment after Pakistan crushed his team by 10 wickets in the quarterfinals of the 2011 ICC World Cup. Photo: AP

Pakistan’s surprise consistency (the crushing 110-run loss to New Zealand the obvious exception) and discipline has caught everyone off guard. Everyone knew the team had the talent to win games, but with such ease?

There, of course, have been other surprises in this tournament, too: Ponting’s failures and England’s inconsistencies, to name just a few. England has been so unpredictable (while Pakistan has been so commanding) a ESPNcricinfo commentator said, “If England are the new Pakistan, Pakistan are fast becoming the new Australia.”

But are the Pakistani cricketers on a sustainable roll? Do they have unstoppable momentum and real unity? Are they getting better as the tournament progresses?

Things looked good coming into the World Cup too. Pakistan were solid in their series in New Zealand in early 2011 when they took the series 3-2. Captain Shahid Afridi was even talking a good game in the lead-up to the international cricket tournament, saying his boys were working hard and playing cohesive team cricket.

And as expected, they trounced Bangladesh by 89 runs in an World Cup warm-up match (though three days later they floundered against England). After playing well in both Sri Lanka and Bangladesh, Pakistan heads to the Punjab Cricket Association Stadium in Mohali, India, for their semi-final match.

And if Pakistan can hold it together and continue to play what Reuters has described as “clinical” cricket, steadily spinning their opponents into the dust, they will play the finals in Mumbai on April 2. But playing in India will have an altogether different vibe for the Green Shirts from playing in the less hostile terrain of Sri Lanka and Bangladesh.

Still, I would mark your calendars. My bets are on Pakistan to be there.

What do you think? Vote in out poll below:

Do you think that the Pakistani cricket team will reach the finals of the 2011 ICC World Cup?

Past World Cup Tournaments and Winners

Can Pakistan be the next ICC World Cup Champions?