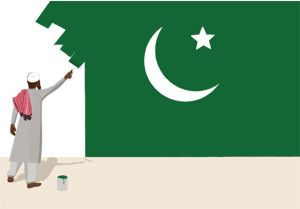 It is no secret that Ahmedis in Pakistan are treated worse than animals, the latter at least having the freedom to bark, meow, chirp the way they choose to. Even when caged, pets are generally loved and cared for. Ahmedis on the other hand receive hatred and indifference from a large segment of Pakistani society. On the one hand, the Mullah brigade has disseminated venom against Ahmedis nationwide (and abroad), while on the other, the state supports this bigotry by criminalising the very existence of Ahmedis through laws that can best be described as discriminatory and cruel.

Since Ahmedis have been declared ‘Wajib-ul-Qatl’ (deserving of death) by numerous influential extremist groups, they are threatened on a regular basis by extremists living in our neighbourhoods. Ahmedi businesses are forcibly closed down, children harassed and homes attacked. False cases are registered, and with many interested in the prospect of hoors, false witnesses are readily available. Section 298-C of the Pakistan Penal Code prohibits Ahmedis from calling themselves Muslim or act “in any manner whatsoever that outrages the religious feelings of Muslims.” This includes saying the Azaan, calling the Ahmedi place of worship a “mosque,” saying the greeting of peace, aka Salaam, reciting the Quran in public, or saying the Kalima. How these acts cause pain to the feelings of “constitutional” Muslims is beyond me, and how not saying any of this brings solace remains an even bigger enigma. Faced with such bitter two-sided damnation, what would a sane Ahmedi do, if not leave the country?

Was the very pretext for Pakistan’s existence not the preservation of religious freedom? Would it therefore not be befitting of Ahmedis to campaign for a separate state on the same grounds? But since this would cause chaos and unrest in the land they call home, Pakistani Ahmedis patiently pray and continue to hope for better days. However, when persecution becomes overbearing for some, they are forced to resort to emigration, which is the Quran’s prescribed way to escape religious persecution (4:98).

Such a group of desperate Pakistani Ahmedis availed a chance to escape to Thailand (legally) in late 2010. They were hopeful of better reception at the regional office of UNHCR in Bangkok. Pending applications for asylum, the group of 131 Ahmedis was placed in detention for “overstaying their visas.” In the face of uncertainty and horror, 35 Ahmedis agreed to be deported to Pakistan. The other 96 preferred to stay in detention rather than reliving the persecution back home.

Mr Veerawit Tianchainan is the executive director of the Thai Committee for Refugees. At an honorary dinner in Pennsylvania recently, he spoke of the horrible conditions the detainees were kept under. Ladies had to take turns sleeping since there was not enough space in the cells for everyone to lie down at the same time. Faced with overcrowded living conditions, many children had only the floor beside the toilets to sleep on. One of the captives, a pregnant lady, later gave birth in these same conditions.

Months into the detentions, human rights groups started noting and campaigning for the release of these refugees. Mr Tianchainan spearheaded a valiant effort to remove the Ahmedis from these inhumane circumstances. He explained how it took his team weeks of hard work that included a great amount of paper work, multiple phone calls and a period of fundraising to gather the huge amount required to bail the detained Ahmedis out and secure their release. It is no surprise why the Pakistani government did not negotiate for the release of these poor detainees. The state supports laws and tolerates, and in many cases endorses, behaviour that leads to such emigrations in the first place. The fact that the majority of the emigrants preferred the misery of detainment in horrible conditions in a foreign land to life at home is strong reason for shame and compunction, if we have any. Ahmedi emigrants fleeing Pakistan generally belong to one of two groups: those personally under threat, including new converts, and those who have witnessed such threats being carried out, especially in the form of the murder of close relatives. Each of the Ahmedi detainees in Thailand had a similar tale, and theirs have yet to come to a close. Angry at a “safe exit,” extremist groups have stepped up their mischief. Families still in Pakistan are now experiencing even greater harassment. The persecution continues unabated as a whole nation watches in silence and apathy.

As the 96 refugees were released from the detention centre in Thailand last month, one child dreaded going back. “I don’t want to go back in that ‘big cage,’” she said. I can imagine that the mother’s reply would have been something like this: “At least we were treated like animals here, not any worse.”